The Meaning of Lakshmi

The Goddess shows how wealth can be liberation 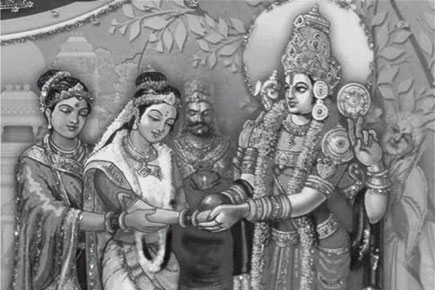 The Goddess shows how wealth can be liberation

As Hinduism made its journey from Vedic ritualism to Puranic devotion, it became increasingly monastic. This meant that the yogi, one who does not care for wealth, was given more respect in society than a bhogi, one who enjoys wealth. In such a society, Lakshmi was seen as the source of all problems. Rather than taking responsibility for their own inadequacies, human society blamed Lakshmi for the conflicts of society.

This tension between the yogi and the bhogi is a constant theme in the Puranas. The yogi Shiva is turned into the bhogi Shankara when he marries Parvati. The bhogi Indra learns from the yogi Vishnu how to transform rana-bhoomi or battleground into ranga-bhoomi or playground. Similar tensions can be seen in temple lore, where the language is regional, and the themes more practical.

The following is an Odiya story which is part of the temple lore of Puri Jagannath temple where Krishna Jagannath is worshipped along with his brother Balabhadra and his sister Subhadra.

One day, Balabhadra saw Lakshmi entering the house of a sweeper woman. He declared that she had been contaminated and orders his younger brother not to let her into the house. Krishna obeys and shuts the door of the temple. In the days that follow, to the great alarm of the divine siblings, no food is offered to them. On enquiry, they discover there is no food being cooked in the kitchen as all vegetables and fruits and cereals and pulses and spices have disappeared from the pantry and the market. There is not even a drop of water to drink. The siblings trace this catastrophe to their rejection of Lakshmi. Eventually Krishna apologises to his wife and begs her to return to the temple.

In this story, Krishna’s ascetic brother, the yogi Balabhadra, learns that notions of contamination and pollution make no sense to the goddess of wealth. These are artificial cultural norms created by humans to satisfy their craving for hierarchy. Food will satisfy without discrimination the hunger of all, be it a sweeper, a king or a god. In other words, food is satya, truth independent of human opinion. Notions of contamination, which is the hallmark of the caste system, is mithya, dependent on human opinion. When we discover that Lakshmi does not discriminate between saint and thief, that all hierarchies are manmade creations, then Lakshmi becomes a tool for liberation.

The following is a Telugu tale from one of the richest temples of India, the temple of Tirupati Balaji that enshrines Vishnu on earth.

The sage Bhrigu, a yogi, decided to pay a visit to Brahma, Shiva and Vishnu. He found Brahma too busy conducting a yagna with Saraswati to pay him attention, so he cursed Brahma that he would not be worshipped at all. He found Shiva too busy being intimate with Shakti to pay him attention. This time, his anger was a little less, and so he said Shiva would be worshipped, but not as he looks—only as an abstract symbol, the linga. He then moved to the ocean of milk, to Vaikuntha, convinced that Vishnu would surely pay him attention. But there he found Vishnu sleeping, his feet being massaged by Lakshmi. Furious that he mattered to none in the trinity, Bhrigu kicked Vishnu on his chest, where is located Srivatsa, the symbol of Lakshmi. Vishnu did not get upset; he understood Bhrigu’s frustration and apologised to the sage, and checked if Bhrigu had hurt his foot while kicking his chest. Watching Vishnu touch his feet, Bhrigu was happy. Then realisation dawned as to how foolish he was being: though he claimed to be a yogi, his attention-seeking behaviour revealed he was actually a bhogi.

Lakshmi did not appreciate Vishnu’s servility, whatever his reason. She was furious that Vishnu did not punish the sage for insulting the Srivatsa. She walked out of Vaikuntha in a huff and went down to earth. Vishnu followed her, desperate to bring her back, for Vaikuntha cannot remain Vaikuntha without Lakshmi. He decided to stay on earth until Lakshmi agreed to return. But he found no house; devotees would give him shelter until someone richer or more powerful came along. Finally, he saw the seven hills that reminded him of the seven hoods of his serpent Sesha on whose coils he reclined on the ocean of milk. This was Tirumala, the sacred hill. Homesick, he wished to settle here, but for that he had to marry the local princess Padmavati, born of a lotus flower. Her father, the local king, demanded a huge bridal price. Without Lakshmi by his side, Vishnu was the impoverished Daridra-Narayana, and so he had no choice but to take a huge loan from Kubera. This narrative demonstrates the value of wealth in society; even Vishnu needs wealth to get himself a wife and home on earth. One who rejects Lakshmi cannot expect to have a home or a spouse.

News of Vishnu’s marriage to Padmavati upset Lakshmi who came to the wedding and demanded her place in Vishnu’s chest. So Vishnu expanded his chest to accommodate his two wives. He placed the celestial Lakshmi (Sri-devi) on the left side of his chest, near his heart and the terrestrial Padmavati (Bhu-devi) on the right.

This Vishnu at Tirumala is trapped and needs the help of his devotees to repay his debt, so that he can return to Vaikuntha. He is called Venkat, he who can destroy (kata) bondage (vern), for in exchange of the wealth received, he grants his devotees the wisdom of yoga that explains the relationship one should have with wealth in order to be truly happy. This is further demonstrated in the ritual of giving wealth to transform Daridra-Narayana (the poor Vishnu) into Lakshmi-Narayana (the rich Vishnu): when Lakshmi is used to enable others to repay their debts, Vaikuntha is established and Lakshmi becomes a tool for liberation.