From his sartorial elegance to linguistic flair to sexual charisma, Nehru was the aesthete-moderniser 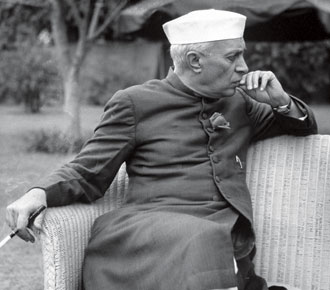 From his sartorial elegance to linguistic flair to sexual charisma, Nehru was the aesthete-moderniser

How low India has sunk in the sartorial stakes can be seen in the touting (by some) of Narendra Modi as a species of fashion mannequin—all on account of a few brightly coloured waistcoats. In the eye-wateringly dingy world of our professional political class, an ochre or green ‘bandi’ is seen as the acme of style, a jaunty change of pace from the monochrome netas and bureaucrats who offend our aesthetic sensibilities daily.

But Modi is as nothing compared with the true style icon of Indian political history, Jawaharlal Nehru, whose renowned jacket manages—somehow—to be both eponymous and a misnomer. We call it the Nehru Jacket, yet Nehru never really wore it, favouring instead the longer achkan. ‘His’ jacket is really (and more accurately) the Jodhpuri coat; but who cares? Any coat that is buttoned up to the throat and topped with a mandarin collar is referred to, outside India, as the Nehru Jacket. Blame the Beatles for that, or Time magazine.

This is not an essay about Nehru’s dress style. It is, more broadly, a meditation on Nehru’s aesthetics. But first we should get a few truths out of the way: Nehru is the only modern Indian politician to be a global romantic icon. I hesitate to call him a ‘sex symbol’ because he was, for much of his prime ministership, an avuncular man. But I only hesitate; I do not reject the notion. As Ramachandra Guha wrote in his essay, Verdicts on Nehru: The Rise and Fall of a Reputation, ‘Women adored Jawaharlal Nehru—Brahmin women, working-class women, Hindu and Muslim and Christian and Parsi women.’

Guha writes of how his mother ‘worshipped’ Nehru, and donated her gold bangles to the National Defence Fund in the aftermath of India’s humiliation in the 1962 war with China. Of course, part of the adoration Indian women had for Nehru was for him as the national leader. But there can be no doubting the effect of his slim build, his handsome face, his fine clothes, his red rose, on women who gazed upon him from afar. With all respect to Guha’s mother’s, there has to have been something psycho-sexual—however deeply embedded in the subconscious—in the offering up of jewellery to this strong and charismatic man who was not her husband. Thousands of women did the same.

Nehru had sexual charisma. He was a man unafraid of being attractive, and disinclined to be plain and self-effacing in the traditional Indian manner. Not for him the elaborate theatre of an abnegation of his sexuality, a la Gandhi. In his relationship with Edwina Mountbatten—and whether or not they ‘did it’—he offered India a delicious breach of interracial sensual taboos. Gandhi experimented (denial) with his nieces. Nehru carried on with the viceroy’s wife.

In truth, Nehru was adored, let us admit, because he was such a refreshing contrast to Gandhi. To an India that was parched of glamour in its leaders—to an India that had suffocated in the airless dowdiness of the Mahatma—Prime Minister Nehru was an aesthetic godsend. After the ascetic strictness of the freedom movement, with its sartorial scolds and the oppression of khadi, the Nehru of Free India brought a gust of panache into the nation’s consciousness. His message was: Indians didn’t have to be plain. Indians didn’t have to be drab.

Nehru’s aesthetic predisposition wasn’t confined to his clothes and bearing. It also controlled his politics and his thought. Any discussion of his ‘style’ must also include his political philosophy and preferences. His vision for India sought to ensure that the country embarked on a path that was seemly. He was obsessively careful to thwart ugliness. “Never speak to me of profit,” he told JRD Tata, “it is a dirty word.” His secularism was also an aesthetic inclination. He was repulsed by religious ideologues, and was forever concerned with how they made India look—especially in the eyes of foreigners.

Writing to Chief Ministers on 1 August 1951, Nehru said: ‘Whatever harm communalism may do in India, and it can do great harm because it is a disruptive and degrading force, the harm it does to India in other countries is tremendous. Immediately the higher edifice that we have built up in their eyes begins to crack up and totter and we appear to them as narrow-minded bigots following social customs which nobody in the world understands or appreciates.’ What will they think of us? This is a political concern. It is also an aesthetic worry.

India’s industrialisation, and the modernisation wrought by massive infrastructural projects, were also regarded as essentially elegant objectives, ‘a fascinating vision of the future which fills one with enthusiasm.’ In April 1948, Nehru the aesthete-moderniser wrote these remarkable lines, again in a letter to his Chief Ministers (I quote from Letters for a Nation, edited by Madhav Khosla, published recently by Penguin): ‘As I threw in some concrete, which was to form the base of the great Hirakud Dam, a sense of adventure siezed me and I forgot for a while the many troubles that beset us.’ The leader throws wet concrete, an adoring nation looks on. This perfect, escapist Nehruvian theatre sets India’s future in motion.

Evident in these few lines I quote—as well as in the majestic books he wrote— is his beautiful facility with language. His prose was irrefutably elegant, and it was the elegance of a man with an uncluttered mind. His use of the English language was his greatest stylistic marker, and while his prose was not always as stirring as Churchill’s, it was frequently the equal of the Englishman’s in clarity and cadence. Ugly English pained him, and he was to write in lament of the decline of the language in India in the early years after Independence. “The kind of English that is written [by university students] is deplorable. Indeed, it is not English at all.” Nehru had every right to pass stylistic judgment: After all, as the critic Chandrahas Choudhury has observed, ‘the most stirring sentences of Twentieth-century Indian writing in English were composed by Nehru’.