The Importance of Arundhati Roy

She is the creation of the very system she wants to dismantle, she is the anomaly that completes the system. Like Neo in The Matrix 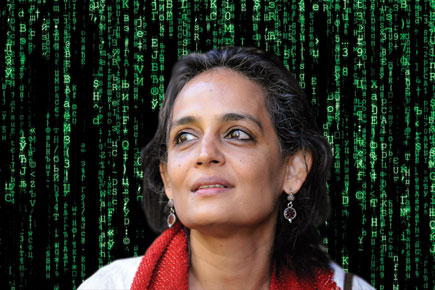 She is the creation of the very system she wants to dismantle, she is the anomaly that completes the system. Like Neo in The Matrix


It would appear that a beautiful woman has more at stake than others, so her battles for social causes have a deep sacrificial quality to them. Add to this her extraordinary literary fame, and it is natural that Arundhati Roy’s grouses are of national importance. People react to her in different ways depending on their intellect, affluence, psychiatric condition and how their own books are doing. It is often said that she ‘polarises’ the nation through her opinions but that is a myth. Indians do not need Roy to be infuriated with each other.

Her latest trouble follows a speech she had delivered in Delhi which said nothing new—that India should free Kashmir. At the time of writing this column, the Government is contemplating (aloud) arresting her on charges of sedition. She has issued an uncharacteristically tame statement claiming that her actions are a consequence of her love for the nation. Obviously, she does not want to go to jail. Despite her new nervousness, what her admirers say about her is true—that she is the conscience of the nation. What is disputable is whether it is a compliment.

It is futile to denude metaphors to their bare meanings, but in this case it might be useful to try. We know very little about conscience but what we do know is that there is an unattainable moral superiority about it, and that it usually transmits unsolicited advice, which is the opposite of what the mind really wants to do. But at the same time, it is fundamentally a creation of the mind, a creation that is meant to come in conflict with its maker. That is Roy. She is the creation of the very system that she aspires to bring down.

A weak economy and an immature democracy would systematically empower a particular class of people, first by giving them a social headstart through the early landed wealth of their ancestors, then by letting them cash their social gains for even greater affluence and influence. Some of them would then begin to challenge the injustices of the very system that made their righteous ire possible. A reason why Open receives so many story pitches from foreign-returned journalism students who want to do only bleeding-heart stories—the trauma of child labour, the plight of village women and the agony of stray dogs. And Kashmir. It seems every loaded intern wants to do an anti-Indian Government Kashmir story (and on the way, liberate Tibetans).

Roy is more talented, genuine and courageous than most people who would get along with her. But the fact remains that she is, more than anything, an anomaly that completes the system, a system that not only made her but also needs her for its own balance and survival. If this part is somewhat familiar, it is because it is derived from The Matrix trilogy.

There is a scene in The Matrix Reloaded where I usually imagine Arundhati Roy as Neo, the hero of the tale. It is the scene where Neo meets The Architect, the creator of the Matrix, the computer programme that has replaced the real world and its real life. In this scene, Neo wants to know, “Why am I here?” The Architect, who looks like Vint Cerf, one of the fathers of the internet, gives a tangential answer, “You are the eventuality of an anomaly, which despite my sincerest efforts I have been unable to eliminate from what is otherwise a harmony of mathematical precision. While it remains a burden assiduously avoided, it is not unexpected, and thus not beyond a measure of control, which has led you, inexorably, here.”

That Roy is here as the inevitable consequence of the very system she wants to dismantle, that she is an expected anomaly, becomes more evident in her other battle—against globalisation and a potent version of capitalism. The huge advance for her debut novel that brought the first tremors of critical and commercial interest in her work, the rise of the reading middleclass, the liberal movement, the many forms of media that conveyed her thoughts to millions, the international interest in Indian writers, and her own favourite Mac on which she writes her essays against capitalism, are all consequences of capitalism’s ways. But then capitalism also needs the imagination of soul, self-loathing, the delusion of introspection, so that people are not completely repulsed by their own greed. As The Architect would have said, “Ergo, Arundhati Roy.”