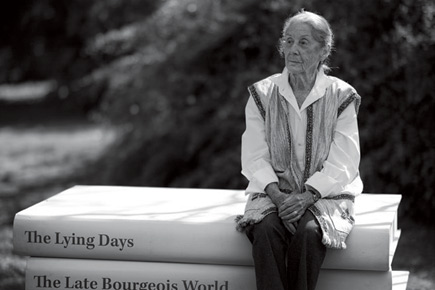 Certain writers become characters in the larger drama of history, and the text of their imagination struggles to keep pace with the context of their existence. When Mandelstam sang against Stalin, banishment was the reward; later, others would follow, daring the lies of the state and listening to the call of the conscience. Solzhenitsyn, communism’s most famous—and enduring— exile, had a great tradition of writers as freedom fighters behind him. So when the empire fell, it was the vindication of manuscripts burned and banished. In Eastern Europe 1989, the most romantic moment of freedom had its origin in a theatre called The Magic Lantern in Prague. The Velvet Revolution, led by Václav Havel and other amateurs, was a writers’ ball, and in the end, the philosopher king was in place. Elsewhere, there were more flamboyant manifestations of writer as street fighter, and no one could beat the French at that. Sartre to Camus to Malraux to Bernard-Henri Lévy, it was the sight of the writer stepping out of the study and fighting for the wretched. Mario Vargas Llosa and Michael Ignatieff even went to the extent of contesting elections for the highest political offices in their respective countries.

Writing, for some, is not a disengagement from the world. The life of Nadine Gordimer (1923–2014) was inseparable from the struggle of Black South Africa. She was the white writer in a country where the colour for so long stood for racial domination, and she, an advocate of ANC’s revolution, became ‘a minority within a minority’. When she won the Nobel Prize for literature in 1991, it was seen by some, and justifiably so I think, as yet another instance of the Swedish Academy’s habit of making the writer’s extra-literary achievements the winning factor. And the best of her oeuvre—A World of Strangers, A Guest of Honour, The Conservationist, July’s People—mapped the physical as well as psychological topography of a society in trauma. The ‘whiteness’ of the writer was a social as well as moral obligation, and in her own words, the white writer “has to try to find a way to reconcile the irreconcilable within himself, establish his relation to the culture of a new kind of posited community, non racial but conceived with and led by Blacks”. This moral position enhanced her imagination, and the backdrop of a freedom struggle must have made it irresistible to the Swedish Academy.

I met Nadine Gordimer when she was in Delhi in November 1995, a year after Nelson Mandela became the president of post-apartheid South Africa, to deliver the Nehru Memorial Lecture. In our conversation (published in The Indian Express), she explained what it was like to be seen as a writer whose identity was coloured by her political positions—a white radical against white racism: “When people read my books, they look for what they know about South Africa. They want to reinforce their own beliefs. There is a refusal to look beyond the political aspect. But my fiction is more than that…I’m aware that my social role has conditioned the general perception the outside world has of my works.”

“Does the liberation’s day after make your identity more ambiguous?” I asked her.

“You are putting me in a category I don’t belong. Long ago, in the 50s, when all the whites and the Blacks were totally separated, there were whites in the Black struggle. Someone like myself, who has identified with the Black struggle, with the ANC, could not have approved of racial stereotypes.”

“The liberal conscience of South Africa continues to have its best expressions, at least in literature, in white writers like Breyten Breytenbach, Coetzee, André Brink, and of course, yourself.”

“Let me tell you one thing. Breyten Breytenbach is not liberal. We are radicals. You have to make this distinction. True, white writers are more read outside. We had the privilege of better education.”

“Reading your essays, it seems you have a special affinity towards writers with what you call ‘amputated sensibilities’: Camus, Mi•osz, Kundera…”

“Like them, I have been part of a cruel history. I was born into it. As you grow up, if you have a sense of injustice inside, you begin to peel off the privileged prejudice you have. Camus is very special to me. He was very much like me. Born in Algeria, he was a writer influenced by the moral questions of race and power. His sense of extra-literary responsibility was natural, like mine.”

In the course of our conversation, while dreading the possibility of an African gulag in the context of Achebe the exile and Soyinka the fugitive, she said: “The word is in danger.” The words of Nadine Gordimer made South Africa a less dangerous place—and literature an argument for freedom.