The Decency of the Atheist

The sentiments of the rational are hurt every day by believers. 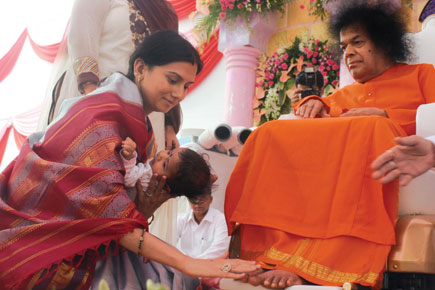 There’s something frightening and melancholic about knowing that your country, your life even, is run by people who believe in the powers of a godman.


It is confusing to see a healer in a wheelchair, but the miracle man made the irony disappear. When Sai Baba visited Bombay this week, waiting to fall at his feet were some of the most powerful men in the country. It was a familiar world at his feet, where usually presidents, ministers, RBI governors, corporate chiefs and Supreme Court judges arrive. There is something frightening and melancholic about it—to know that your country, your life, in a way, is run by people who believe in the powers of a godman.

The endurance of Sai Baba as some form of a god is astonishing. He has been publicly accused of sexual abuse and his miracles would increasingly appear naïve today even to his devouts (PC Sorcar once claimed he was just a bad magician. Sorcar, famously, converted Sai Baba’s sandesh-from-thin-air into rasagulla). Rationalists have for long tried to discredit Sai Baba. Once they even filed a case against him for producing gold chains from thin air. They said that if they were created through supernatural means, they devalued the precious metal by increasing its supply. But in the end, Sai Baba has triumphed. Faith, as always, has beaten reason.

Some people are repulsed by the sight of influential men falling at the feet of godmen. The sentiments of the believers in the paranormal are protected by law, but those who believe in reason cannot be guarded in this manner. They go through life, especially in this country, not with the chuckle of superior disdain as people imagine, but on some days with great rage. Days when they are reminded that men who run the country seek extraterrestrial help, that criminals donate kilograms of gold to temples to absolve themselves of their latest crime.

There is this unsung decency about atheists, as they are loosely called. They know there is no hot weather hell, there is no punitive rebirth as an earthworm, yet they never hope to benefit through evil. They do not create traffic jams, they do not create noise, their charity is never a pathetic transaction. In their moments of confusion, at the most they would say, ‘I believe in a Force’. It is not a great line, but it is a pure line—they really do not expect the ‘Force’ to do them any favours, like increase their salary. They just go about their lives without harming anyone, even though they know nobody is watching. You may say this is too much generalisation, that most bad people are bad because they are godless. But that is the astonishing thing. From what I have seen, most criminals (and criminals who have given themselves fancier names) are great believers in God.

There is a spiritual movement among the urban affluent to understand life through a guru who is differently dressed but is not expected to do magic. Sri Sri Ravi Shankar has filled this slot through entrepreneurial brilliance.

A few years ago I interviewed him at a Malabar Hill house (of course). On the floor were seated Vinod Khanna, Nagma and others like them. On a throne was Sri Sri. I was supposed to interview him in front of his devotees, some of the most influential people of Bombay. As I sat in a chair facing Sri Sri, there were gasps. I was expected to sit on the floor (a journalist before me indeed had sat that way). But then I am such a boor.

I asked him questions like why he spent so much time with the rich (Vinod Khanna laughed in a good-natured way at the foolishness of a young reporter). Sri Sri would reply by saying my facts were wrong (and the gathering would laugh at me), or he would snub me by saying that if only I smiled more often I would understand everything (and the gathering would laugh again). As I was leaving, he said something about me (which I could not get) and the crowd burst out laughing, this time louder.

I really do not know why these people were there on the floor, listening to someone who said something like, ‘Don’t fall in love. Rise in love…We are all one.’ Surely, they have heard all this before they met him?

People who do not seek divine mediums, who know that ‘scepticism’ is merely a name given to higher intelligence, they do have their just rewards. They go through life with a clarity of mind which is like a clear, beautiful day.

It is also called joy.