The Death of Coolie No 1

It’s a millionaires’ ball in Bollywood. Slumdogs and other romantics are no longer welcome 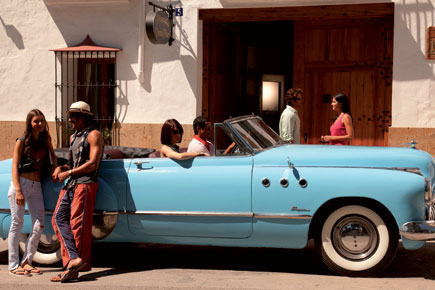 It’s a millionaires’ ball in Bollywood. Slumdogs and other romantics are no longer welcome

“Mere Paas Maa Hai” is the famous riposte the younger brother gives to his elder brother’s boasting about his ill- gotten gains (Deewaar, directed by Yash Chopra, 1975). While family values always trump financial gain in Hindi films, wealth is an important marker of class as well as a means of enabling the increasingly extravagant lifestyles of the films’ characters.

After Independence, Nehruvian socialism and the enduring influence of Gandhi’s ideals about poverty were inescapable. In the 1950s, the association of wealth with colonial Anglicised lifestyles fused ideas of material advancement and Western lifestyles as something to be rejected. Hence the wealthy Neena (Nargis), imprisoned for murder, declares that ‘Foreign flowers cannot flourish on Indian soil’ (Andaaz, directed by Mehboob Khan, 1949). While Bimal Roy’s films often examined the poor and the marginalised, Raj Kapoor chose to depict them as noble and the rich corrupt. In Shree 420 (1955), the wealthy Seth Sonachand Dharamanand is dishonest and evil (his car registration number is 840, a double of 420), whereas the impoverished Raj and Vidya are indisputably good. The two women in Raj’s life, Vidya (‘Knowledge’) and Maya (‘Illusion’), are distinguished by a love of virtue and kindness on one hand and a love of money and lack of good qualities on the other. Raj moves between the two merely by changing his clothes, but ultimately, when he becomes aware of the suffering of the poor and the immorality of the rich, good prevails.

Many other films show the lure of wealth but love and honest poverty are always the hero’s choice, even though viewers may enjoy seeing the world of wealth on screen and revel in songs such as Shailendra’s lyrics to money Teri dhoom, sung by Dev Anand’s black marketeer (Kala Bazar, directed by Vijay Anand, 1960).

A recurrent theme was rich-poor romance, so the rich boy falls for the poor girl in Bobby (directed by Raj Kapoor, 1973) or rich girl-poor boy in Aan (directed by Mehboob Khan, 1952) and Jab Jab Phool Khile (directed by Suraj Prakash, 1965). The story often hinges around the revelation that the poor partner’s family was originally rich but deprived of its fortune for a range of complicated plot reasons such as the suspicious father rejecting his child in Awaara (directed by Raj Kapoor, 1951), or illegitimacy in Trishul (directed by Yash Chopra, 1978), while the swapping of babies has remained a frequent motif from earlier films such as Munimji (directed by Subodh Mukherjee, 1955),

In his Angry Young Man roles, Amitabh Bachchan usually grows up poor but achieves dignity and respect through his speech, dress and gesture while often accumulating money illegally. Yet, despite this powerful presence, other films began to shift to showing rich characters who were not morally tainted by wealth but who lived enviable lifestyles adorned with large houses, the finest fashions and overseas travel. A new kind of modern style for the wealthy began in the 1960s, in films like Yash Chopra’s Waqt (1965), although the zamindars and thakurs continued to follow the old style of mansions whose well- known feature was a magnificent split staircase leading to a galleried upper storey.

The Angry Young Man’s descendants continued to fight poverty in the urban jungle, while the comedy film addressed the issues of wealth and poverty, notably those of Govinda where he moves between the wealthy and the poor via the plotline—whether as a poor man pretending to be rich in Coolie No 1 (directed by David Dhawan, 1995), or a rich man pretending to be poor in Hero No 1 (directed by David Dhawan, 1997), although the common theme is that he teaches the spoilt rich girl a lesson.

However, while Hindi films revelled in the melodrama of rich and poor, showing real poverty has been disparaged, whether in the movies of Satyajit Ray or those of Westerners such as Danny Boyle’s Slumdog Millionaire (2008). In the last 10 or 15 years the poor have begun slowly to vanish from the mainstream Hindi film now known as Bollywood which is often preoccupied by showing the superrich in films such as Karan Johar’s Kabhi Khushi Kabhie Gham (2001). In the latter, the adopted son marries a ‘poor’ woman, whose family own a sweetshop, leading to his adopted father disowning him. The family has magnificent houses, between which they travel in their luxury cars and helicopters. Their celebrations of Diwali frame the film, seeing the separation and reunification of the family, bringing together wealth, religion and familial love.

A recent group of films has moved towards focussing on self-fulfilment and vocation, mostly by children of the wealthy. Wake Up Sid (directed by Ayan Mukherjee, 2009), the Akhtar siblings’ Dil Chahta Hai (directed by Farhan Akhtar, 2001) and Zindagi Na Milegi Dobara (directed by Zoya Akhtar, 2011),and 3 Idiots (directed by Rajkumar Hirani, 2009) all emphasise that self-fulfilment and being true to oneself will lead to true happiness. The poor have now all but been erased, and the middle classes are barely seen. The wealthy are the internationally rich, defined by their consumtion patterns, who can devote all their energies to finding themselves, often through travel and romance.

The new image of the rich is due in part to changes in the broader culture of cinema. In the 1950s, filmmakers were often closely associated with leftist cultural groups, such as IPTA (the Indian People’s Theatre Association) and the Progressive Writers. They envisioned a new future for the new nation, with often lip-service being paid to Gandhi while more actively following and promoting Nehru’s socialism. The new middle classes who have emerged in such large numbers since the 1990s are mostly, by definition, upwardly mobile, and seek consumerist lifestyles and wealth. They also come from different castes, regions, etcetera, and their culture is shaping contemporary Indian culture, including cinema, where India is no longer an economic ‘basket case’ but a major power, where wealth is to be had by those who work for it.

It is this group which has largely brought the new government to power and supports ‘Hindu Family Values’ of religion, the family, etcetera. This may be seen as a modern form of the traditional Purusharthas, or aims of man, namely kama (‘pleasure’), dharma (‘religion’) and artha (‘wealth’) for the householder, while the ascetic life is valued for those who seek it. The Hindi film remains the best guide to modern India and its imaginings of the rich, their lifestyles and their values show us the place of wealth among a host of other Indian values.