One misconception foisted by moral science classes is that we learn best from the lives of the worthy. There is at least as much, if not more, to be learned from excess and depravity 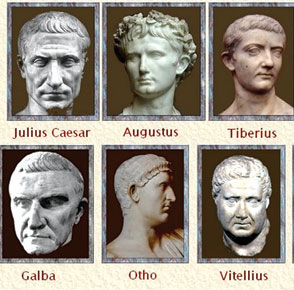 Anyone in public life will confirm that reputation matters more than truth. Reputation encroaches upon facts, rather than the other way around. The memory of a dozen Caesars, from Julius to Domitian, who ruled a vast Roman empire two thousand years ago, has always been embellished by what people thought they did, or heard they did. Gossip, after all, is the only defence against paid history. Gossip is the smoke that twirls out of a thousand small bonfires.

Gaius Suetonius Tranquillus, born in AD 69, is the defining historian of that age. He weaves street narrative with official document, as faithful to great events as to opinion and chatter about pettiness and much worse. This is fertile writing at its most fecund. There is almost too much delight on these pages. Suetonius’ focus is personality, an approach perfectly suited to rulers who quickly became dictators with effective, if not always legal, powers over life and death. The story of two emperors, hero and anti-hero, Julius Caesar and Nero Caesar, open a window into this scintillating book.

One misconception foisted by moral science classes is that we learn best from the lives of the worthy. There is at least as much, if not more, to be learned from excess and depravity. Of course probity and power are never good friends. Despite his exploits on the battlefield, and great service to Rome, Julius Caesar has to bribe his way to office, repeatedly. Julius told his mother on the morning of an election for Chief Priest that if he did not return home as victor he would not return at all. He had, of course, taken out insurance with some flagrant distribution of cash, but as a good Italian boy he was taking no chances with Mama.

Sigmund Freud was born 19 centuries later, but he would have an elite clientele in first- century Rome. Interpretation of dreams was common practice. Julius was distressed when he dreamt that he had raped his mother, but hugely relieved when told that this meant that he would conquer the earth, our Universal Mother. Those predecessors of Freud were clever.

The eponymous Caesar did conquer much of known earth; his military genius is indisputable. His strategic understanding, his leadership during a crisis, and commanding loyalty of troops framed his success. Like the finest generals, he wrote superbly and spoke with the magnetic clarity of an orator. When he left to battle his most famous enemy, Pompey, he told his household (Mama again), “I am off to meet an army without a leader; when I return I shall meet a leader without an army.” Confidence did not make him complacent or arrogant. He had the good sense to retreat after the encounter at Dyrrhachium, in order to fight another day. When Pompey did not pursue him, Caesar said, contemptuously, “He does not know how to win wars.”

His most famous remark, “I came, I saw, I conquered,” was not a boast; he was referring to the speed of victory. During a campaign, his soldiers were not permitted disobedience; but as comrades they had the right to laugh at him, and did. When the army returned to Rome after conquering Gaul (now France), the soldiers sang: ‘Home we bring our bald whoremonger | Romans, lock your wives away! | All the bags of gold you lent him | Went his Gallic tarts to pay.’

His enemies could be, and were, caustic. The Elder Curio called him “Every woman’s man, and every man’s woman.” The second bit was exaggeration. His straight love life is famous enough, thanks to Cleopatra. It is also true that Caesar divorced his Roman wife, Pompeia, “Because I cannot have members of my household accused or even suspected.” Caesar’s wife had to be above suspicion, but not Caesar himself. Rulers lived by different rules.

But even Caesar must die. All of you have heard about omens before the Ides of March was recorded by Suetonius. Spurinna, a seer, was among those who had warned Julius Caesar about the danger to his life. As he left for the Senate on the morning of the Ides of March, he told Spurinna that she had proved to be a false prophet. Her answer: “Yes, they have come but they have not yet gone.”

Freud might have given up altogether on psychoanalysis after fourteen years of Nero Caesar. Nero became emperor at 17, and handed over power to his mother Agrippina the Younger. So far, so hum-haw. The trouble with handing over power is how to get it back. Nero’s love-hate relationship veered towards incest and ended with matricide. He sought mistresses who looked like Agrippina, and tried to poison her thrice. He failed because she had pre-empted him each time with antidotes. Sharp mama. Before a fourth attempt, Nero kissed his mother’s breasts in a macabre farewell. Agrippina survived this plan to drown her by swimming ashore.

When she was eventually killed, Nero rushed to her corpse and coolly discussed the merits of her various limbs. Then followed the nightmares. He felt pursued by his mother’s ghost, accompanied by Furies carrying whips and burning torches. Nero sought mercy from the ghost through Persian magicians. No help. This was compounded by dreams of his second wife Octavia (also murdered, naturally) pulling him down into darkness where hordes of winged ants swarmed all over him.

One can hardly blame Octavia. Having failed once to strangle her, Nero divorced Octavia and then executed her—incongruously— on a charge of adultery. He kicked another wife, Poppaea, to death when she was pregnant, despite doting on her, because she complained that he had come late from the races.

His father, Gnaeus, who in his time was charged with treason, adultery and incest with a sister, at least got one thing right. Any child born to him and Agrippina, he noted acidly when Nero arrived in December AD 37, could only be detestable and a public danger. Nero obliged on both counts.

He began his reign pretty well, though. A good publicist might have branded him an economic reformer, environmentalist and pacifist. He set up a board of arbitration for tax disputes, banned sales of junk food at wine shops (permitting only greens and beans) and declared, as official policy, that there would be no further expansion of empire. During a visit by the Armenian king, Tiridates, he closed the double doors of the Temple of Janus ‘as a sign that all war was at an end’. He stopped charioteers, till then a privileged breed, from robbing and swindling citizens. Surely his bravest decision was putting a cap on lawyers’ fees.

It was a lust for art that brought his downfall, not hunger for power. Rome made Nero a Caesar, art made him a tyrant. Once he started music lessons, there was no mercy. He entered contests and naturally won each of them; event managers quickly realised that prize money was the perfect bribe. No one was allowed to leave the theatre, even women giving birth during his performances. Bored men escaped by shamming death so they could be carried off. Nero once sang through an earthquake in Neapolis. An audience was punished if applause was weak, and he issued only written orders to troops in order to save his voice.

He actually did sing through the fire that destroyed Rome over six days and seven nights. He watched the conflagration, enraptured by ‘the beauty of flames’, while he sang The Sack of Ilium. He looted abandoned mansions, and then appealed for donations to a ‘Fire Relief Fund’, much as newspapers do these days after a natural disaster. Not much is new.

Song, sex, avarice and waste were his forte. Gender was never a problem in sexual taste. He raped both boys and vestal virgins, and married his freedman Doryphoros. When he sailed down the Tiber temporary brothels were set up along the banks. He spent his fortune on palaces and gambling (4,000 gold pieces on every pip of dice), fished with a golden net, shod his mules in silver, installed a 120-foot statue of himself in his palace, whose main dining room had a circular roof that revolved in time with the sky. Sounds a bit like a Dubai mall, but never mind. “True gentlemen,” said Nero, “always throw their money about.”

This made him, inevitably, destitute. Power without money is an invitation to extortion. His nobles had an option, ruin or death. When his armies rose in revolt, Nero sought the comfort of illusion, pretending nothing was happening. As rebels reached Rome and his bodyguard fled, he sought weapons to protect his stage equipment and ordered concubines to get a male haircut and carry Amazon shields and axes. There was nowhere to go. Nero cried out for an executioner and still found no one. “What?” asked the emperor, “Have I then neither friends nor enemies left?”

Before he stabbed himself, there was a last sigh: “Dead! And so great an artist!”

You can’t make this up. The Twelve Caesars rocks.

We must record one bit of luck. If Julius could get July and Augustus August, Nero thought he deserved a bit of space on the calendar as well. He honed in on April, and renamed it Neroneous. Thank heavens it never caught on. It would have aborted one of the most famous lines in English poetry. I can’t imagine TS Eliot writing ‘Neroneous is the cruellest month’.