The Comic Side of the Right Wing

They are funniest when they do not mean to be so 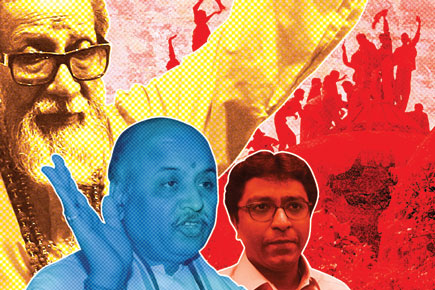 Indian nationalism is a great situational comedy, though its characters somehow do not hear the deafening sound of canned laughter.


When I was a boy I was a Hindu nationalist. Even though my mother tried to raise me as a good Christian, and I was forced to go to church on all public holidays, as a patriot I believed that to be an Indian your mind has to be Hindu. I was infatuated with my name because it sounded Hindu, and I was grateful I was not Wincy or John or something like that. Growing up in a Brahmin colony in Madras, I associated the austerity of bare feet, braided hair and the smell of jasmine as the true character of my nation, and I considered shoes, candles and the crucifix as foreign. And, the prospect of enlightenment as you are meditating and becoming an anthill made more sense to me than the promise of a paradise full of tilted angels playing harp, an instrument I am yet to see on earth. In the company of two other Brahmin friends I slowly grew to believe that ancient Indians, and only they, knew secrets that could lead me to great hidden knowledge. Indians were the best race, the greatest civilisation, others were all nomadic fools.

Then, as the Babri Masjid issue gathered force, I slowly began to realise that my type of nationalism was a form of insanity. One of my friends started saying that there was historical evidence to prove that the Taj Mahal, too, was a temple once (curiously, it would be the theme of one of RK Laxman’s cartoons). When that friend eventually entered IIT, he said that he would never go to America. “Through transcendental meditation, you can sit here in Madras and visit any country in the world.” (He is now in San Francisco.)

Indian nationalism, I would soon realise as I became a journalist and left Madras, is a great situational comedy, though its characters somehow do not hear the deafening sound of canned laughter. I would witness this from very close very often. Like, the days after the murderous riots in Gujarat.

One late night in Ahmedabad, after the violence had subsided but there were still stray killings, I went to meet VHP’s Praveen Togadia. He was sitting on a swing in his lawn, and he said that I was not allowed to enter his house because I was a Christian and I would pollute his home. So I sat in the lawn as he swung. “I can cut you into many pieces and send them to Pakistan,” he said, “Oh, sorry, not Pakistan. You are Christian. I will send your pieces to England.” He stopped to look at his own index finger which was pointed at me. “The index finger. Very few men know how to speak with their index finger. The great Nazis, they knew.” His neighbours and police cover gathered around the walls to listen to us. Togadia pointed to me and told them how funny my Hindi was, how I could not speak the national language, how I was not Indian. My next question to him was in Malayalam. He giggled.

A few months before that encounter, if I remember correctly, I had gone to a distant Mumbai suburb to meet the first Hindu suicide squad created by a retired lieutenant-colonel Jayant Chitale. When I reached a deserted playground, the colonel asked the boys to assemble. The underfed adolescent boys giggled shyly and stood in line. I think even they found it funny when the colonel said they were the Hindu suicide squad and that they would terrorise Lashkar-e-Toiba.

In some prominent men, who looked sane and wise, I had to just scratch the surface to see their incurable conviction that Hindus are historically special. A senior scientist from the Indian Institute of Science once told me, as a matter of fact, “A reason why we were so superior in the olden days might have been because of a technology transfer from aliens. Our gods may have originally been representations of extraterrestrial visitors.”

Sometimes what makes a highly infuriated conservative comical is not his convictions but his own surprising softness. Days after Raj Thackeray’s goons first attacked north Indian migrants in Mumbai, I interviewed him. He was extremely hostile because I represented the English media and he didn’t like us. “Why are you guys after me?” he asked. I told him, “Because you’re an attractive personality.” I think he misunderstood ‘attractive’ for handsome. He blushed and he was polite and pleasant for the rest of the interview.