Tank Tops in the Islamic World

Istanbul and the deceit of female modernity 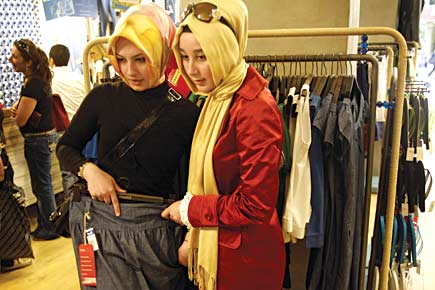 Istanbul and the deceit of female modernity


Last week in Istanbul, I did what I was supposed to do. I walked down the cobbled ways, rode a tram, went to see medieval mosques and markets and towers, and I applied the adjective ‘byzantine’ as if I used that word every day. I took a ferry from the European side of Istanbul, crossed the Bosphorus and about 30 minutes later, reached the Asian landmass. Standing at the edge of Asia, I looked at Europe, which was just a few hundred metres away, and I joined the family murmur about how Europe looked so much better. I accepted the cliche of almost all travel writers that Istanbul, like light, had dual properties. It was Europe at a 70 per cent discount. It was also the Middle East, as the CIA’s website categorises it, where the muezzin’s lament filled the air with predestined periodicity. People sat on the sidewalks and consumed liquors of all colours, solitary pretty women in tights smoked as they watched the world go by. Round the bend, men faced Mecca and crouched. Even the first taxi driver I met was evidently European before he started the car and Asian once he started driving. (I soon tried to wear the seat belt but he stopped me as if it was a personal insult. Imagine a Caucasian stopping an Indian from wearing the seat belt. That happened in Istanbul.) The city’s famed mosques, too, looked exactly like cathedrals inside, which some of them once were.

At the Blue Mosque, a tourist favourite for many reasons, its easy pronunciation being the most underrated of those reasons, three bearded conservatives sat in their various islands of isolation, silently surveying scores of women in trousers and skirts gawking at the sacred walls and the magnificent ceiling. Earlier, at the entrance of the mosque, I had seen an adolescent boy standing with blue sheets to wrap women in immodest clothes. But he was not sure about the definition of immodest clothes. He stood there baffled, holding the sheets for a while. Then he started handing them out to almost every woman until a senior came and scolded him. He asked the boy to hand over the sheets only to women in shorts or mini-skirts. Small tops, spilling breasts, naked arms and visible navels were alright.

Every moment in Istanbul is a confirmation of its own alleged modernity and its proud lack of shock at the sartorial and romantic audacity of European tourists. The image of Istanbul I carry is of a feverish Saturday midnight in the Taksim area—hundreds of pretty girls walking down narrow cobbled alleys, musicians serenading old women, the chaos of every pub playing different music, two louts throwing beer caps at a girl who looked more annoyed than outraged as she shook her head with an unhappy smile. Taksim on a Saturday is a sight that a particular kind of people ‘who are in the business of definitions and analyses’ use to tell the story of how an Islamic society can indeed be very modern too. But what exactly is modernity? Smoking women in tights? Is modernity merely the inverse measure of a skirt’s length? Is it primarily a female responsibility? Is there a definition of modernity that does not include women? What is the role of men?

The point is modernity is one of our favourite myths. Beyond the visual icons of surface freedom there is nothing much to it. So we know girls in spaghetti tops who wait for the men in the house to finish their meals before having theirs. And we know several men who wear expensive suits who abandoned the girls they loved because they did not have the courage to antagonise their fathers.

The optics of modernity is particularly enchanting in Istanbul, but eventually you begin to notice a few things. Like, say, there are no raunchy hoardings. And there is not much kissing and fondling among Turks on the streets. Also, at a Burger King counter, at the reception of a resort and in various other places, I was asked by men if I was a Muslim. And they looked disappointed when I said I was not. They said in a good-natured way, “You must become one”.

One bare-chested waiter on a boat who had just served beer to bikini-clad girls and had unsuccessfully flirted with them, turned serious when he told me that I should “try Islam”. He inhaled and exhaled and said, “It feels good.” There was something pleasant about the way those men said their things, and something comical about meeting a sudden Islamic evangelist in a boat full of half-naked women.