Remembering him as just a poet would be doing him a profound injustice. 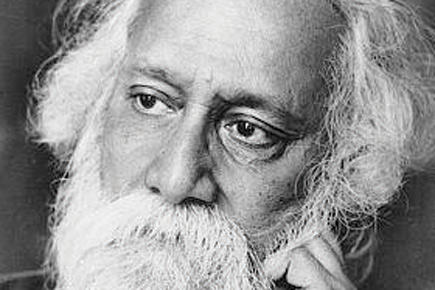 Remembering him as just a poet would be doing him a profound injustice.


There are some books you buy due to what behavioural scientists call the ‘tyranny of the should’. Like the superb three-volume box set of The Complete Annotated Works of Shakespeare (I have it), which you will never touch, but you feel some sort of satisfaction that you have it all, and delude yourself with the weak promise that some day you will get down to reading Othello, or even, Titus Andronicus. But the other day, for no particular reason, I opened a volume of one such ‘interior décor’ work—The English Writings of Rabindranath Tagore—and idly flipping through it, reached an astonishing conversation between Tagore and British writer HG Wells.

We remember Wells principally as the author of The Invisible Man, but he was far greater than that: he wrote much more than science fiction, and was a powerful essayist, political philosopher and, paradoxically, both historian and futurist. Robert Goddard, the father of rocketry, and Hungarian scientist Leo Szilard, who developed the theory of nuclear chain reaction, were both inspired by Wells’ stories. In The Shape of Things to Come (1933), Wells uncannily predicted World War II.

The conversation starts off with Tagore saying: “The tendency in modern civilisation is to make the world uniform. Calcutta, Bombay, Hong Kong and other cities are more or less alike, wearing big masks which represent no country in particular.” Responds Wells: “Yet you don’t think this very fact is an indication that we are reaching out for a new human order that refuses to be localised?”

“Our individual physiognomy need not be the same,” replies Tagore. “Let the mind be universal. The individual should not be sacrificed.” Globalisation and the blurring of cultural boundaries and a common world order, and this is 1936. Today, 74 years later, we still have nothing new to add to these ideas.

And it goes on. They begin talking about a common language for all of mankind. Says Tagore: “The time for five-mile dialects is fast vanishing. Rapid communication makes for a common language.” Wells agrees. “It is necessity that will compel us to accept a universal language.” I feel a sense of anticipation. The way the dialogue was moving, were these two men, both in their 70s, going to visualise something like the internet that has collapsed the globe and given us universal connectivity and, therefore, empowered us with something like a common language?

And I am not disappointed. “Take radio, which links the world together,” says Wells. “And we cannot prevent further invention. Perhaps, in the future, when the present clamour for dialects and national languages for broadcasting subsides and new discoveries in science are made, we shall be conversing with one another through a common medium of speech yet undreamt of.” Yes, e-mail and the world wide web. And Tagore can already predict that when that happens, the way we deal with everything will need to change. “We have to create the new psychology needed for that age,” he says. “We have to adjust ourselves to the new necessities and conditions of this civilisation.” And while Tagore says this dispassionately, Wells is more pessimistic. “Adjustments!” he says. “Terrible adjustments!”

This conversation took place 48 years before the internet as we know it was invented. Yet, these men could think that there could be a technology that would theoretically be able to connect everyone on the planet. The mind would be getting more universal, yet individuality would be retained. Indeed, the net, while bringing us all together, has let us flaunt our individuality. Blogs are just the tip of the iceberg. And we have had to adjust and change. We are grappling with issues like new ways of work and play, privacy, security, even the extreme changes the net has rudely shoved into our personal and social relationships. How much more prescient could these men have been?

Tagore will be 150 years old in a few weeks. We remember him as a poet and writer. Instead we should celebrate him as an extraordinary mind.