Cricket, growing up, was cricket alright—plain and simple. Am not so sure now 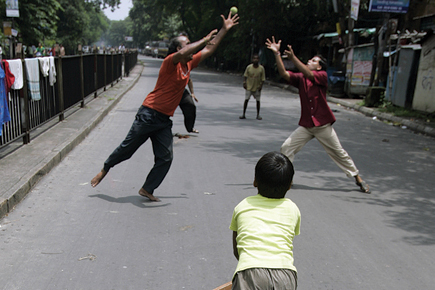 Cricket, growing up, was cricket alright—plain and simple. Am not so sure now


So India is out of the T20 World Cup. Well, what to do? But what can’t be denied me is that every time I watch a T20 match, I remember my childhood gully cricket days in Kolkata and Mumbai. What fun it was! Every day, sharp at four in the afternoon, from September to March, we boys would assemble in the concrete compound of our colony in Kolkata with bat and ball. The wicket would be drawn out in chalk on the wall of one of the buildings. The bowler’s-end wicket would be a brick. Teams would be chosen. This was a process of inevitable humiliation, since the two captains would alternate in calling out a name each, and we would all know how our recent performances had been evaluated. What a shame it was to be the last boy standing and being placed in a team because the team had no other choice.

More than the conventional form of the game, we preferred the ‘last man batting’ one, when a lone batsman, after he had run out of partners, would continue to bat till his bitter end. Most games were fractious; dismissals—especially LBWs—were debated heatedly. When push came to shove, if the batsman declared out was the one who owned the bat, he would just desert the game and go home with his bat, leaving everyone stranded. If the fielding team was firmly convinced that the batsman was out, and the batting team wouldn’t agree, the captain of the fielding side would shout “Fielding declared!”, and his team would go off to pursue other activities, leaving the batting team to sulk. But the next day, at four, we would be back out there again.

The balls used were made of rubber, because tennis balls were a luxury. They were used only when our colony’s team played the team from a neighbouring colony. These were often a series of matches—three or five, and our honour, and our colony’s honour, rode on them. Our elders—boys who were 16 or more—would form the selection committee. They would huddle together and discuss the merits and current form of each one of us, and then hand us a piece of paper on which the names of the lucky 11 were written neatly. The rest of us would have to be content with cheering our team at the matches.

The big menace was irate adults whose windows would be broken by lofted sixers. Periodically, our residents’ association would circulate notices banning cricket in the colony. We would then relocate to a nearby street, which was not as much fun because there was no off-side or leg-side; you could score only by hitting straight. But there was an old gentleman there who would sit on his verandah and watch our matches with avid interest. If someone hit a four or a six, he would clap his hands and shout, “Daphne! Daphne!” Thirty-five years later, I am still trying to figure that one out.

Finally, we found a safe haven on a small patch of grass at the back of our colony. The only hitch was that there was a high wall which blocked off the leg side. So the fielders at square leg, mid-wicket and mid-on would stand on the other side of the wall with no view of the proceedings.

eriodically, a ball would appear above the wall, with no prior warning, and they would have to run after it, or even make a catch out of it. It was a tough life, our childhood cricket, but I don’t remember ever thinking that it was tough, then.

We moved to Mumbai, where, at the first colony we stayed in, I encountered some strange rules. Any right-handed player 12 years of age and above had to bat left-handed and vice versa! I was 12, and this was no fun. Of course, the matches were shorter, and we could play several matches per day. But though I could see the logic of this, I never managed to see the point of it. Why play your favourite game with one arm tied behind your back?

Thankfully, we moved within a year, and in our new apartment building, the rules were conventional. We played and we were happy. Windows continued to be broken, and though there was much gnashing of teeth among the adults, no action was taken. This was, after all, Mumbai of the 70s, the Mecca of Indian cricket. Glorious days, those were. And so what if India’s out of the T20 World Cup?