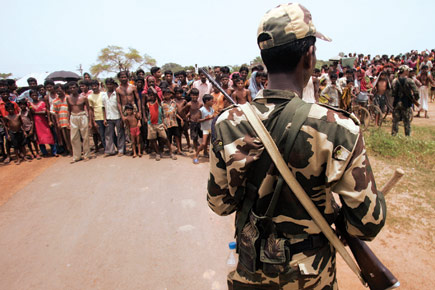 
A couple of years ago, I found myself having lunch next to a quiet, inconspicuous man at the end of a two-day seminar at a business school. We got talking. I had noticed him the day before, but among all the participants in the discussions, he had been the least vocal. So when I found him next to me at the dining table, I asked him about his work. It turned out, quite simply, that he had the most dangerous job in India. He was the man in charge of the anti-Naxal operations in one of the country’s worst insurgency-affected states. There was a war on between Maoists and government forces, and he was the commanding officer on the State’s side.

Naxal insurgents had tried to kill him a dozen times, and miraculously, he had always escaped unhurt. “I don’t worry about the attacks,” he shrugged. “But twice, when they attacked my car, my wife was with me. My father was also an IPS officer, as was my uncle. But my wife is from a non-police family background, so she gets hassled with these incidents. So both times, when they started firing, I shoved her head down on my lap, so she couldn’t see what was going on, and placed my elbow on her back to better balance my Kalashnikov.” He paused for a bit, then said: “What I worry about is my children, because now they have started targeting family members of policemen. So if my kids are late by even five minutes from school, alarm bells start ringing.”

How do they hire, these Maoists, I asked him. He smiled grimly. “The poverty is so bad that the people think it’s better to die in a fight than starve to death, see their families starve to death. All that Naxals have to do is ask villagers two questions: ‘Your child died of diarrhoea last year. Do you think anyone in the Gandhi family has ever had diarrhoea?’ And ‘Your brother is crippled by polio. Do you think anyone in Manmohan Singh’s family can ever have polio?’ That’s it. They get food, they get a 303 rifle, they get a sense of empowerment for the first time in their lives. Every day in their lives they have known only fear and hopelessness. For instance, a corrupt constable would come to a tribal’s home and say, ‘Give me that goat of yours, or I’ll put you in jail on a theft charge.’ The tribal has no option but to give up his goat. But the goat is a massive loss for him, it could mean starvation. Then the Maoist comes to him, and gives him a 303. Immediately, he is equal to that cop. Our society and delivery systems have pushed him to the brink, he has nothing anymore to lose. Might as well retaliate.”

He chewed silently for some time. Then, “We, from the police’s side, try to do the most we can, distribute saris, food at remote villages, educate them, try to see that NREGA reaches them,” he said, “Because that’s the only way it’ll work, not through this endless low-intensity warfare. But there are so many leakages in the system…”

“We have seen the videos they make in their training camps. Three activities they do every day. Physical exercise, and their exercise regime is better and tougher than what the Indian Army does, forget about Indian policemen. Many of them are healthier than our men. The second daily thing they do is practice marksmanship. The third: a leader sits with them in the evening and indoctrinates them, makes sure they are not wavering in their resolve. It’s a very strong system.”

But how will this end? He smiled. “Not in the foreseeable future,” he said. “Of course, that’s my opinion. Unless we can get rid of this abject poverty, it won’t go the Government’s way.” What do you mean, I asked. Are we going to lose the war against Maoists? By this time, we had finished dessert and were walking out of the dining hall. His car was waiting to take him to the airport. “Yes,” he said. I never saw him again.