Slacker Comedy at its Best

How Sulemani Keeda takes a wonderfully angular look at Bollywood 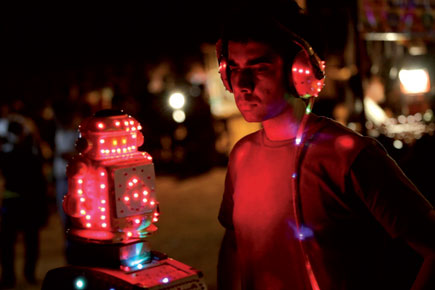 How Sulemani Keeda takes a wonderfully angular look at Bollywood

The central paradox of filmmaking in Mumbai is that the audience, more often than not, punishes the producer for making a ‘good’ film. What’s worse, nobody knows which ‘bad’ film will work! The beauty of an idea on the other hand is that everybody can have one. You don’t need professional writers for it. Unlike most film industries in the world, cinema in India is rarely, if ever, funded by state sops or scholarship grants. It works on the basic algebra of revenues—from theatres, television broadcast and DVD rights—minus costs equalling profits.

A constant tussle then between the ‘creative guy’ (who perhaps has a great story to tell) and the ‘money bag’ (who has no money to lose on someone else’s dream) is natural. Both of them have very separate ideas of what a film should be. This produces the most Bollywood humour offscreen. You only have to hang out with ‘filmies’ in Versova and its vicinity to realise that the conversation inevitably centres on this ‘crazy meeting’ with a producer/financier/ casting agent/son of an actor. After a while, it stops sounding funny. The world is what it is. Show-world is no different. Sulemani Keeda (releasing 5 December) in that sense is a strikingly witty and a phenomenally funny film on the periphery of Mumbai’s entertainment district, where nearly everyone, I guess, is from Delhi! At any rate, most are from outside Mumbai, from middle-class homes, living alone or in shared apartments, paying massive rents for seriously small rooms. Their location indicates whether they’ve found some luck yet. They could be graded further by the coffee shops they frequent—Versova, Oshiwara or JW Marriott; bars they go to—Shankari or WTF in Andheri. Writer, musician types can be found at open mic nights in Bandra. The house ‘after-party’ scene is more democratic. Everybody’s welcome so long as you bring your own booze. It’s a city where love is easy to find. The night is usually young. So are its inhabitants.

The two screenwriters in Sulemani Keeda lead similar lives. It takes a certain kind of keeda to also churn out scripts, not knowing whether any of them will become films. They go door- to-door attempting to land a suitable producer. The script for them is a bit like washing powder ‘Chamko’. I say this because the film also fondly reminds me of Sai Paranjpye’s Chashme Buddoor (1981), which was about happy-go-lucky, unemployed blokes ‘struggling’ on the campus of Delhi University. Struggling to make it in cinema, I suppose, may not be too different, except the exams to pass aren’t standardised and some of them are patently ludicrous. They make for better stories still. Those who’ve tried their luck usually have a book or script waiting to be written—on their own life in Mumbai and the oddballs they met. God knows, scores of films with varying budgets have been made on the Mumbai film industry. Almost all of them have been spoofs of what’s already a spoof. Few bothered to watch those films. A common perception in Bollywood is that movies on the movie industry don’t work. I suspect this has something to do with our associating movies with magic. Nobody wants to see what’s really inside that hat. It kills the fun.

Sulemani Keeda is what you might call a ‘Versova indie’ (as oxymoronic as that term sounds). It is a super low budget film. Producers have put their own money in it. The debutant director, Amit Masurkar, has spent enough time in Mumbai and movies to know what he’s filming. The lead actors are Naveen Kasturia (a popular face in TV commercials), Aditi Vasudev (who’s grown into a fine talent since her debut in Do Dooni Chaar), and Mayank Tewari (who’s a screenwriter himself). The film is partly a ‘mockumentary’, although it also aspires to be ‘mumble-core’—a genre of flicks shot outdoors with secret cameras where only the leads are actors; reaction shots of the public are real (MTV in the US makes some fine mumble-cores; otherwise, think Sacha Baron Cohen). But more than anything else, Sulemani Keeda is a ‘slacker comedy’ about two slackers, rather than artistes, who take themselves too seriously. Naseeruddin Shah once told me if there was a genuine film made on the life of people in the film industry, the powers-that-be wouldn’t let it see the light of day. If they did, nobody would believe those stories. That’s probably an insider’s account. An outsider’s take, like Sulemani Keeda, requires only putting a camera before two strugglers and everything just becomes so naturally funny!