A month in Japan, where the bathroom experience is beyond superlative, makes one wonder how Japan and India could have diverged in such a dramatic fashion when it comes to potty culture 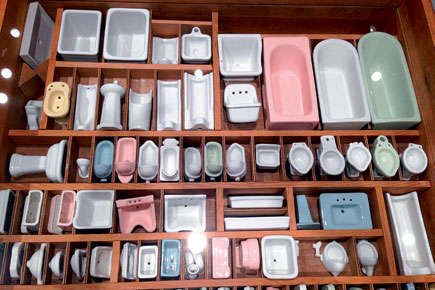 When you live in India you get used to dealing with a certain amount of shit. Metaphorical shit and literal shit. With 640 million people defecating in the open (that’s one in every two Indians, for people like myself who have trouble imagining large, abstract numbers), the proverbial shit hasn’t just hit the fan, it’s blasted it away. And it’s not just that we’re mired in crap, we’re obsessed with it. Discussions about bowels (not to be confused with the oft-mispronounced bowls, or the music of Bauls) abound in polite and impolite society. Feeling a little peaky? You may be questioned in poker-faced manner about whether you’ve passed a motion or stools that day, and further, be quizzed on textural details. Losing your temper too quickly? Here, use dadi ma’s cure for constipation. This, from a society that has frequent cause to blush about women wearing leggings and books that dare to depict our ancestors as sexy creatures. But shit! Going to the bathroom! We can talk about that till the cows come home.

Having just returned from a month in Japan, where the bathroom experience is beyond superlative, I wonder how Japan and India, two Asian countries with distinct traditions of purity and personal hygiene, prudery and social hierarchy, could have diverged in such a dramatic fashion when it comes to potty culture. After all, we both started with the basic idea of a hole in the ground (incidentally, still widely used in Japan, although maintained with meticulous levels of cleanliness). The Japanese however, haven’t been content to stick with the squat and go approach. In fact, if we were to compare the evolution of toilets to the evolution of humans, I’d say that the rest of the world’s toilette falls somewhere between Neanderthal and Cro-Magnon, while Japan has created a whole new species—the Toto.

For those of you who think of that pleasantly catchy but infernal song Africa, when you hear the word ‘Toto’, forget about it. Think instead of a magical armchair that does everything short of flying. This throne speaks to you, raises its hood like a cobra without your having to lift a finger, heats the rim of its seat so your undercarriage merely has to succumb to its ring of warmth. For women familiar with the strains of the hovering technique, you no longer need to feel like a pesticide machine spraying a field. Sit, relax, enjoy. Toto plays waterfall music to mask the sound of your tinkles, it sprays and jets and dries your nether regions. And finalement: it deodorises with electrolysed flush water, so you can return again and again for the same 5-star experience.

When I informed my friend Yumi that I wanted to visit the newly opened Toto museum on the outskirts of her hometown Fukuoka, there was a noticeable shiver in her face. She had planned for the Natural History Museum, a trip to the castle, the beach. At worst, she had betted on a shopping expedition to Muji and Uniqlo, But Toto? “Never would I have expected you to choose this,” she admitted, looking a little sad. Her face relaxed somewhat when I reassured her that she would not have to accompany me on my Toto pilgrimage.

The Toto Museum rises from the suburbs of Kitakyushu like a giant white Dadaist wedding cake. Duchamp would have been envious. Inside it is spotless and gleaming and busy. Clearly I wasn’t the only one who woke up thinking, “Hmm, what to do today? Toilet museum, I think!”

To be fair, the Toto museum isn’t just a toilet museum. It features all the umbrella aspects of the company, but solar chimneys and Noritake don’t have quite the same pizzazz as a Toto toilet bike. This thing belies the imagination. A roadster motorbike mounted with a toilet for a seat, and a giant toilet roll to bolster the back. An explanatory video that runs alongside this installation demonstrates how the bike can run on human ordure if need be, and even has someone riding the bike around town sporting a smart white helmet with a neat little swirl atop.

A woman standing at the toilet bike beside me pointed to the swirl on the helmet and then to the toilet, just in case I was confusing the swirl with a softy ice-cream. “Oh, I know what that is,” I said, “Don’t you worry!” And immediately, she shifted her delicate fingers over her mouth and guffawed too. This off-colour joking with a gaijin stranger struck me as strikingly un-Japanese behaviour, but after poking around in the library section of the museum and discovering an entire range of children’s books that extol the ‘poo poo’, I thought, maybe not. Maybe the Japanese are equally obsessed with their bowels. After all, Jun’ichiro Tanizaki devotes four whole pages to the toilet in his seminal book on Japanese aesthetics, In Praise of Shadows. He credits centuries of haiku poetry to this space of perfection and spiritual repose, where one might ‘listen to the chirping of insects or the song of the birds.’ He was talking about a traditional Japanese toilet, not a Toto, but still.

I left the museum buoyant from the experience but weary for the future. ‘Where the hell are India’s Morimuri brothers?’ is what I was thinking. In 1917, even before sewer systems existed in Japan, these brothers had begun manufacturing flush toilets and thinking about how lavatories could influence public health and cultural lifestyles. Incidentally, only a year before they founded their company, Rabindranath Tagore had visited Japan and in his prescient manner predicted how India would do well to look to Japan’s “vital nature” to find ways to balance tradition and modernity and bloom gracefully from the lotus mud. In his essay, Nationalism in Japan, he uses several botanical similes to drive home his point. How we in Asia must learn to ‘put forth new leaves and flowers’, and ‘infuse the sap of a fuller humanity into the heart of modern civilisation’. But most importantly, how we must not look to imitate the West (Europe), which is overrunning the world like a prolific weed with its political civilisation based upon exclusiveness, threatening to choke us with toxins in the undergrowth. What’s particularly marvellous about Tagore’s essay is that the word ‘civilisation’ pops up more frequently than the word ‘nationalism’, and it is this idea that I want to zero in on.

One of the few topics I remember from my history lessons at school concern the ingenious people of the Indus Valley Civilization. I remember learning how they devised the construction of crossroads so that winds would keep the streets clean. How they developed the world’s first sanitation systems and flush toilets—rooms in their houses were set aside for bathing and floors were sloped so that waste water could flow into covered drains on the streets outside. Given the ridiculous headstart we had (the rest of the world’s inhabitants during the Bronze Age were presumably lolloping off to a corner in the cave to do their business), it’s startling that we’ve barely progressed in 5,000 years. Of course, we have Prime Minister Modi and his Swachh Bharat campaign, which aims to make India free of open defecation by 2019, but reports have highlighted several roadblocks already. Despite 8.9 million toilets being built in rural areas last year, many remain unused—‘ghost toilets,’ because of a variety of caste and cultural complexes. People just prefer going outside—the perambulation to their poop stop beside the lake or the train tracks helps them get their bowels ready for action, and this way, no one has to worry about who’s going to clean out that latrine pit.

Later, at dinner with Yumi and her family, I had a meltdown. I lamented how India and Japan had chosen such diametrically opposite paths. Nowhere close to the bhai-bhai relationship Tagore had hoped for. I praised the precision of the Shinkansen and the marvel of rush hour at Tokyo Station, where clouds of beautifully dressed people move in a contained fashion towards their destinations. How stress-free it is to travel in a place like this, I went on. At every subway station, there’s a bilingual man who pops out and helps you with any directional confusion. It’s just so civilised. The infrastructure works!

Yumi, who has lived in India for four years, countered with, “But it’s so boring, no? We are all like pressure cookers in Japan. Ready to burst!” She proceeded to extol the virtues of India—all stuff I’ve heard before from friends and family who have abandoned India and speak nostalgically from under their wisteria pergolas about the “aliveness” of India. Yes, yes, I admit. It’s a valid point. No mistaking it. No possibility at all for a mechanised or robotic life in India. Each day throws up unexpected miracles and tragedies. No chance of boredom here!

Japan’s long history of isolation and its cultural proclivity for honne-tatemae—one’s genuine feelings versus what one can say publicly, has led to an undeniably rigid society where everything works fine, until it doesn’t. “One day someone doesn’t show up to work and you find out that they killed themselves,” a Tokyo executive explained to me. Last year, an average of 70 people killed themselves a day in Japan. The novelist Banana Yoshimoto, when I asked her about the problem of suicide, said the feeling of loss that people experience in Japan is so strong that if she were a young person she might have already killed herself! So, okay, the state of civilisation in the Land of the Rising Sun isn’t all hunky dory despite having the world’s best toilets.

When I fly home, I’m in a funk. No more Toto. No more bento box. No bilingual man popping out of anywhere to get you where you need to be. After a few days, when any vestiges of travel sheen have been properly scoured away by the boisterousness of Chennai’s day-to-day—the elbowing and phlegm-clearing and horns, I walk around the neighbourhood and concede, yes, yes, despite all this, life here is bursting and manifold. Behold are the ‘varied physiognomy of branches’ that Tagore was talking about. I only wish we could continue being so alive without the smell of shit in our nostrils.