Return of the Diva

Return of the Diva • The Big Wedding • Last Chance Fuss 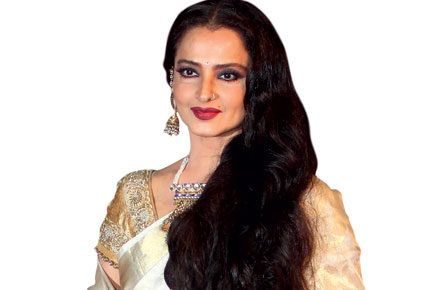 Return of the Diva • The Big Wedding • Last Chance Fuss


Bollywood’s very own Greta Garbo, the reclusive Rekha is likely to appear on screen shortly in an adaptation of the popular Gujarati play Baa Ae Mari Boundary. The film will be produced by Indra Kumar, who has reportedly convinced the Khoon Bhari Maang star to come out of retirement to play a neglected oldie who becomes a supermodel and overnight celebrity when her US-returned grandson insists on shooting her pictures and persuades her to model for commercials.

Rekha, who has always had a thing for ugly-duck-turned-beautiful-swan stories, is believed to have said ‘yes’ to the project within minutes of being offered the part. You’d have thought the fact that Vivek Oberoi has been cast as her grandson in the film—and hence most of her scenes are with him—might have thrown a spanner in the works, but no, Madame Re is still on board.

Meanwhile there’s no official word yet on whether she will appear in Krrish 3, after showing up first in Koi Mil Gaya as Hrithik Roshan’s mum, and then in Krrish as Hrithik’s grandmum. If they do introduce a third-generation version of Hrithik in Krrish 3, it’s unlikely she’ll want to play his great-grandmum this time!

Kareena Kapoor hasn’t made any public appearances since the Heroine fiasco recently, but according to sources close to the actress, she’s moved on and is focused solely on her wedding next week. It turns out that Kareena and Saif have succumbed to their parents’ pressure and have consented to a big fancy shindig despite initially insisting on a small affair.

Now the festivities are expected to unfold over three days in Mumbai, starting from 14 October, and will culminate in a reception that Saif’s mum, Sharmila Tagore, is hosting for family and close friends in the capital on the 18th. None other than the groom’s ex-wife Amrita Singh reportedly sniggered to friends that the couple’s close friend and favourite filmmaker Karan Johar has been roped in to emcee the sangeet ceremony. Meanwhile it is learnt that Kareena’s friend and trusted designer Manish Malhotra is putting together her trousseau, while photographer Avinash Gowariker has been asked to shoot the family portraits.

A source reveals that Saif himself has begged off any involvement, leaving the women to make all the important decisions. He’s reportedly put his talent managers of many years, the guys at Carving Dreams, in charge of organising and managing each of the ceremonies. The team is apparently working closely (and patiently) with Kareena, her mother Babita, and her mum-in-law-to-be Sharmila on all the little details. Given all the egos that are most likely flying about that room, it’s a good thing the actor’s got his trusted band of associates involved, who won’t go running the moment one of those ladies throws a temper tantrum.

Returning behind the camera after two consecutive duds, this A-list filmmaker has embarked on an ambitious passion project that he recently began filming with two young, promising stars in the lead. Industrywalas are saying this could well be his make-or-break film, given that it’s unlikely any studio would be willing to fund him if he delivers a third expensive turkey.

Yet, word from the set is that the filmmaker hasn’t changed his indulgent ways. He still shoots way too many takes of every scene, managing to can barely a few scenes per day. What’s more, he’s still reportedly terrorising his direction team, who look like ‘frightened puppies’ around him, as one cast member observes. A rival director claims key technicians on that project have complained to him that they’re already sick of the filmmaker’s ‘school principal-like behaviour’ and are contemplating a mass walkout from the project.