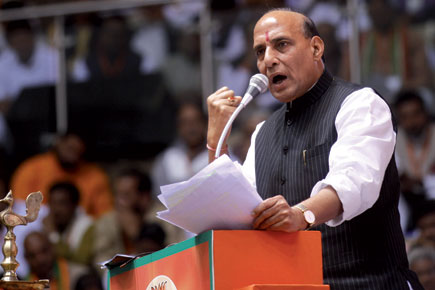 
‘India First’ announced Narendra Modi, and those looking for excuses to support him fell in line, hailing this nationalistic definition of secularism. The only question worth asking in this context—what kind of India we would want to put first—went unanswered. A pity, because an answer would go some way in explaining why, despite this corrupt and largely dysfunctional Congress Government, a Modi-led or even a BJP-led alliance is not a palatable alternative.

The BJP’s tenure in power from 1999 to 2004, even if we set aside the violence in Gujarat, was a clear indication of the dangers of the party’s ideology. Murli Manohar Joshi, as Minister for Human Resources Development, worked to make astrology a part of India’s university curriculum; ‘Vedic mathematics’, a grab bag of schoolboy tricks invented in the 1960s with no provenance in the Vedas, was encouraged, and the healing powers of cow urine were promoted.

This remarkably blinkered and narrow-minded vision still has implications for almost every aspect of Indian intellectual and social life. While the possible return of the BJP will have much to do with the failure of the current Congress-led alliance, the real danger is that the party will see this as an endorsement of its Hindutva worldview.

If evidence were needed that the party continues to espouse this vision, it was available at the recent meeting of the party’s National Council. Like Murli Manohar Joshi, BJP President Rajnath Singh too was at some point of time employed at a college to teach Physics and seems to deal in the same absurdities. Not many commentators seem to have paid heed to Rajnath Singh’s speech, which still occupies pride of place on the BJP website, but his vision of how India could lead the world this century is worth a relook. Considering that he was Agriculture Minister in the Vajpayee Government and will be a powerful figure in any BJP-led formation at the Centre, it also makes for worrying if hilarious reading.

“India also has capabilities to do something like this. Friends, I have been a student of Physics, so I want to draw your attention towards the experiment taking place in Fundamental Physics. We all know that from the mobile to internet and TV, all function on the basis of digital signals. It was possible to make digital signals when Quantum Mechanics was discovered a hundred years back. The principle through which Quantum Mechanics was found was the ‘Uncertainty Principle’ propounded by Werner Heisenberg. If Heisenberg had not propounded the Uncertainty Principle, then Quantum Mechanics would not have come. And Digital Signals and communication of this age could not have come to this stage.”

“Heisenberg learnt the Uncertainty Principle from the philosophy of Vedas of this country. Heisenberg came to India in 1929 and met Rabindranath Tagore.”

In three succinct paragraphs, Rajnath had established the Vedic foundations of Quantum Mechanics. He then went on to cite evidence for this claim, turning to Fritjof Capra, author of The Tao of Physics, for support, “In this meeting, he discussed with Tagore different topics related to Vedic philosophy and theoretical physics. Assistant of Heisenberg and Austrian scientist Fritjof Capra has himself written in his book Uncommon Wisdom on pages No 42-43: ‘In 1929 Heisenberg spent some time in India as the guest of celebrated Indian poet Rabindranath Tagore, with whom he had long conversations about science and Indian philosophy. This introduction of Indian science brought Heisenberg great vision, he told me. He began to see that the recognition of relativity, interconnectedness, and impermanence as fundamental aspects of physical reality, which had been so difficult for himself and his fellow physicists, was the very basis of Indian spiritual traditions. ‘After these conversations with Tagore,’ he said, ‘some of the ideas that had seemed so crazy suddenly made more sense. That was a great help for me’.’”

This does not add up to evidence, but would certainly have been of some interest in the context if Heisenberg had not already postulated the Uncertainty Principle in 1927, two years before that meeting with Tagore. Questions of causality have an important role in Quantum Mechanics, but even they cannot justify effect preceding cause by two years in the macroscopic world. Whether Rajnath Singh likes it or not, Quantum Mechanics would have been no different with or without Heisenberg’s conversations with Tagore, with or without the existence of the Vedas.

The BJP leader was by no means done at this point. “And last year in July in the CERN laboratory of Europe, the God particle was discovered, the scientific name of which is Higgs Boson. It has been considered to be the biggest scientific discovery of the 21st century. And it is being said that this discovery may bring the biggest change in human life in the 21st century. The basis of the discovery of this particle had been established 70-80 years back by taking inspiration from a similar principle by the great scientist of India Satyendra Nath Bose. The word ‘Boson’ in the name of this particle is taken from the name of Satyendra Nath Bose. It is said about SN Bose that he always used to be in a state of meditation and used to solve scientific problems with alacrity. Famous scientist Neil Bohr had also accepted this capacity of Bose.”

Rajnath Singh’s meditations, for what they are worth, do not change the fact that Bose’s work describes the properties of the entire class of bosons, but it was the work of Higgs and other physicists that predicted the existence of a particular kind of boson to explain the presence of mass in elementary particles. The CERN discovery is far more about the work of physicists like Higgs than Bose.

On the basis of these illusory insights and a complete lack of understanding of Physics (pity the students he must have taught), Rajnath concludes, “It means that we had the basic principle of today’s digital revolution and we have the basic principles of future revolution. The lacunae lies with out (sic) policies that we never paid attention to ‘Research of Fundamental Science’ and we fear to even think, due to a colonial mindset, that in these fundamental researches, the basis is our traditional knowledge.”

“We can make new Swadeshi technology by research in Fundamental Science. We can become self-reliant in the field of defence by making weapons through this technology.”

On the evidence of this speech, the country seems set to be in safe hands.