Pursuit of Democracy by Dare

Expect the CPM to flex its strong arm with impunity in the run-up to the Assembly polls in West Bengal, and political thuggery at its crassest 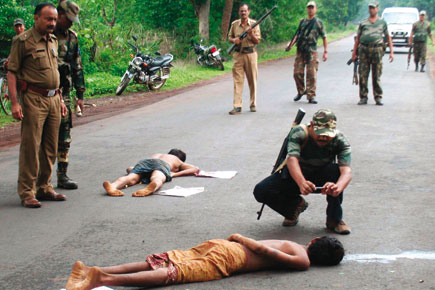 Expect the CPM to flex its strong arm with impunity in the run-up to the Assembly polls in West Bengal, and political thuggery at its crassest


Expect more death and destruction in Lalgarh. The eight villagers killed and nearly two dozen injured in the 7 January firing, allegedly by elements of the Harmad Bahini —government-backed militia in the area’s Netai village, part of the desperately poor region of what is called Jangalmahal in the western bulge of West Bengal—is a curtain-raiser to 2011.

Assembly elections are due this summer. It’s a time for turf wars: for the CPM-led Left Front government to prove its grassroots, strong-arm domination on the one hand, and Mamata Banerjee’s All India Trinamool Congress on the other. Maoist rebels and their journeymen—relatively recent provocateurs and allies of convenience for those who would have them—will provide sideshows.

Thuggery in politics is not new to West Bengal. The Congress government in the early- and mid-1970s finetuned this application during the chief ministership of Siddhartha Shankar Ray. Since 1977, it has been the preserve of the CPM, helmed for long by Jyoti Basu and now Buddhadeb Bhattacharjee and his colleagues. Force, intimidation and extra-judicial authority have played significant roles in spreading cadre strength and maintaining control over the dynamics of the village, municipality and state. Trinamool, the usurper-in-queue, plays to a similarly aggressive tune.

Lalgarh would have stayed out of reach of the national narrative, were it not for Maoist rebels. After making inroads with the help of cadres from the neighbouring areas of Jharkhand, on 2 November 2008, they triggered a landmine to snag a motorcade carrying, among others, West Bengal Chief Minister Bhattacharjee and Union steel minister Ram Vilas Paswan. They were on their way back from attending the foundation stone-laying ceremony of JSW Bengal Steel’s proposed plant at nearby Salboni. The spot was 7 km north of the district headquarter town of Medinipur—Kharagpur is a touch to the south. Kolkata is two-and-a-half hours by expressway, close enough for 24/7 television to be able to broadcast a new reality show.

Bhattacharjee and his guests survived, but Maoists had made their point. State response was swift and brutal. Police, local CPM leaders and goon squads—similar to those used in Singur and Nandigram to help acquire land for Tata Motors and Indonesia’s Salim Group—started rooting out Maoist sympathisers in a free-for-all collateral damage operation of arrest, molestation, killing of tribal and ‘scheduled caste’ villagers and destruction of homes and property. Resistance came in the shape of the People’s Committee against Police Atrocities, which worked with Maoists. By mid-2009, this bloc, riding on the outrage of villagers, killed, threatened and ousted CPM leadership and cadres, and enforced a blockade.

I was in Lalgarh on 18 June that year when a combined force of paramilitary, police and state-backed militia began a counter-attack. This reclamation again spilled over to affect innocents, as many villagers were arrested, questioned, threatened and tortured. Some disappeared. The region’s Maoists have since steadily lost ground. And the PCPA, which worked to build tracks, ponds and minor irrigation channels, and maintain health centres, is hard-pressed to recover since its rogue elements were accused of causing the Jnaneshwari Express disaster in 2010.

I returned last year and spent some days in forests southeast of Lalgarh. Villagers continue to live in fear, pushed by the fear of rebels as well as the rampant police, paramilitary and militia—the Netai incident was provoked when villagers declined to offer up recruits to Harmad Bahini. I moved from mud hut to mud hut and village to village because residents were afraid to invite trouble for harbouring a writer and also because no household could afford to more than once feed me a plate of boiled rice and some dal. Villagers gather sal leaf from the forest to weave into plates. A thousand plates fetch Rs 70-80. Such is the existence.

The brutality of the CPM is beyond doubt, etched for over three decades. On the defensive after losing several local elections, its strong-arm can only get stronger in the run-up to Assembly elections. The concern is: were Trinamool to win the elections, it will likely be as brutal in maintaining its hold. And the Lalgarhs of Bengal will remain leitmotifs in this state’s consistent pursuit of democracy by dare.