‘Satanic Verses’ was banned 20 years ago. In all the navel-gazing contemporary Indian fiction, where’s the book that has the power to offend? 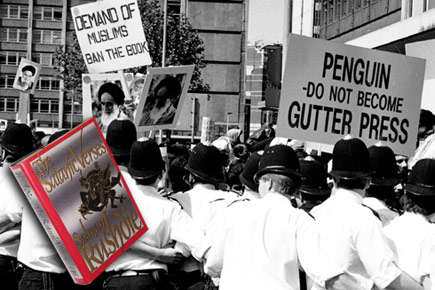 ‘Satanic Verses’ was banned 20 years ago. In all the navel-gazing contemporary Indian fiction, where’s the book that has the power to offend?


‘Satanic Verses’ was banned 20 years ago. In all the navel-gazing contemporary Indian fiction, where’s the book that has the power to offend?

Twenty years ago, give or take a month, The Satanic Verses was banned in India. Over the course of this month, there will be no dearth of writing on the ban of books, but on this anniversary, the real tragedy is not that book bans are still alive in the country but that there is a diminishment of the kind of literary ambition the book represents. Today you would be hard put to find Indian fiction in English that anybody would want banned.

Take a look at this year’s shortlist for the Shakti Bhatt Prize:

» Mridula Koshy: If It Is Sweet

» Parismita Singh: Hotel at the End of the World

Baulsphere is non-fiction. The others, well, the titles speak for themselves. If you want to convince yourself, go glance at the blurbs in a bookstore or on the Web; I did, and there is not a book of fiction on the list I want to read. Individually some may be well written, taken together the list only illustrates the point I made, unless of course there are dwarves or eunuchs out there who are offended.

A friend while strongly recommending Chandrahas’ book told me he was glad that Indian authors were no longer trying to write the great Indian novel. Precisely the point: when is the last time anyone tried? In the past two decades, liberalisation has changed the country, we have witnessed the rise and perhaps the fall of the BJP and the BSP, but the literature of this generation of writers is mostly about a few people staring at their navels.

The only authors to have recently tackled ambitious subjects are not the ones who should be left alone to do so. Consider two: Arvind Adiga’s White Tiger and Indra Sinha’s Animal’s People. One takes on liberalisation, the other the Bhopal gas tragedy. Both bear the stamp of other lands, which explains Adiga’s failure to get either his driver or his Bihar right. Indra Sinha has learnt his Bhopal only through one of the two main activists working for the victims. As someone who has reported out of Bhopal for two years, I know that the person excised out of Indra Sinha’s book is the one who has done much of the work on the ground, and it may be worth pointing out that he is a Muslim who is not fluent in English. Fiction creates its own world, but when it distorts we need contrary versions to contest the truth and we just don’t seem to be producing any of our own.

In part our books are limited in scope and ambition because this is all our circumstances allow. No recent Indian author has managed to live out an extravagance of ambitions, and the domestic publishing industry must share the blame for this. Publishers earn enough to support the cost of large establishments and a set of largely incompetent editors, but when it comes to writers in India, they seem to not have money. A writer of fiction works a day job and labours to finish the little he can because that is all the publisher will pay for.

But that is only part of the answer. Books written within such limits need not be limited—Kafka also had a day job. Two years ago, justifying the choice made by his generation, Sarnath Banerjee had said: “We want to rediscover our own voices, which means telling the stories of our own lives. Definitely not tales of three generations of cinnamon and papaya in little gardens in Tamil Nadu. One example: over the past year, a woman friend of mine has had sexual relations with 16 people. And she can no longer recall which of them was the first.’’ Unless I am one of those 16 people, I think I prefer the papaya. We are stuck with these people wanting to tell the story of their own lives. Unfortunately they all seem to have lived out the same life.

The problem then is not with individual authors or individual books, but with what constitutes the world of recent English fiction. A small circle of people acquainted with each other make up the circuit of writers, reviewers and editors. This world is largely a product of Bengalis and Malayalis living in south Delhi or south Mumbai writing for each other. Maybe not quite, you can throw in a few people in Bangalore and Chennai, but there is no escaping the monotony and effeteness of much that is finally published.

Which is why the few books that shock and surprise come from outside this world. The most prominent example from the recent past is Basharat Peer’s Curfewed Night. It is a book of non-fiction, written out of the personal experience of growing up in Kashmir. No publisher funded the work. Peer, a journalist, took time off and spent his own money on writing the book. My bet is that when we do come across a book of fiction that has the same capacity to astonish, it will have been written by someone from a similar background, someone who has acquired the language but not the circumstances that go with it in Delhi or Mumbai. Even as a failed attempt such a book would count for far more than another quiet, well-written book that adds up to nothing.