It’s not an insult. It’s something actively being studied by scientists and engineers. 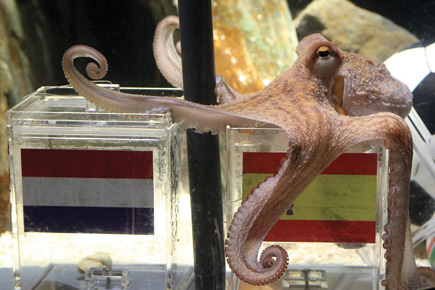 It’s not an insult. It’s something actively being studied by scientists and engineers.


The World Cup soccer finals usually throw up new stars, men who seize the day and make their way from the sidelights to centrestage. The only new star this World Cup has lit up on our horizon, though, is not a human being at all; it is Paul, the psychic octopus, residing in a German zoo, which has uncannily predicted the results of every match Germany has played, and finally, the Cup winner. An unblemished record.

The method has been simple. Officials placed a mussel inside each of two clear plastic boxes bearing the national flags of the competing teams. And Paul has been picking up treats from the box he supposes contains winners, while ignoring the losers. The odds of all his forecasts coming true were 3,000: 1 by the calculation of bookmakers William Hill.

Paul’s influence on this World Cup has been huge. The day before the final, fans of the Netherlands team at Thiruvananthapuram, Kerala, staged a protest against Paul for predicting the defeat of their favourite team.

The octopus is considered the most intelligent creature among all invertebrates. So much so that it is considered an honorary vertebrate in the UK, under the Animals (Scientific Procedures) Act, 1986, and other cruelty-to-animals legislation, extending to it protections that invertebrates are not normally accorded. A typical octopus brain has half a billion neurons, massed into complex lobes, like human brains. In comparison with their body weight, they have the biggest brains of all invertebrates. In the 1950s, Oxford biologist NS Sutherland proved that octopuses could learn how to learn. It has also been proven that they have excellent short- and long-term memories, and even play when provided toys. They can open containers with screw caps (check YouTube) and can distinguish between different shapes and patterns. Last year, scientists discovered to their surprise that octopuses can use tools like coconut shells to make a lair for themselves. They can also learn to negotiate their way through mazes.

Octopus eyes are so advanced that manufacturers have used them as a model to improve the camera lens. By copying the structure of an octopus eye, which has thin layers of multiple densities to bend and focus light, they were able to create a lens that can now produce a clear picture.

Recent research suggests that octopus’ arms may have minds of their own. Each arm has its own independent nervous system, so the brain may simply delegate orders, while the arm is responsible for deciding exactly how to execute them. So computer programmers are interested in the decentralised processing that occurs between the octopus’ arms and brain. The fact that a core control centre is not necessary to run a complex network could lead to new developments in technology.

Robotics engineers believe the octopus arm provides a good template for creating a strong but flexible robotic arm. Such an arm would be useful in delicate surgeries or in unpredictable search and rescue situations.

So don’t laugh at Paul. He may not pass your average IQ test, but that is only because his life is different from ours, so his consciousness and intelligence are necessarily distinct from ours. But, as he has demonstrated, when it comes to a keen analysis of the most popular game on earth, he is no pushover.  He knows, he understands, and he chooses the correct box to lay his bets on. He is a treasure.