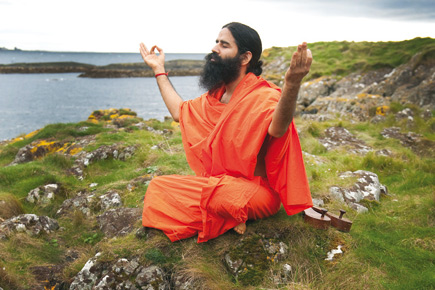 
As it turns out, Baba Ramdev is inflexible after all. At the time of going to press, the man who can touch his own toes, the evangelist of what he claims is yoga and a spurious healer of all maladies, has rejected the plea of the Prime Minister and a few ministers to abandon his fast-unto-death to demand the deportation of Indian black money from other countries. And it appears that he would go ahead with the charade on June 4 from which he would, of course, emerge alive citing a promise made by the government. With this the anti-corruption movement loses its halo.

Ramdev has strange views about the world around him. In a television interview with Prabhu Chawla he said that since there was so much corruption in the country it must, “ban Rs 50 and Rs 100 notes.” He said most Indians cannot afford to purchase anything that costs more than Rs 20 anyway. Then he looked at Prabhu Chawla and started singing, “Prabhuji have mercy on us, give us your love”, interrupting his song to indicate with a finger pointed to the ceiling that by ‘Prabhuji’ he was referring to god and not the interviewer. After ten Pakistani terrorists attacked Mumbai, Ramdev appeared on a channel and said, "They think we are vegetarians… But we should show them that we can hit back… In times like this do pranayam (and he shut his nose).”

That such a man now represents the anti-corruption movement is the worst thing that could happen to the movement and lays bare the fact that television revolutions that excite the politically impotent middleclass, which was what the Hazare farce was all about, are exaggerated momentary triumphs. The government may be scared of Ramdev and of what the media would do with his revolution, but the nervousness of elected leaders does not necessarily always mean a victory for the people.

It is interesting to note that the middleclass hysteria that followed Hazare’s fast did not affect states like Kerala and Bengal much. The degree of involvement with the apparent revolt was significantly less. That is because the educated population in those states is very much a part of the mainstream political process. They vote, they attend political rallies. So they had no need for Hazare’s fast. They know that in a democracy, the most intelligent and meaningful mass movement remains elections, no matter what Chetan Bhagat and Kabir Bedi may have to say. But outside those states, in the metros, the middleclass behaved like amateur citizens – they got excited by the idea that they can circumvent the political process to reform the nation. As the self-destruction of the nascent anti-corruption movement shows, it was a naïve notion.

That is why an elected representative, despite all his flaws, has a greater legitimacy than a well-meaning reformer. Who does Ramdev represent, who does Hazare represent, who does Prashant Bhushan represent? Who gave the right to a group of individuals, one of whom has a crush on Narendra Modi and Raj Thackeray, another whose cure for obesity is ‘breathe in breathe out’, and another who accepted an expensive gift from Mayawati, to coerce the elected government into creating an autocratic institution called the Jan Lokpal?

On the other hand, within the means available to a democracy, without the provisions of the Jan Lokpal, didn’t the country manage to send a former cabinet minister, two MPs, and a few powerful corporate executives to Tihar jail? An imperfect democracy may function in imperfect ways but it still works. That is because politicians have a stake in remaining politicians. They may not be good human beings always but to maintain their careers in which they have invested their whole lives they will do what they can to do the right things.

That is at the heart of all professions – the stake of a professional in his career.