News of a Rape and the Story of a Nun

A hymn to Christian educators 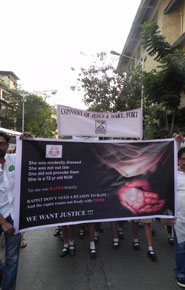 Last week, a septuagenarian Sister Superior, whom I shall call Sister Claudia, was raped at a convent school in Ranaghat, West Bengal. It made sense to apply myself to this incident because she was my high school principal from the early to the mid-1980s (Std. I-6) at the Convent of Jesus and Mary (Fort) in erstwhile Bombay.

Memories battled to focus my attention. I remembered her white habit and wimple, the silver cross dangling from a chain around her neck, her wide forehead and soft chin, and even her acid tongue. She was a disciplinarian to boot. But I also recall hanging upside down from the jungle gym bar and noticing Sister Claudia watching us from the school verandah, a grim look of concern pinching her face. I wish it had been something other than an assault on her that had resurrected these moments.

Reports vary about the late hours of 14th March, 2015, when at least six men, some claim seven, others between ten and twelve, four of whom were captured on CCTV, sacked the Convent of Jesus and Mary (CJM), Ranaghat, about 70 km northeast of Kolkata (West Bengal). The thieves stole a few valuables (not enough to qualify as the motivation behind their attack, say sources related to the church), raided the refrigerator, and vandalized the chapel where in addition to tearing scripture, shattering a bust of Jesus, stripping the crown off of a figure of Mary, they also, according to a convent source, scattered the Host—those wafer-thin white biscuits that stand for the body of Christ in Catholic liturgy. Before making off, one man raped Sister Claudia. The other two much younger nuns were spared. Sister Claudia was discovered lying in a pool of blood, alive but violently injured. As of today, the criminals are still at large.

Media responses to the incident were immediate. If we learned nothing else, it was that misogyny is condemnable, as is our ineffective justice system and effete law-enforcement. Some appended the rape to news about the destruction of a church under construction in Hissar village, Haryana. Paired up, the incidents at Hissar and Ranaghat have made perfect fodder for politicians and TV talking heads to voice tired opinions about rising anti-Christian feeling across India since the BJP’s victory at the national polls in 2014, prominently headlined by the ‘Ghar Wapsi’ campaign to reconvert and return Indian Christians to the Hindu fold. No doubt the rape as a meta-incident seems to encapsulate all the usual failures cited up to here. But it might also speak more intimately about traditional inequities that schools like the Ranaghat Convent of Jesus and Mary (CJM) seek to invert.

To clarify my ideas about the educational aims of CJMs I went to meet Sister Arina, current principal of my old high school, CJM (Fort). As I waited on a bench outside her office, I passed the time by examining a poster of Claudine Thévenet, the woman who founded the congregation of the Religious of Jesus and Mary (RJM) to which Fort Convent owes its inception. When Sister Arina and I finally sat down to talk, she recounted Thévenet’s story. I’ve taken the liberty to fill in the gaps.

France, 1793. The French Revolution is four years old, and growing. Feudalism has been abolished. King of France Louis XVI and his wife Marie-Antoinette are dead. Meanwhile in Lyon, Claudine Thévenet, a native Lyonnaise, is not yet 21 years old when the French Revolutionary Army lays siege to her city. By October, Lyon’s main fortification is decimated. Counter-revolutionaries deemed criminals are executed. Claudine’s two brother are among the fatalities. But moments before the guillotine descends, they entrust her with a stunning message, to forgive, as they have done their wrongdoers.

Later in 1818, on the bedrock of forgiveness, Claudine founded a Roman Catholic congregation of women and called it the Religious of Jesus and Mary (RJM). Its boarding houses and schools in France were designed to educate orphans and young girls and provide vocational help to the poor. Christian values and education, not charity, were the heart of its message. In 1842, five years after Claudine’s death, the women of RJM arrived in India where they set up 12 communities in Bombay, Poona, Shimla, Delhi, and Agra. Soon, RJM also travelled to countries in North and South America, Africa, the Middle East and elsewhere in Asia. Its schools in India, which until recently were primarily for girls, received the title of the Convents of Jesus and Mary (CJM).

My high school, CJM (Fort) in Mumbai, was one of the earliest CJMs outside France. Established in 1855, it got a permanent home next to the Holy Name Cathedral in south Mumbai after 1905. Then in 1981, Sister Claudia, a thirty something RJM nun was made principal at the school. Her rule was firm. Discipline soared. Students thrived. Her combination of tough love predictably rubbed some the wrong way. In time, she was transferred to a school in north India, and subsequently spent a decade in Nigeria on RJM’s educational projects, before returning to India.

Sister Claudia’s recent appointment as Sister Superior (not principal) at CJM (Ranaghat), where she also executed the duties of school bursar, overlapped a fraught period at the school. In February this year, reported rediff.com, the school received death and rape threats. These could have been a response to stricter rules instituted by a new principal, cautioning students against the use of mobile phones and texting in class, and playing truant, or to the firing of a security guard who was said to have been lax in his duties, or further yet to the expulsion of a student who had posted inappropriate content on a fellow student’s Facebook page. Or, were the threats made by land sharks inducing the school to part with more of its land of which some, reports claim, was recently sold? No one can say for certain. Nor has anyone found a direct link between the death threats and the attack on the school. And yet the sequence of these disconnected events appears to have found a grim finality in the rape of a nun.

Initially, like other observers, I too objected to the media’s fixation on the ‘nun’ part of the rape. Rape is a horror no matter who or what the victim is. That said, having been a student at CJM (Fort), I can see why a nun might represent a vivid paradox of cultural and political positions that make an easy target to those looking to take them down and make an example of such an assault. A nun is wedded to Christ but remains celibate. She is a model for female empowerment despite her, to me, questionable decision to sacrifice exploring her sexuality. But most of all she is an educator. In the congregation of the Religion of Jesus and Mary, to teach without prejudice is her calling, as is her religion.

Yet convent schools such as CJM (Fort), which was and still is a school for girls, knew where to draw the missionary line. In my time, catechism and Sunday school were reserved for Christian pupils. Non-Christians studied world religions. Conversion and proselytizing were as alien to the school’s objectives as were open discussions about sex. Aside from this latter shortcoming, physical strength through sports, sharpened verbal and mathematical skills, and grounded understandings of science and history were what most students came away with, no matter what your caste, community, home mother tongue, class, or locality of residence. The creed of live and let live was the air we breathed. Lunchtime meals defied ugly stereotypes of purity and consumption. Food taboos had no place at the table of easy camaraderie. Packed lunches of meat, fish, vegetables, and starch were eaten side and side and often shared. Not that prejudices did not exist. But the school did not tolerate a pupil thinking less of another in so many words. Sister Arina assures me that things have remained much the same in all these departments.

This could have something to do with the organization’s dedication to education in its most classical sense, from darkness lead me to light, or
तमसो मा ज्योतिर् गमय, which ultimately pushes for a freer world, female agency, and inversion of inequalities. To me, this is the ‘real’ religion behind RJM.

According to Chad M. Bauman, a scholar of Christianity in contemporary India, anti-Christian feeling gained traction around 1998 when the liberalizing reforms of 1991 first started taking real effect. It is not something that suddenly developed under the prime ministership of Narendra Modi. According to Bauman, critics of Indian Christianity view it as a proxy for the tangible effects of globalization on traditional Indian society. These include an influx of foreign monies and with it foreign ideologies, skill and merit based status systems rather than ascriptive (Hindu) ones, the blow to traditional class hierarchies through development work among tribal and low-caste communities, and more opportunities for women to enter the workforce. It is not surprising, he adds, that Christian communities and their social and educational work in this regard would seem to represent a secularist critique of Hindu nationalism. Even today, despite dozens of new non-Christian schools, especially in metropolitan areas, convent schools continue to project a more inclusive educational alternative to a cultural record of selective education.

In 2014, Sister Claudia was honoured for serving fifty years as an educator in the congregation of the Religious of Jesus and Mary (RJM), a duration that accounts for more than a third of RJM’s long history on Indian soil. As Sister Arina pointed out, fifty years is decades longer than most marriages last. To me, this represents the staying power of the liberal and largely secular energy that female Christian educators are able to inject into their work. This is a hymn to that energy.

Prajna Desai
Prajna Desai is an art historian, writer and curator based in Mumbai