A report from Ground Zero. Why it is always the poor 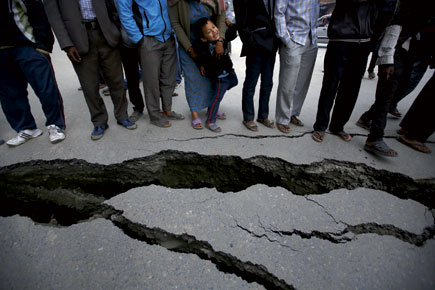 Only a few weeks ago, I, like thousands of others, was just another tourist with his family enjoying the heritage spots of Kathmandu. The Pattan neighbourhood of the city was one of those rare places where you can enjoy the rich heritage of South Asia in relative tranquility. There is noise, animation and beauty. Or at least there was.

Pattan, or at least the magnificent Durbar Square, has been reduced to rubble. A place of noise, certainly, but it’s now the cries of the bereaved and shouts of the rescue workers. Of animation too, but of a sort no city deserves. The beauty remains, just, in the walls of the old palace, miraculously unscathed, beyond the fallen masonry and blocks of brick.

No one deserves a catastrophe of this sort, of course, but one feels that Nepalis, all 28 million of them, deserve it less than many. After civil war, natural disasters, a political class as venal and incompetent as any in the region, comes an earthquake which, thankfully, was not as bad as it could have been. This was the only saving grace. Another few clicks on the Richter scale and much of the capital, and the western city of Pokhara, and pretty much everything between would have been rubble.

As it was, 7.9 was enough to kill probably around 10,000 people, though only half that number have been found so far. It was enough to paralyse Anusha Khatry, 16, who I saw as she lay stunned on a stretcher in Bir Hospital in central Kathmandu 48 hours after the quake. She had been brought all the way from Sindhulpalchowk district, some 70 kilometres but an agonising four-hour journey. She had not yet realised the extent of her injuries. Doctors said that if she walks again, she’ll be lucky.

It was enough, too, to kill three girls playing cricket on a street in Bhaktapur, on the outskirts of the city, and their mother, and to send their father insane with grief. He was last seen shouting that he had to join them.

And it was enough, of course, to destroy somewhere between 100,000 and 200,000 homes, rendering half a million people dependent on relatives, the state or the sky for shelter. Not one of these three is a particularly good option in a dirt poor country with some of the most inclement weather on the planet.

As ever in these situations, the world scrambled to help. First, the big big regional brother, India, with impressive speed and manpower. After a day of chaos at the airport, in part due to continuing aftershocks, the transporters began to arrive. Then everyone else. As tourists flew out, the emergency workers flew in. The hotels in Kathmandu stayed full.

For those first two or three days, the fear was palpable, a presence on the streets, percolating like a fog across the parks, the pavements, the roundabouts even, the parade ground where thousands upon thousands camped out under red or blue or orange tarpaulins. Eight sewing machine workers slept and played cards under one, waiting to return to their sweatshop where they stitched and slept 24 hours a day. “We’re waiting for [when] the 72 hours is up. Then we know we are safe,” said Saraj Rai Raja, 25. The three-day period had been advised as one during which aftershocks might occur, bringing down already damaged houses. A few metres away, Bavita Karki, 35, and her family sheltered from the sun, then the rain, then the sun, and then at night, the cold. Her house had disappeared. Her husband, a mason, was injured. “We have just the clothes we are standing in,” she said. “Where is the government?”

It was a question many were asking even in Kathmandu. Out in the hills, the government was conspicuous by its absence. In Swarathok village, where 71 houses had been reduced to rubble, householders crouched in cattle pens trying to warm themselves over guttering fires. They looked bitterly at helicopters flying overhead in the direction of the capital. “We know nothing about them… and they know nothing about us,” said Sumon Rag Giri. When Rashmita Shahstra, a health worker, went to the police for help, they told her there was “no plan” and they had “no orders” so she should go home and wait. Mid-week, she and thousands of others were still waiting.

We are still in the first phase. Disasters evolve, like diseases, with different symptoms and effects. From rescue being the priority, we are now in the humanitarian emergency phase. This is where many lives can be saved— or lost. Finally we will reach the reconstruction phase. Here the demands will be immense. Nepal has lost housing for up to a twentieth of its population, along with bridges, roads, schools and much else. It has also lost much of its cultural heritage. The newer buildings survived the shock on Saturday. The older ones, in brick and wood and plaster, did not. This included many temples, which will not be reconstructed, or at least not in the beautiful styles that were among the jewels of the region.

But the fact that it was the older buildings that were lost hides something else, another truth of earthquakes, wars, floods and riots that are the foreign correspondent’s stock in trade. Those who lived in the older, more precarious buildings, were the poor. Those who had the cash to move out or build themselves a better, stronger home, had done so. Almost all those I interviewed in the hospitals, the cremation ground and the villages were farmers, masons, shopkeepers, newspaper sellers, hawkers, labourers and so on, if not unemployed. As ever, it is those who have least who suffered most.

Jason Burke
Jason Burke is the South Asia correspondent of The Guardian and the author of The 9/11 Wars. His latest book is The New Threat from Islamic Militancy (Bodley Head, Rs 599, 288 pages)