Nehru, the Lady and Middle-Age Morality

How he juggled with supreme ease the personal and the public 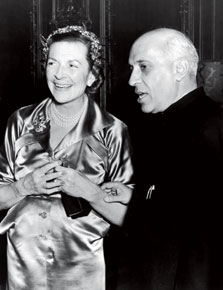 How he juggled with supreme ease the personal and the public

Jawaharlal Nehru was described, probably by NB Khare, the Hindu Mahasabha president, as “English by education, Muslim by culture and Hindu by accident.” Did he take this catholicity to the extent of marrying a Muslim? A Hindu-Muslim marriage might be lauded today as a triumph of integration. Then, it could have been the unmaking of Motilal Nehru’s intensely ambitious heir.

Realising this, was the future apostle of secularism calculating and ruthless enough to remove all trace of his youthful folly? A confidential British Intelligence report called the supposed marriage and its suppression ‘the most formative event in Nehru’s life’. Yet, there’s nary a word of it in his autobiography, which has been praised as ‘the most perfect piece of self-revelation since Rousseau’s Confessions’. Some might see this as evidence of extraordinary duplicity.

No, this isn’t BJP denigration of Nehru to deify Vallabhbhai Patel. It’s what Wing Commander Alan Campbell- Johnson of the Supreme Allied Command South-East Asia (SACSEA for short), reported to the Supremo, Lord Louis Mountbatten, on the eve of Nehru’s controversial visit to Singapore in 1946. The secret information that ‘when Jawaharlal, a Brahmin, married a Moslem woman, jeopardizing his whole position within the Hindu social system, it was Gandhi’s personal intervention as a religious leader which saved him from the full consequences of his action’ would have given Mountbatten a powerful hold over Nehru.

Campbell-Johnson later became Mountbatten’s press attaché in New Delhi and wrote Mission with Mountbatten. He collected the information on Nehru before joining SACSEA when he was in India working on a life of Lord Halifax who was viceroy (1926-31) as Lord Irwin. I read his ‘off the record’ report in Singapore when researching my book, Looking East to Look West: Lee Kuan Yew’s Mission India. SR Nathan, then President of Singapore, generously offered me a large cloth bag stuffed with papers from the British archives. Nathan formerly headed Singapore’s Security and Intelligence Division, and many of the documents were Intelligence reports. No one had examined them until he urged me to do so.

That’s how I learnt Nehru’s first fateful encounter with Edwina Mountbatten almost didn’t happen. As soon as World War II ended, Nehru announced he would go to Singapore. The excuse was to check how Mountbatten’s British Military Administration was treating Indian National Army troops and to arrange for their legal defence. His relations with Subhas Chandra Bose were hardly cordial but Nehru knew what the Indian public wanted.

Sir Hubert Elvin Rance, Burma’s last British governor, refused transit facilities. Air Vice-Marshall LF Pendred, the BMA’s intelligence chief, thought Nehru’s request ‘should be refused’. SACSEA officials were determined to make things as uncomfortable as possible if he insisted on going. He wouldn’t get official transport. Indian troops would be confined to barracks, and his presence played down in every way.

They reckoned without Mountbatten’s political antennae which were fully as sensitive as Nehru’s. The Supremo had unsuccessfully tried to see Nehru when he visited Bombay in January 1944 and Nehru was imprisoned in the nearby Ahmadnagar Fort writing The Discovery of India. Determined to make up for that failure, the Supremo told the BMA he was “extremely displeased” it didn’t realise Nehru was “one of the most important political figures in the world.” Apart from being “disloyal” to him “personally”, the BMA’s churlishness “would invite worldwide criticism which Nehru would not fail to exploit.” At the same time, Mountbatten told SK Chettur, British India’s ICS representative in Singapore, Nehru was “a man of honour” who would not embarrass him “by carrying out any agitational activities”.

Mountbatten invited Nehru ‘as an official representative of the All-India Congress’ and treated him to almost head of government honours. Two senior British staff officers received him at Singapore’s Kallang airport with Brigadier JN (Muchu) Chaudhuri, later India’s Chief of the Army Staff, who became his personal aide during the visit. Chettur, Rajabali Jumabhoy, a prominent local businessman, and Tan Kah Kee, an overseas Chinese who was so important that when he died in Beijing in 1961 Zhou Enlai personally supervised his state funeral, were also present. Formalities over, Chaudhuri took Nehru through about 2,000 men in INA uniform with tricolour badges (courtesy Mountbatten) to Government House (today’s Istana or presidential palace) where India’s future (and last) viceroy entertained India’s future (and first) Prime Minister over tea.

Mountbatten and Nehru then ‘rode in state’ in an open car past the 300 INA men who had marched to Government House shouting revolutionary slogans, to the Indian YMCA Welfare Centre in Stamford Road. Edwina waited there with Indian Red Cross workers. The Tamil Murasu newspaper called it ‘the neatest diplomatic stroke and so casually executed that Lord Louis Mountbatten displayed real genius.’ The cheering crowds included many ‘former Indian soldiers’ (euphemism for INA personnel who were technically rebels) whose “Nehruji ki jai!” was laced with cries of “Lord Louis Mountbatten ki jai!” setting the precedent for Delhi’s adulatory mobs in 1947.

Meanwhile, a ‘seething and bubbling mass … just boiled all round the YMCA’. Mountbatten also records that just as he and Nehru entered the building, ‘a roar as of a dam bursting fell upon our ears, and the crowd burst through every door and window … in no time they were upon us.’ Edwina was knocked down and disappeared under the mob. ‘The Pandit screaming: “Your wife; your wife; we must go to her”, linked arms with me and together we charged into the crowd in an endeavour to find her. Meanwhile, she had crawled between the people’s legs and had come out at the far end of the room, got on a table and shouted to us that she was all right.’

Nehru’s account of what he called his ‘unusual introduction’ to Edwina sounded prosaic in comparison. Writing to Dorothy Norman 17 years later, he mentioned ‘a wild rush of Indian soldiers, presumably wanting to see me’. Edwina had disappeared when they entered the room. ‘I think I got up on a chair to have a look around. Soon Lady Mountbatten crawled out of the milling crowd. She had evidently been knocked down by the soldiers rushing in.’

Mountbatten gave a small dinner party that evening for Nehru who told ‘Chaudhuri on his way back he hadn’t enjoyed an evening with English people so much since he had come down from Oxford (actually, Nehru was at Cambridge) more than 30 years ago.’ Nehru acquiesced when Mountbatten asked him not to lay a wreath at the INA’s War Memorial ‘since they had fought not only against us but against the local people of Malaya.’ He also promised not to incite the Indian troops. Mountbatten ‘found him most reasonable.’

Whatever he had promised, Nehru wasn’t going to alienate a significant political constituency. ‘He slipped away quietly the following day and left his personal wreath’—some roses Singaporeans thought he had bought for Edwina—at the memorial. This was a wooden replica of the original monument Mountbatten had destroyed. It was hastily erected on the same spot and quickly dismantled after Nehru’s car sped away and the 300-strong crowd dispersed. Nehru also did his duty by Bose by instructing a local lawyer, Radhakrishna Ramani, to see to the INA’s legal needs.

The Mountbattens were free of conventional prejudice. Edwina was especially oblivious of differences. Their daughter, Lady Pamela Hicks, says her mother couldn’t remember once whether the “lively” man next to her at dinner was Black or White. Her association with the Caribbean singer Leslie Hutchinson scandalised London society; Paul Robeson was a family friend. But Mountbatten was also an operator. He didn’t only turn a blind eye to Nehru’s truancy, he colluded with it. The wooden replica could hardly have been built and dismantled so swiftly without his consent.

His motives were as devious as his assessment of Nehru was ambivalent. He hoped friendship with the British would diminish Nehru: ardent nationalists would suspect “that one who fraternized openly with representatives of the British Raj was a bit of a Quisling”. That might also temper Nehru’s radicalism. Both calculations seemed fulfilled in Singapore’s Jalan Besar Stadium. The INA had rallied in full force with tricolour flags, a large portrait of Netaji in military attire, uniformed guards of honour and a brass band playing martial Azad Hind tunes like Dilli Chalo! Malay, Chinese (including Communists) and Indonesian groups had also turned up with banners and flags. The British feared hostile rioting.

Nehru saved the day by rebuking the packed crowd for chanting the INA’s “Blood! Blood! Blood!” slogan. Netaji had done great work, he said, but the time had come to abandon ‘provocative and unwise’ rhetoric for peaceful, disciplined and constructive effort. Instead of hurling abuse at the Raj he urged them to realise his dream of a united Asia. The British were delighted to see disappointed soldiers slipping away from the stadium. Mountbatten gloated in his diary, ‘Altogether we must have stolen part of the old boy’s thunder, besides publicly linking him up with us …’

He didn’t know then that British rule in India would end so soon or that Nehru himself would want him as viceroy. But that day’s happenings forged lifelong links. Nehru and Edwina stumbled into the relationship, which Mountbatten made the most of. He ‘bewitched’ Nehru, according to a biographer. Pamela believes her mother and Nehru fell deeply in love in Singapore but the relationship remained platonic. A packet of Nehru’s letters was by Lady Mountbatten’s bedside when she died in her sleep in Borneo in 1960. She willed the entire collection of his letters to her husband.

Given this attachment, a private marriage was unlikely during the 28 years of Nehru’s widowhood. Apart from Edwina, there was his daughter to consider. The scandal-mongering MO Mathai was around some of the time. Gandhi wasn’t. If Campbell-Johnson is right, the event must have taken place before 1916 when Nehru, aged 27, had an arranged marriage with the simple Kamala Kaul 10 years his junior.

Young men who sow wild oats (unlike Oscar Wilde who boasted ‘I have never sowed wild oats but I have planted a few orchids’) merit indulgence. Fifty-three years ago, I read scrawled on a wall in rural Bengal, ‘The sins of youth are hardly sins,/ So frank and free are they./ ’Tis but in middle age that we/ have need of morality.’ No wonder Gandhi who by his own admission knew a great deal about sex and sin helped out.

But perhaps Campbell-Johnson made a colossal mistake. Perhaps he confused Nehru with his sister Vijayalakshmi. Her involvement with Sayed Hussein, the handsome, aristocratic British-educated editor of Motilal Nehru’s paper, The Independent, and later India’s first ambassador to Egypt, was once the talk of the town. Otherwise, history would be forced to re-evaluate the long-term political implications for India of its first Prime Minister’s ability to dissimulate and juggle personal and public obligations.