Milan Kundera and the Art of the Navel

In Milan Kundera's new novel the joke is on himself, and even Stalin, his favourite beast, can't resist laughing 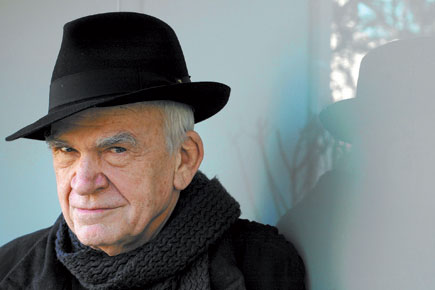 He is the other K from what was once Czechoslovakia, and for the last 40 years, a Parisian, still looking back with a Rabelaisian smile, as if displacement changes little: ‘the struggle of man against power is the struggle of memory against forgetting’. This aphorism appeared in English 35 years ago, when The Book of Laughter and Forgetting made Milan Kundera an international fashion statement in literature. It defied the straitjacket of political fiction; it abhorred the self-referential romanticism of a memoir; it eschewed the didacticism of an existentialist’s ruminations; it abandoned the linear structure of storytelling; and, yet, it was all that and more. Kundera, unlike many other disillusioned communists, refused to fall into what he calls the ‘auto-culpabilisation’ machine, where punishment seeks crime. He ran away from an ideology that was an ebony black joke, and realised the many uses of laughter in a world that declared war on memory.

Four years later, The Unbearable Lightness of Being, his most popular novel, made us marvel at the possibilities of imagination in a place where the realism of socialism had banished the freedom of dreams—what with the Stalinist crushing of Dubcek’s Prague Spring. Now, the Kundera model was getting clearer to his international fan base. On his pages merged, in perfect harmony, the perversions of communism and the poignancy of drifting; he shuttled between the erotic and the enigmatic, the sensuous and the cerebral, the sublime and the ridiculous, the profane and the pathetic like a shape-shifting magician; he was philosopher, prankster, debunker, hedonist, absurdist, existentialist, joker, voyeur, memoirist and navel gazer. With the publication of Immortality (1990), his last big book, Kundera was in the vanguard of European avant garde, reimagining the art of the novel in a continent where it was born, and where, in his own words, it was being abandoned.

These three books formed, for me, the essential Kundera. By now, there were already any number of Kunderaesque moments that aficionados could pass around in a literary evening. You have seen the woman who wears only yellow panties and another for whom orgasm is her religion. You have read a long meditation on kitsch, the aesthetic ideal of totalitarianism. (“My enemy is kitsch, not communism,” cries out Sabina in The Unbearable Lightness of Being.) You are now familiar with ‘the eternity of return’ and neologisms such as Imagology, and with outcasts who have been immortalised by police files. ‘Censorship is the mother of metaphor,’ wrote Borges. Kundera, an escapee from a Stalinist republic of lies, turned that experience of enforced lie into some of fiction’s most original moments; he looked into his own political and cultural inheritance, its lost luminosities and gathering darkness, with a sense of aloofness and playfulness, all the while telling us that, in the end, art alone preserved the sanity of the European entangled in history.

So the struggle continues, and on pages, though, it began to shrink in size. Kundera’s short-novel phase started with Slowness (1996), also his first originally written in French, and in which he and his wife Vera themselves are characters, the latter at one point portraying herself as the wastebasket of his dreams. They also talk about the imminence of a book of nonsense by him. That, in retrospect, was an overstatement, for the nonsensical, in varying degrees of whimsicality, coexisted happily with the big ideas in any of Kundera’s novels, or maybe it was as if Cervantes, Sterne, Rabelais and Kafka were hovering over him, reading between his lines for a vindication of their art in a different world, a darker, funnier world that needed the metaphysical and the meaningless in equal measure. So here we are with his new novel, the slimmest, and his first in 13 years. The Festival of Insignificance (Faber & Faber; 115 pages; £14.99), so far, evoked more jeer and less awe. The silliest, said those who were looking for a ‘profound’ encore from the master. Such a sad retreat, sighed the others who concluded that once the writer, now 86, was out in the sun, without the receding shadow of communism in Eastern Europe to bring the best out of him, he became bored with freedom. Admiration came grudgingly, mostly out of respect. No one was ready for a book of…well, empty laughter, easily forgettable. Perils of misreading.

Nothing consequential happens in this book, which, like most of his novels, is told in seven parts. Five men, floating mostly in their own comical irrelevance, become characters in a narrative built on stray elements from Kundera’s previous fiction. Alain, as he walks down a Paris street, becomes obsessed with the profusion of naked navels: ‘But how to define the eroticism of a man (or an era) that sees female seductive power as centered in the middle of the body, in the navel?’ Around the same time, in the Luxembourg Gardens, Ramon, who just avoided an exhibition of Chagall paintings, meets his old colleague D’Ardelo, who a short while ago was told by his doctor that the suspicious symptoms were not cancerous. Still D’Ardelo lies to Ramon that he has cancer, and invites him to his birthday party. Ramon gets his friends Charles and Caliban, a failed actor, the job of waiters at the birthday party.

Soon we’ll learn that Alain’s navel fetish has its origin in the story of his mother who never wanted him to be born. He was ten when he last met his mother, who came to see her former husband. As Alain emerged out of the swimming pool, she fixed her gaze on his navel. ‘It seemed to him to express an inexplicable mix of compassion and contempt.’ Today, his best conversations are with the photograph of his mother on the wall. He is an incorrigible apologiser. At the cocktail party, where Ramon arrives in a foul mood, Caliban, in a nonsensical impersonation, speaks only in a language nobody around him will understand; still, his Pakistani babble has seductive powers over a Portuguese girl. In between, in trademark Kundera style, there are asides on various human states, though none as memorable as the earlier ones. On good mood: ‘Only from the heights of an infinite good mood can you observe below you the eternal stupidity of men, and laugh over it.’ On friendship: ‘In my unbeliever’s dictionary, only one word is sacred: friendship.’ On the evolution of the navel: ‘Men’s bodies were left with no continuation, completely useless, whereas from out of the sexual organ of every woman there came another cord, with another woman or man at the end of each one, and all of that, millions and millions of times over, turned into an enormous tree, a tree formed from the infinity of bodies, a tree whose branches reached to the sky. Imagine! That gigantic tree is rooted in the vulva of one little woman, of the first woman, of poor navel-less Eve.’ On brilliance and insignificance: ‘When a brilliant woman fellow tries to seduce a woman, she has the sense she is entering a kind of competition. She feels obliged to shine too, to not give herself over without some resistance. Whereas insignificance sets her free. Spares her the need for vigilance. Requires no presence of mind. Makes her incautious, and thus more easily accessible.’

The four friends—Alain, Charles, Ramon and Caliban—are the invention of the ‘Master’, the narrator, whom we may call Milan Kundera. The Master unleashes his favourite beast among the friends, lest the story, or the absence of one, lacks the resonance of historical farce. Whenever Stalin is on the page, Kundera regains his old sardonic self. So the story of the 24 partridges killed by Stalin, as told in the memoirs of Nikita Khrushchev, is retold. When Stalin told the story to his comrades, ‘nobody around him any longer knew what a joke is, and in my view, that’s the beginning of a whole new period of history.’ And what did explain Stalin’s affection for Kalinin, a loyalist who suffered from sudden urinary urges, and after whom he named the German city and the home of Kant? “After I die, intend to wake up every ten years to check whether Kaliningrad is still Kaliningrad. As long as that is the case, I’ll feel a little solidarity with humankind, reconciled with it, and can go back down into my tomb,” says Ramon. When the friends unite in the Luxembourg Gardens, the theatre of insignificance reaches its comical-historical perfection when a man with uncontrollable urinary urge ducks behind the pedestal of Marie de Medicis. A hunter blows off the great lady’s nose, and exposes the pissing old man—and bursts into laughter. When Stalin laughs from the farthest corner of history, Kundera, unfairly criticised as the runaway dissident by some of the heroes of the Velvet Revolution, can’t help sharing the joke just for one more time.

No other novelist has meditated on the art of the novel as Kundera did. So serious readers are warned: Self-parody too is a joke that can be told only in a novel that celebrates the meaning of meaninglessness. The other K after Kafka has rewritten the book of laughter and forgetting for an age in which Stalin in costume comes to play at the Luxembourg Gardens.