Memories of a Movement

A generation of middle-class boys who grew up in Madras learnt something curious from the Sri Lankan refugees: that there is such a thing called ‘a cause’ 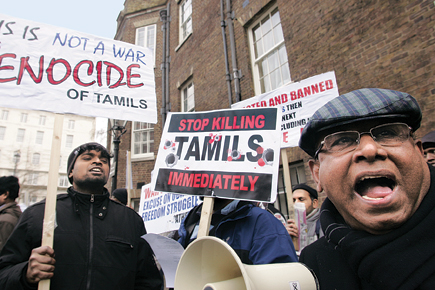 
I grew up in a Brahmin colony in Madras, where boys practised the bowling action of Malcolm Marshall for hours but we knew that what was important in life was math, physics and chemistry. Life was not called a journey then. It was a preparation. For one objective-type entrance exam many years away. We thought boys in the other worlds, too, were prepared by their residential colonies for the same fate. So we were confused when we first met the foreigners—the Sri Lankan refugees who began to pour into Madras. These boys looked like us. Though they spoke Tamil with a funny accent, we could understand them. But they were different. After they failed in some monthly test or the other, they did not hide for a few days. They did not care. They would emerge the same evening with bat and ball. The only thing that made them unhappy was the thought of their homeland. They spoke of Tamil Eelam, of the revolution that would soon come and how they would go back home one day. They were confusing.

Patriotism, to us, was an arcane historical element. Even when we acted as extras in the school play, in which we had to annually roll on the floor holding the national flag high as Britishers (Anglo-Indian boys, always) beat us, we thought it really dumb to get thrashed instead of running away. What was the whole point? We knew of practicality at a very young age.

The Sri Lankan boys first hated Madras. I still remember sitting on a wall with Tony, who told me, “We don’t shit on the road, we don’t lift our lungi and fart like you people.” Also, middle-class colonies took some time to fully accept them since The Hindu was referring to them as refugees. I remember, every time Tony was about to bowl, he would assume a serious face and set the field. And I would be outraged at having to move at his instruction. How could a refugee instruct me?

Slowly, the LTTE emerged as a potent force. It was strange that a militant organisation that could blow up its own men, women and children for the Tamil cause should have an English acronym while the governing bodies of football and chess retained their lingual nomenclatures. The LTTE clearly wanted to reach out to the world through more pronounceable names. As the power of the LTTE grew, the boys in my colony slowly realised that this thing called ‘cause’ was not an alien phenomenon. Outside our colony, among the non-Brahmins who were the vast majority in Tamil Nadu, there was a Tamil pride that had the properties of a wound. It was puzzling because you wanted to ask who did anything to wound them; what were they angry about?

Unlike Sri Lankan Tamils, the Indian Tamils had to search desperately for a cause. And they periodically found it in considering Hindi an imperialistic force. In fact, there were times when some of us who studied Hindi at the Hindi Prachar Sabha were asked by our parents not to tell the bus conductor where we were going.

Indian Tamils finally did find a worthy cause as the Sri Lankan situation worsened. Madras became the backyard of the LTTE. Militants could walk in and out anytime. Until the night when Rajiv Gandhi was assassinated. The investigation into the assassination unearthed the extent to which regular office-going Tamilians in Madras were involved with the LTTE.

I was 20 when I went on my first outstation journalistic assignment—to the town of Chidambaram. I went with a photographer called Kannan. One night, in the hotel room, I heard him weep. Hours later, he woke me up and told me something that terrified me. “I was with the LTTE,” he said. “I was not involved in any violence. I just knew some people who were involved. That’s all.” He was picked up by the Special Investigation Team on the day of his sister’s marriage, from the marriage hall. “I was not beaten up or anything. They asked me what I knew. I told them I knew nothing. I felt proud for being so solid. For the next one week, I was put in a cell without any food. Finally, a senior cop came and asked me if I had eaten anything. I said ‘no’. He then screamed at someone and said he would return with food. He came back with a groundnut and rolled it on the floor towards me. I broke down. I threw all my ideology out, and I sang.”

In the years after Rajiv Gandhi’s assassination, sympathy for the LTTE had waned. But in time, the brotherhood returned. Now, in the LTTE’s final moments, the Tamil Eelam cause is growing stronger in Tamil Nadu. College students are collecting money for the LTTE. Tamil politicians have publicly stated that the LTTE is not a terrorist group (“Freedom fighters,” as Musharraf would say). From the point of view of a Sinhalese person, Tamilians in India are behaving exactly like ‘jihadis’. And that is a correct analysis.