Making a Shikhandi of Jaswant’s Jinnah

The unceremonious expulsion of this last survivor of the Vajpayee era smacks of a BJP desperate to shirk the blame for its poll debacle. 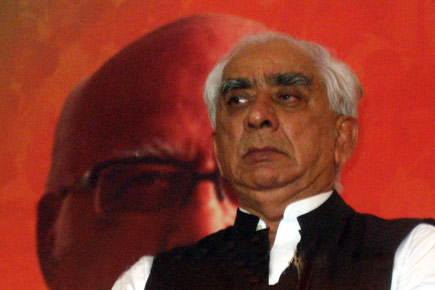 The unceremonious expulsion of this last survivor of the Vajpayee era smacks of a BJP desperate to shirk the blame for its poll debacle.


There is something fitting in the fact that it is MA Jinnah who finally helped nudge the BJP out of its confusion into the hardline position that the RSS so wanted it to adopt. But for once Jinnah is just an excuse, the truth is Jaswant Singh’s expulsion is an act of opportunism by Rajnath Singh and the collection of the BJP’s backroom boys who are overkeen to be seen following RSS chief Mohan Bhagwat’s bidding.

After all, the contents of the book have been no secret for years. On Jaswant Singh’s webpage, it is easy to access an interview with Anjum Niaz of the Dawn that dates back to 2007. Talking about the book, he then said, “I was unable to convince myself that Muhammad Ali Jinnah was a demon (as some Indians believe).’’ If this was a matter of such importance should they not have acted then, or against LK Advani in 2005?

The party’s own constitution says little that would justify this expulsion. The only two clauses I believe could even remotely apply are those that relate to ‘acting or carrying on propaganda against any programme or decision of the party’ or to ‘acting in a way calculated to lower the prestige of the party or carrying on propaganda against any party unit or its office-bearers’. Apparently defiance of the party president’s orders, as is the case with Vasundhara Raje Scindia, does not lower the prestige of the party, but writing a book does. At the very least, for a party that likes to pride itself on its discipline, the expulsion could have been effected through due process. The self-righteous indignation that ostensibly propelled this summary expulsion, an act utterly lacking in political dignity, speaks of the nature of the men who have inherited the party.

This decision was taken on day one of the Chintan Baithak, supposedly called to discuss issues related to the party, not a book whose contents are no cause for surprise. The baithak (meeting) would have been better off discussing a question Jaswant Singh raised after the BJP poll debacle: “Shouldn’t there be a correlation between performance and reward?’’ He was not alone; others like Arun Shourie and Yashwant Sinha had also lent their voice to the demand. But even then Sinha had apprehended: “I am sure a detailed review would be instructive and show us the path for the future… We failed to carry out a review after our defeat in the last election. I am getting a sinking feeling that once again there is a conspiracy of silence.’’

Welcome to this conspiracy of silence. Rajnath Singh is a canny but shortsighted political operator, even if as a thakur acting against another thakur, he has taken a step unprecedented in Indian politics. In doing so, he has deflected attention from his own shortcomings, and it is no surprise that he has been able to take along the entire second-rung leadership that is hoping to inherit the party after Atal Behari Vajpayee’s decline.

The expulsion serves two purposes: it shields them from the blame that should come their way for the poll debacle and it gets rid of the last remnant of the Vajpayee era. Jaswant Singh is a man in the Vajpayee mould. He never did think much of the RSS’ influence on the party, nor did he, like Vajpayee, make any secret of his fondness for fine wine and whisky. In this, he was far more of an anathema for the RSS than anything he could say about Jinnah.

The expulsion also brings to an end any debate about the RSS’ hold on the party. It is easier to predict where the party is headed now. Varun Gandhi could not be expelled for his extreme views, but Jaswant Singh has been expelled for his moderation, however misplaced. Time after time, the RSS leadership has called for a return to core issues, and hardline ‘core issues’ are what we will see more of, even if it is by no means clear this is what the party needs. There is little evidence that the electorate prefers a Varun Gandhi to a Jaswant Singh or that such a choice is the way forward.

None of this is to defend Jaswant Singh views on Jinnah—I personally believe his reading of the man is deeply flawed and ignores historical fact, but that certainly does not constitute reason for expulsion. Reacting to his expulsion, Jaswant Singh has said: “The day we start questioning thought, reading writing, publishing, we are entering very, very, dark alleys.’’ He is right, but in trying to uncover the true face of Jinnah he may have unwittingly helped the BJP recover its own truth. The BJP we are left with after his expulsion is a BJP for whom Jinnah should be an ideal. After all, he created a nation in their image, a nation based on the faith of the majority with no room for diversity, or for divergent views.