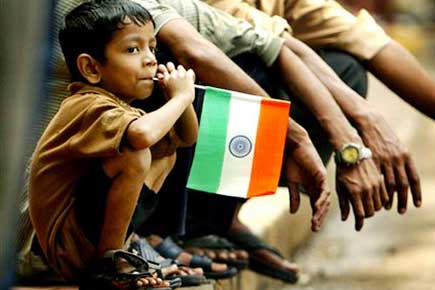 
I avoid multiplexes like the plague, but the affliction is mine: when watching a film I need my environs to fade to zero. A trilling cell phone, a silent but glowing MMS, or even a nearby slurp from a beverage can be enough to irreversibly evict me from the celluloid world. I made an exception recently for a film that absolutely begged to be seen on the big screen. It had been nearly three years since my last multiplex visit. I found that some things had changed.

As the lights faded and I settled in, the screen lit up with AR Rahman in white. Followed by Lata in white. Then one after another an entire constellation in white: Balamurali, Bhimsen, Jasraj, Asha, Jagjit and on and on. I sat transfixed. Such sublime music! The song washed over me in waves and cradled me to a place of immense pleasure. A few minutes into this rapture I felt I was being watched. The rows in front of me were empty; I turned around to look behind me. The entire audience of about a hundred was on its feet.

I continued to sit all the way till the tricolour flew in a blaze of digital ripples and everyone sat down. I was wrapped taut in cling film and stapled to my seat. I could not stand.

That night I had a nightmare. I saw a fat balding man, evidently the owner of Fame Cinemas, at the theatre’s AV controls, grinning deviously. He pushed a button and the anthem played at every one of the 16 screens of the multiplex. In each theatre, all the moviegoers popped up like so many jack-in-the-boxes. The anthem over, they sat down. And the fat man, now cackling, pushed the button again. And everyone popped up again. And again, and again, and again. Sweat streaming down their faces, children crying, old arthritic women bending over. The fat man, by now hysterical, was screaming something in my ear. I woke up with a start, drenched in sweat.

So I must have gone to bed rationalising my inability to stand up for the anthem. But why could I not stand?

I put a searchlight on what I was feeling as the anthem played. It’s a brilliant tune. I thought of Tagore and felt afresh the contours of his hold over me. I applauded Rahman for the superb musical arrangement. I felt a rush of affection and deep gratitude towards each performer, especially DK Pattammal when she growls “Vindhya Himachala” on a single low note, an impish grin lighting up every crease on her ancient face. But what else? What else?
The thing is, whatever else I felt is deeply personal. There might be labels for these things but that matters little. I wasn’t about to share such personal feelings in public with complete strangers. And certainly not because someone at Fame Cinemas pushed a button.

At the same time, I can’t help look out and wonder if this anthem-at-the-movies trend is symptomatic of something. I am old enough to remember the early seventies, around Bangladesh’s birth, when theatres used to play a blurry newsreel before the movie—almost always Mrs Gandhi resplendent in a crisp cotton sari—and the anthem at the end. But that was war-time. Which war is it this time? Or is it more innocent: just a thoughtless emulation of Americans at a baseball game?

Two months after this incident I broke my no-multiplex rule yet again. This time, there was a notice on screen before the anthem played that read: “please stand for the national anthem.” Fame Cinemas is clearly watching me. I am trying to live up to their gaze.

Rimli Sengupta
Rimli Sengupta is a willing refugee from engineering academia who has recently taken to writing. She writes in both Bengali and English.