A review of a long speech 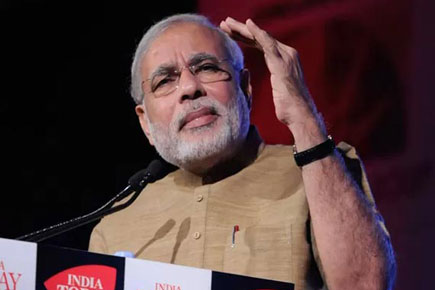 A review of a long speech


It is in the nature of public speaking, and what it does to the plumbing of an overweight man, to make even an orator of Narendra Modi’s experience appear somewhat nervous in the first moments. Especially when the event is indoors, and the audience is not a semi-literate crowd at a vast distance, but a class that considers itself the elite of Delhi, invited through 20-inch long invitation cards and seated around round tables in a banquet hall at the Taj Palace. And the speaker is a man who is acutely aware of hierarchies and probably judgmental enough to know the general cruelty of opinions. Also, a man who believes that everything he does is high stakes. Modi speaks slowly, enduring the involuntary shallow panting from his chest that public speakers dread—and the audience in the hall can hear. Then he makes a surprising move. Less than a minute after he began his ‘Leader’s Lecture’ at the India Today Conclave, he breaks his speech to say that everyone should now watch a video, and he goes back to his seat. About 15 minutes long, it is promotional material that announces the achievements of Modi’s leadership of Gujarat.

Among the lovers of Modi who hope or believe that he will be the next Prime Minister of India, there are highly educated Hindus who consider themselves reasonably humane despite their affection. They claim that they love Modi not because of the slaughter of Muslims in 2002 in Gujarat when he was the able Chief Minister of the state, but because he is smart, because he has ‘vision’. But they will struggle to cull the evidence of their claim from the substance of his many speeches. Nothing in them contains what people who can read and write would even remotely consider startling wisdom. Maybe he had to dumb down for the masses? And on other occasions, appease businessmen and non-resident patriots with valorous nothings? Maybe he was waiting for something like the India Today Conclave to show his depth of intellect?

When Modi returns after the commercial, he has fully regained his poise and there is no doubt he is an excellent orator. His topic is, ‘NaMo Mantra: Will it work for India’—meaning, can he do to India what he claims to have done to Gujarat? He says he has no “mantra or tantra”, and pitches his talk around the idea of “thinking differently”. Thinking, he says in English, “out of the box”. By way of example, he says that the Government’s employment guarantee scheme, which assures employment or wages to the poorest of Indians for 100 days in a year, must be positioned not as a social welfare measure but as a conscription call to the poor to dedicate 100 days of their lives to the nation. There is applause from some of India’s richest people, as if to drown out the canned laughter of the poor.

A few weeks ago, when he spoke to college students in Delhi, he was just as school boyish. About his extraordinary optimism: “I say the glass is always full—half with water, half with air.” And, about his textile policy: “…from farm to factory to fabric to fashion to foreign.” Now in slow motion, don’t miss the alliteration. When he reached the ‘foreign’ part, he dramatically pointed upwards as the audience, for some reason, erupted in ovation. The policy, which is called ‘5Fs’, is about making the whole biology that creates garments, and the garments themselves, in India, and exporting them to ‘foreign’.

In the Taj Palace banquet hall, there is a good moment when Modi says he went to meet Prime Minister Manmohan Singh and “nobody spoke”. He pauses for the laughter, and says, “Then only I was talking,” which, of course, leads to more laughter. He claims to have given an exquisite idea to the Prime Minister, something about converting solid waste in towns into fertiliser and selling it cheap to the farmers who farm around those towns, thus saving subsidy funds on chemical fertilisers. The cheap fertiliser would also, according to Modi, lower the price of food, thus ending malnutrition. The economist Prime Minister probably said the right thing in these circumstances: make a report. Modi took him seriously and sent a “2-kg” report. Applause.

Then, Modi says that the Prime Minister invited him to tea one day and since he did not want to have free chai, gave him another idea. A portion of the border between India and Pakistan runs through the deserts of Rajasthan and Gujarat. Because of the quality of the soil, “the fence keeps collapsing”. So Modi’s idea to Manmohan Singh was that the Government ask the Border Security Force to plant solar panels over hundreds of square kilometres on the desert. This way the border will have a fence that produces solar power even as it somehow prevents infiltration. Applause. What was the Prime Minister thinking when he heard this? Why don’t hostile neighbours usually have hugely expensive fences: for instance, millions of solar panels? Why is it that not a single country has large investments right on a border it shares with a heavily armed enemy? Is this idea worth the tea I gave this man?

Is it possible that after Modi left, the Prime Minister held his stomach and rolled on the floor with laughter? When the session ends, Modi steps down to sit at a high table and dine with a few chosen people whose seats have been marked by cards bearing their names. Industrialist Ajit Gulabchand discreetly switches two cards so that he can move to a chair closer to Modi’s.

People leave the hall, most of them in awe, even though it appeared that if Modi had given his ‘Leader’s Lecture’ in a school debate contest, he would have lost. But how did it come to be that those who would have won, some of them at least, are among his biggest admirers?