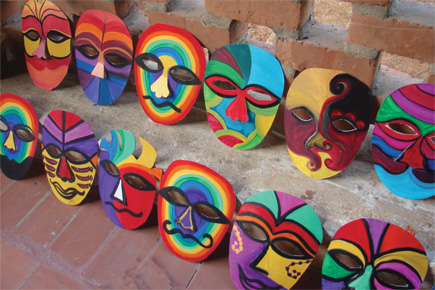 “Now he definitely went through the wrong door,” murmurs a friend, as we watch a flamboyant young man with a ‘girly’ voice make the rounds at a party, his quiet, unassuming wife in tow. The ‘wrong door’ thesis is gossip du jour in hip, urban circles. It’s the adult-rated version of picking daisies: he loves men… he loves them not. The more attractive the boy, the more fevered the debate.
Since first-hand testimony is rarely available—Indians will readily discuss anyone’s sex life except their own—we are usually forced to rely on more ambiguous ‘clues.’ He looks too often at men; or perhaps, he looks too closely at women’s clothes. He doesn’t flirt with women; or he tries way too hard with them. To make matters worse, the ‘now I’m out, now I’m not’ lifestyle favoured by upmarket queers offers little help to inquiring minds who need to know.

Our sexual guessing game mirrors the fun-house quality of homosexuality in cosmopolitan Bangalore. “No one is really ‘out’ in India,” scolds a colleague, when I ask about a Page 3 staple who seems unabashedly gay—he dutifully attends the pride march every year—and yet lives with his wife and kids. It’s not entirely true, but most gay men in Bangalore society do seem to keep one foot firmly in the closet, even as they parade their boyfriends around town. Like the fashion designer who conveniently developed amnesia about his well-publicised past, and now plans to marry “a nice girl my mother finds for me.”
But progress wears many guises, and idle chatter about gay proclivities may be one of them. For most Indians, homosexuality has been, if not unthinkable, then certainly unmentionable; a demonic sexuality to be terrifyingly conjured into existence if we were to carelessly utter its name. Social chitchat about “swinging the other way” is at least a step toward acknowledging reality: Look ma, there are homos in Bangalore! The greater irony is that the semi-closeted lifestyle perfected by Indian men relies on our insatiable thirst for gossip. Our chatter about their sexual preferences allows them to be ‘out’ without ever having to openly declare themselves as gay.

“Gossip is… worth watching as a barometer of our aspirations,” claimed Nicholas Lemann. It is also an excellent measure of our anxieties. When straight upmarket Indians work this hard at honing their newly acquired gaydar—often with mixed results—it’s not always for the nice reasons. As women well know, gossip is also the genteel version of witch-hunting. Like crypto-McCarthyites, the paranoid among us are constantly looking for poofters under the bed, sometimes in our own. Wait, maybe that ex-boyfriend who hated kissing was actually gay!

Heterosexual panic centres on that all-important question: what makes a man gay or straight? When Swabava Trust launched Bangalore’s first gay helpline, they were inundated by calls from straight men seeking reassurance about their sexuality. “There are quite a few anxious callers worried that though they have never slept with another man, they sometimes find the male body attractive or display behaviour that they think is effeminate,” executive director Vinay Chandran told Time Out magazine.

When homosexuality remained unnamed, there was no need to label androgynous, effeminate, or homoerotic behaviour as gay or straight. Indian men could hold hands, cuddle, even have sex with other men without worrying about their sexual identity. As that old queer Michel Foucault was wont to point out, the term “homosexual” appeared in the 19th century in an effort to categorise ‘deviant’ sexuality, transforming sodomy from an act into an identity. “The nineteenth-century homosexual became a personage, a past, a case history, and a childhood, in addition to being a type of life, a life form… Nothing that went into his total composition was unaffected by his sexuality,” Foucault wrote in The History of Sexuality, “The sodomite had been a temporary aberration; the homosexual was now a species.” Old-fashioned silence had its upside.

Hoshang Merchant raised hackles when he dismissed the term ‘gay’ as a Western affectation, writing in his book Yaarana, “[H]omosexuality as it is known in the West does not exist in India. Most men are bisexuals. Or, to put it another way, most homosexuals get married due to societal pressures.” Or on the cocktail circuit, simply because they can. That marital leg in the closet allows them to enjoy the privilege of acting gay in the liberal confines of high society without bearing the burden of a marginalised identity.

It’s a luxury the average Indian queer can ill afford. Liberal democracy offers few rights to minorities, and none to those who remain unnamed and therefore invisible. Blame it on globalisation or do-gooding foreign NGOs, dawdling in the closet is not a viable option in the long run. But here’s the nice part: we’ll all get to pick the door that’s right for us one day.