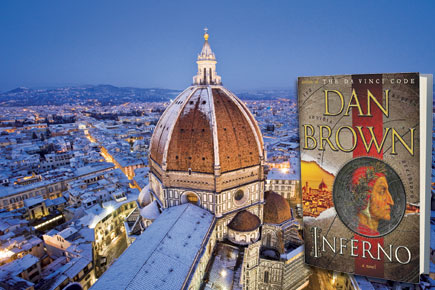 
Suddenly it struck me that it is not possible to write a successful book without the help of the word ‘suddenly’. I realised this while reading Dan Brown’s Inferno, which has over 150 suddenlys (and just eleven suddens). And then, it struck me that ‘and then’ too is important. There are over 120 and-thens. There is much to learn from Dan Brown’s craft.

Convey the obvious in italics.

In Inferno, after the fleeing protagonist runs out of a building into an alley, he says, I’m outside. After being shot at as he flees in a taxi, he says, Someone is trying to kill me? After an associate returns to her flat, he says, She’s back.

Another important lesson in the book is that a writer has to be proud of his prose even if bastard critics have said hurtful things about the language of his previous books. In fact, so supremely confident is Brown that a character in Inferno describes a nine-minute recorded soliloquy of the villain, who is wearing ‘a beak-nosed mask’ as a speech ‘that hovered somewhere between genius and madness’. The speech is also described as ‘classical chorus’ and ‘elaborate language’. Now, having described a piece of soliloquy in this manner, most writers will be reluctant to share its actual content. But then Brown is no ordinary writer. He reveals the soliloquy that ‘hovered between genius and madness’ not merely in Italics but in bold letters:

‘Wretched misery. Torturous woe. This is the landscape of tomorrow… This is what awaits. As the future hurls herself toward us, fueled by the unyielding mathematics of Malthus, we teeter above the first ring of hell…’

And then, the minor character who thought this speech ‘hovered between…’ searches the internet to figure out who Malthus is, thereby cleverly introducing the reader to ‘a prominent nineteenth-century English mathematician and demographist’. The character even reads an excerpt from Malthus’ An Essay on the Principle of Population. What happens after he reads the excerpt is something Malthus would have loved:

‘With his heart pounding, Knowlton glanced back at the paused image of the beak-nosed shadow.

The greatness of Brown is that he knows most of his readers are probably very dumb. So it is not just Malthus he graciously introduces, he also explains what a blurb is: ‘…one of those single line endorsements from a powerful individual, designed to make others want to buy your work.’ This description of a blurb is issued by a Harvard professor in the 2,000-seat lecture hall of an academy of sciences in Vienna. Brown also introduces Venice for our benefit: ‘…a unique Italian water-world city made up of hundreds of interconnected lagoons…’

What readers truly hope for in fiction is that it is not. Brown, of course, knows this. And he wants his readers to believe that except for the plot and live characters, everything else is true. As in the case of some of his previous works, before Inferno begins, he tells the reader, ‘Fact: All artwork, literature, science and historical references in this novel are real.’ Yet, Brown knows that research is overrated. How is anyone going to find out if he has misquoted the theoretical physicist Robert Oppenheimer? For instance:

“Okay…I guess that beats ‘I am Vishnu, destroyer of worlds.’”

The young woman had just quoted Robert Oppenheimer at the moment he tested the first atomic bomb.’

Robert Oppenheimer said no such thing. What he said was that when he recalled the detonation of the atomic bomb it reminded him of the words from the Bhagavad Gita, which in his own translation from Sanskrit were, ‘Now I am become Death, the destroyer of worlds.’

The Robert Langdon series, of which Inferno is the fourth book, attempts to convince the readers that the world is filled with cryptic clues left behind by secret organisations that lead to startling messages. I am already beginning to see the rudiments of these clues here and there. For instance, I have discovered that an anagram of Wonderbra is Read Brown.