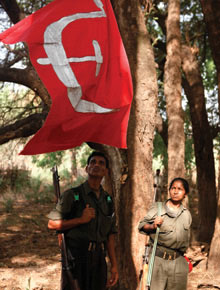 
Denial continues to be a disease. Cornered by outraged public opinion, the Government and public officials are playing ostrich

Last month I received an invitation from the World Economic Forum (WEF) to speak at their 2010 edition of the India Economic Summit in New Delhi. I won’t be coy: it felt good. The subject, ‘Securing Stability and Prosperity: The Maoist Challenge’ is relevant. The subtext, ‘How can a political solution be achieved with the support of economic development?’ adopted a pragmatic tone. My co-invitees were Palaniappan Chidambaram, Minister of Home Affairs, Shiv Shankar Menon, National Security Advisor, and Naveen Patnaik, Chief Minister of Odisha.

Impressed with WEF’s chutzpah and hopeful that the Government would see this as an opportunity to clear the air in front of several hundred local and global CEOs, analysts and media people, I accepted.
However, as 14 November neared, I found no mention of the session on the conference website. A query brought a diplomatic reply from a senior WEF official: “It appears this topic is something which creates difficulties to find speakers for.” But they were “very much planning” the session. I arrived, registered, and was then told WEF had “failed” to “arrange the session”.

That the session died is indicative of several things:

One is clearly the ostrich-like mentality of India’s leadership: play it down and a problem will disappear. The second is the persistent reluctance of the Government to discuss what Prime Minister Manmohan Singh has since 2006 tagged more than once as India’s “greatest internal security threat” (He has now stopped, perhaps realising that he had done too good a job of advertising Maoist rebels).
Officials may also have been wary of being queried about the embarrassment that several scandals—the Delhi Commonwealth Games, Adarsh Housing Society in Mumbai, allegations of wrongdoing in allotting 2G spectrum for telecommunications—have brought and dented the credibility of the Congress-led United Progressive Alliance Government. Hearing a harried, almost belligerent Finance Minister Pranab Mukherjee boast of future economic growth of 9 per cent a year at the opening session on 13 November, and scuttle before the media could skewer him over 2G, I saw yet another example of how deeply defensive the UPA had become, as entire battalions of sprightly skeletons leapt out of closets.

In the case of Patnaik—indeed, any public official from Odisha or Jharkhand, Chhattisgarh and West Bengal, affected by Maoist rebellion and huge scandals in land acquisition for both stalled and ongoing mining, metals, power and manufacturing projects—it indicates a reluctance to offer an explanation or a solution. Such states, currently ruled mostly by political opponents of the Congress, are engaged in propaganda and aggressive PR to turn the tide of media and public opinion their way. Attending gatherings such as the India Economic Summit may have led to embarrassing moments. They might as well have gone out to, say, Dantewada or Kalinganagar or Jajpur and yelled: “Come, we shall help threaten, beat, kill and displace more forest dwellers and farmers to make way for your businesses.”

But denial continues to be a disease. Cornered by outraged public opinion, the Government and public officials, and businesses nurtured by them, are increasingly driven to address gatherings they can control. This is reminiscent of the days before 1991—the year India was compelled by debt and deficit to initiate economic liberalisation. Almost overnight, pompous ministers and bureaucrats began to flirt with the notion that information and open communication are elements of a democratic republic.

That spirit of relative openness is once again quite compromised. And it comes with the most ironical of twists. There continue to be stunning disabilities—as shown by poverty, poor healthcare, bad governance, blinding corruption and stretched infrastructure. But India can justifiably claim remarkable progress in creating better livelihoods and lives for several hundred million who would otherwise have remained hobbled by aspects of a Command Economy born of Command Politics.

India’s schizophrenia of inequity is precisely on account of this. The world is increasingly accepting it. We’re-trying-to-reduce-the-bad is today India’s creditworthy economy, its export. To discuss the Maoist rebellion, which mirrors the failures of India, would have offered a welcome public opportunity for a reality check and some policy reflection.