How the Punjab Police Invented a Terror Outfit

After two deaths, tainted reputations and a final acquittal, a court awards Rs 10 lakh in compensation 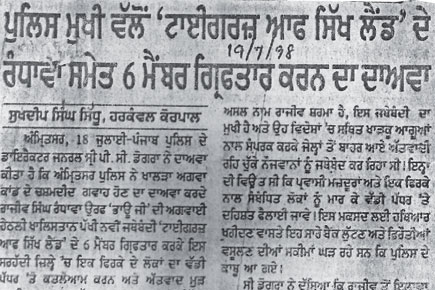 
On 18 July 1998, PC Dogra, who was Punjab’s Director General of Police at the time, held a press conference. Since the end of 1993, bar the assassination of Beant Singh, the state had witnessed no terror activity. Dogra’s stunning claim, as reported by The Tribune, was that ‘with the timely exposure of newly formed terrorist outfit “Tigers of Sikh Land” raised by “terrorists” belonging to the erstwhile “Khalistan National Army”, the Amritsar police has foiled a “highly sinister plan to spread terror, communal tension and other devastating acts intended against persons in key positions, vital installations and sensitive places”.’ UNI reported that Dogra had also claimed that this was “the first attempt since the return of peace in the state to reorganise unemployed urban youth for carrying out subversive activities with the active support of militants based in Pakistan and other countries”.

Those arrested included Rajiv Randhawa, Rachpal Singh, Akaljit Singh, Upkar Singh, Padarath Singh and Bhupinder Singh. Even then the claim was greeted with considerable scepticism. No one had heard of a terror outfit by the name of `Tigers of Sikh Land’. It did not help that the timing was suspect, Dogra was in the midst of a six-month extension after his date of retirement, and he was making a case for another six-month extension on the ground that Punjab needed his experience in curbing terror to ensure peace in the state. Moreover, one of the accused in the case, the so-called lynchpin Rajiv Randhawa, was one of the main witnesses in a 1995 case involving the abduction and death of prominent human rights activist Jaswant Singh Khalra. 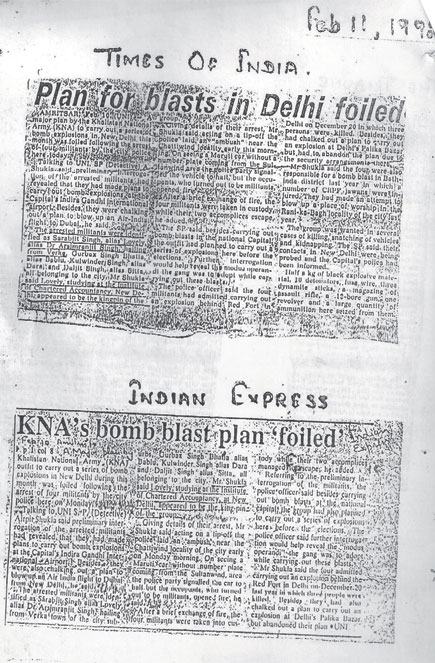 And even that was not all. A week after Dogra’s press conference, The Times of India reported this from Amritsar: ‘The city police have arrested one more member of the newly-formed Tigers Of Sikh Land militant organisation, raising the total number of arrests to seven. Border Range DIG, Samant Goyal, told reporters that Sarabjit Singh, the lone absconding member of the organisation, had adopted a fake name, Dr Harsimranjit Singh. He had been earlier involved in militant activities.’ Well, as for this earlier militant activity, Sarabjit had been arrested in February 1992 after a so-called ‘encounter’. At the time, Amritsar’s SP (Detective) Arpit Shukla held a press conference alleging that Sarabjit Singh, among others, was behind a series of bomb blasts in Delhi in 1991, including those at the Red Fort parking lot. But no case was ever registered against Sarabjit for the Delhi blasts, and the encounter that led to his arrest seemed staged.

The circumstances were strange enough even for the largely toothless Punjab State Human Rights Commission to order an enquiry by ADGP AP Bhatnagar, who was attached to the Commission. It was at this stage that I, as an Indian Express reporter based in Punjab, started following the story. One of the accused, Rachpal Singh, was a first-year journalism student who happened to be with Rajiv Randhawa when the latter was arrested. Rachpal was dragged into the case with almost no evidence against him.

Thanks to my then resident editor Kanwar Sandhu, I managed to get Rachpal employed as a journalist in the newspaper’s Ludhiana city supplement. He turned out to be an outstanding reporter of unimpeachable integrity in a state where almost everything was up for sale. The decision did not prove to be an embarrassment because Bhatnagar’s report was scathing, it recommended the quashing of the original FIR and the registration of a case against the investigating officers, to be probed by the CBI. The Commission passed an order endorsing the recommendations of the report.

It would come as a surprise only to people who tend to see the problems of Punjab in simplistic terms that the then Akali-BJP state government led by Parkash Singh Badal refused to implement the order, and the state Human Rights Commission had to approach the High Court to have it implemented. This case is still pending, but despite a stay granted by the High Court, proceedings in the trial court started after the Akali government presented the challan.

The physical toll taken by the constant threat of arrest and public branding as a ‘terrorist’ is difficult to imagine or describe. Rachpal and the others attended over 90 hearings, arrest warrants were issued twice, and he was even arrested once. I saw Rachpal slowly descend into depression, finally sinking into a long illness that confined him to his bed and led to his death. Another accused, Akaljit, also died in similar fashion with his wife alleging it was the case that had taken a toll.

In 2007, Sarabjit Singh, who had been first arrested in 1992 by the Punjab Police, was acquitted by the trial court, which held that the irresistible conclusion that could be drawn was that no encounter, as alleged by the prosecution, ever took place. A year later, Sarabjit and the others were acquitted in the 1998 case as well.

Soon after, Sarabjit approached the civil court in Amritsar with a claim for damages against the state of Punjab, the DGP and the SSP of Amritsar. In a judgment pronounced on 15 January 2013, the court noted, ‘The evidence led on the record would prove irresistibly that a Saviour organ of the State meant to protect the rights of the people has transgressed its powers in a most lethal way to the detriment of the most enshrined Fundamental Right of Constitution of India, i.e, Right to life and liberty…’

‘It is highly unimaginable even to think in the wildest of dreams in the social and democratic set up that an act of false implication would be at the instance of the police, and that too [of] allegations against a person [of being] a terrorist, a dacoit, involved in anti-national activities. What to speak of being sensitive to the plight of common citizens of the State, the local police acted in the most callous and pathetic way… Now, such [a] situation prevailing in the criminal justice system, where the police is acting in a callous, indifferent, autocratic, unconstitutional, arbitrary way, throwing fundamental rights to the winds, caring little about the directions of constitutional organs of the State, would be nothing short of anarchy and lawlessness.’

The court went on to say that ‘the suit of the plaintiff, is hereby decreed for recovery of Rs 10,00,000 only and the defendants are directed to make the payment within period of three months from the date of this decree, failing which, the plaintiff would be entitled to recover the same alongwith interest @ 6 % p.a. till its realisation. The defendants are at liberty to recover the decretal amount from the pockets of the erring police officials who were part of the whole episode of false implication, specially the investigating officers of the two cases.