…and the eternal ‘does size matter?’ debate 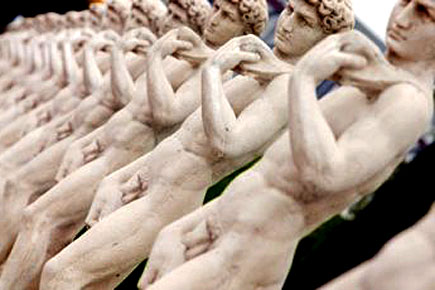 …and the eternal ‘does size matter?’ debate

Two double drinks and a few drags of some very expensive weed later, the official stand of ‘It’s just another organ’ gives way to the real deals. Those (penis?) heads tell stories of performance anxiety, rating systems and the insecurity of not coming up to scratch.

A former lover told me that getting intimate with me was one of the most daunting prospects of 2010 for him. Considering he’s one of the fittest men I’ve ever laid eyes on, coupled with the fact that my midriff and I have several unresolved issues, I greeted his announcement with the grace of a chattering monkey. “You go through more than your fair share of men in a year. What could I have done that some guy hadn’t already shown you?” I can’t deny the logic there. “You joke that it’s got a mind of its own. We know it to be true. It’s like living with an independent person within your own body. One that can decide to stand up in the middle of a meeting or go to sleep during a performance review!” raged a fellow capoerista.

I have to admit, I’ve often caught myself thinking thoughts that range from unkind to positively lascivious about the men straining behind their fitted capoeira pants. “You say size doesn’t matter, and we say we believe you. But we both know we’re lying. Men have types. Some of us like lean bodies with small racks, others are all about curvaceous bodies with plenty of boob, but is there a girl with ‘small penises’ as her type?” said a friend who clearly has a bone to pick with the measuring tape.

Last night, while the dude snored away in blessed sleep, my roving gaze settled on his dick. It lay there, blissfully peaceful, tired, spent, resting on its thatch of curly black hair and lovingly cupped by its owner protectively. It’s a scene that I’ve seen played out multiple times in my bedroom. After the polite cuddling that most men consider their duty after a round of explosive sex (or so I like to believe), most men end up settling in a universal posture before drifting off to sleep—curled up on their side with their penises safely tucked between their hands. Unable to sleep, I took his matter into my hand. The second my fingers brushed his disco stick, he was awake and alert. He opened one eye, saw it was just me, quickly shut it again, planted a kiss on my head and promptly went back to sleep. His penis was in safe hands.

On the whole, I think I’m very lucky to be born a woman. As a woman, I can snap my fingers and pointedly ask a man to stop talking to my chest. Plus I’ll get patted on the back and offered sympathetic “poor yous” and offended “me toos”. I can stare at a girl’s boobs and tell her how jealous I am of her generous proportions without getting ostracised from polite company. Men aren’t quite as fortunate. The only number men are at liberty to discuss is the highly euphemistic count of the notches on their bedposts. Because anything else would be creepy.

The penis is a taboo area in men’s relationships. The only external reference being surreptitious peeks in locker rooms or washrooms of restaurants. I’m thankful for my internal reproductive plumbing. Because the only other option is going through life one cold shower at a time. And ladies, if you still think you got the raw end of the deal, know this: men are one gene away from growing penile spines like their primate counterparts!