Good to be Home 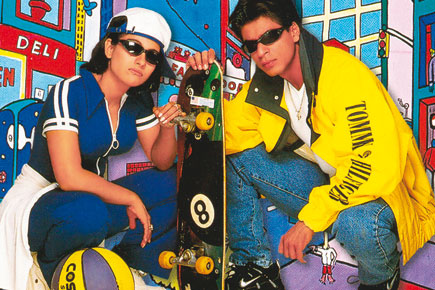 
It was 14 years ago, but the scene is still crystal clear in my mind—the exact moment when I realised that Bollywood had bid goodbye to Bharat. In December 1997, I walked onto floor number two in Mumbai’s Mehboob Studio, where, undaunted by the paan-stained, mildewed surroundings, Karan Johar had carefully constructed a slice of America. The walls were deep lilac and the floors multi-coloured. There were bright yellow lockers and a Pepsi vending machine in a corner. It looked like a scene out of Beverly Hills 90210, except that the actor coming down the corridor, on a skateboard no less was Shah Rukh Khan.

Kuch Kuch Hota Hai set the Western tone for Hindi cinema for the next decade. Rangeela, DDLJ and Dil To Pagal Hai had introduced hip styling, foreign locations and urban gloss, but when Shah Rukh and Kajol appeared onscreen with designer labels emblazoned across their chests in KKHH, the trickle turned into a tsunami. For much of the following decade—the Oscar-nominated Lagaan notwithstanding—villages and even small-town India were pushed to the periphery.  There was a total domination of the urban and phoren milieu.

Narratives were necessarily set overseas—I remember asking Karan why Kabhi Alvida Naa Kehna had to be based in New York and he said that he couldn’t figure out how and where his adulterous protagonists would carry out their affair in India. Coffee shops just weren’t glamorous enough. It didn’t hurt that NRIs and local urban viewers flocked to these travelogue fantasies. I recall writer Sachin Bhaumick saying, “Producers tell us: ‘Overseas mein dhoti-kurta bikta nahin hai  (Indian clothes do not sell overseas)’.” But for most viewers in small towns and villages, the films became so alien and incomprehensible that they turned to Bhojpuri cinema, which saw unprecedented growth—a 2007 Business Standard article pegged the size of the Bhojpuri industry at Rs 100 crore.

But in Bollywood, A-list films and stars stuck to the formula originated by Yash Raj Films and Dharma Productions. I was told that at one point, so many films were being shot in Switzerland simultaneously that units were intruding into each other’s camera angles. I think the first sign that the times were changing was the monster success of Ghajini.  Films with a more homegrown sensibility such as Rang De Basanti and Lage Raho Munna Bhai were hits, but the Rs 200 crore box office record of Ghajini had as much impact as Aamir Khan’s fist in the film. It flattened out the competition.

Ghajini wasn’t a rural story, but it was a throwback to what a Hindi film used to be: a three-hour extravaganza of romance, comedy, drama, action and dialogue-baazi. The hero had cropped hair, serious muscles and tattoos all over his body.  He was a brutal killing machine, miles removed from the sensitive metrosexuals (usually named Rahul or Raj) we had seen till then. Wanted, which had Salman Khan playing a super cool tapori who is described by his friends as ‘Rocky ka baap, Terminator ka nana, the last action hero,’ took the masala movie further. And last year, Dabangg, with the furiously fabulous UP hero Chulbul Pandey, confirmed that Western gloss and NRI characters in candy-floss rom-coms were effete and seriously old school. Bharat was back.

And not just in bone-crunching action movies. The success of Peepli Live, a rural black comedy; Udaan, a coming-of-age film set in Jamshedpur; Love, Sex aur Dhokha, a deeply unsettling exposé of sexual mores in contemporary India; Do Dooni Chaar, a slice-of-life family drama; and especially Band Baja Baaraat, a Janakpuri-based rom-com, proved that viewers, perhaps weary after a decade of borrowed, synthetic syntaxes, were starting to prefer desi-cool. Directors are now working overtime to rediscover the country—even Karan’s new film Student of the Year, is set in India.

I hope that the return-to-roots throws up narratives that are authentic and visceral—films that feel lived instead of imagined. It feels good to be home.