Who is to blame if the DNA of Geeta’s parents do not match? 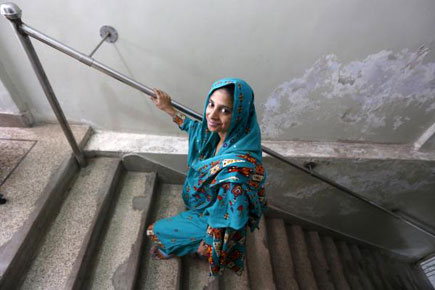 One of the first things that Geeta did after coming from Pakistan to India was not to recognise her parents. This could have been predicted. When she was found in the Samjhauta Express at Lahore railway station, Geeta was 7 or 9 or 11 years old depending on which media report you believe. Now she is 23 and memory over such a long period, even among adults, is a tricky thing.

It is too late now for answers to questions that should have been asked before she stepped into India. For instance, what is the probability of locating her parents in such a vast country without any record? More than one came forward after the Indian Government announced that it was beginning a search and there is no reason why the couple they have selected for the moment has any greater probability of being the real parents.

A DNA test should get to the truth but shouldn’t it have been done before she came here? What if the test says those are not her parents? In Pakistan, she is being looked after by a foundation and has a home, a community and security. In India, all she has is the Government and, once the media loses interest in the story, so will the Government. The only time we will hear of her in the possible future will be stories of how the Government is ignoring her. She will be notings on a file.

It is extraordinary how casual the two governments were in sending her over to India and you can blame it squarely on Salman Khan. Bajrangi Bhaijaan is one of the biggest blockbusters ever made in India but it is a movie, a concocted fantasy designed with the emotional manipulation in which Bollywood excels. There is nothing real about it. But Geeta is a real person. Ever since the story started gaining momentum that here was life imitating art, then everything about Geeta’s circumstances were made to fit into Bajrangi Bhaijaan’s plot—a collusion to see this story too pale out into an ebullient movie climax.

We must all hope that it happens, but the odds are against it, given the surreal directions available. For instance, it is said in newspaper reports that Geeta used to point to the states of Andhra Pradesh and Telangana on the Indian map. Consider the absurdity of giving something like this credence—that seven-year-olds should be aware of Indian geography, the position of states in it and then be able to point it out later. But it is based on such little bits and pieces–she alludes to the number 193 which could be her address, worships Hindu gods and does the namaaz— that Geeta’s story has been crafted in the public imagination. There are legitimate reasons why Geeta herself would want to be here, like the human yearning to find home and roots. Beyond that, however, there is the culpability of the media and Bollywood. From a regular existence, here she was talking to Salman Khan and being teased and cajoled by him on live television—a real fairy tale but one that lasts only till the movie needs to be promoted. The best outcome now is for the DNA test to come positive. Geeta could then settle to life, as all of us know it. She deserves that certainly.