India’s gift to me is that she doesn’t get in the way of my freedom to be, she allows me the space to show respect voluntarily. 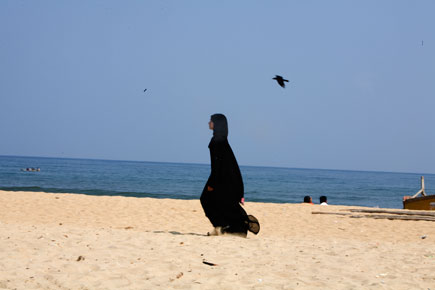 India’s gift to me is that she doesn’t get in the way of my freedom to be, she allows me the space to show respect voluntarily.


We have never been close, India and I. She is like a famous ancestor, unavoidably present, hanging garlanded from walls. I know I am of her, from her, yet I have never felt like snuggling her. When Ramachandra Guha or Amartya Sen speak of the “idea of India” it always sounds to me like an old filmi tune—vibrant in my dreams, but a smoky wisp in broad daylight. India may seem ethereal, but my inheritance from her feels a bit more real.

As a student in Calcutta and Kanpur, I was too busy solving partial differential equations. India was never on the radar except as brief cameos every January and August. I first read Discovery of India on a semester break as a graduate student in the US and was relieved to notice that even Nehru felt compelled to “discover” India only after having spent significant time away from her.

I had friends in graduate school from Israel, Turkey and Latin America who were paid handsomely by their governments to study in the US, and would have to return to compulsory military service. This being 1989-90, I had friends from China who had fled their regime post-Tiananmen. There were no such currents between India and me. India did not push me, nor did she pull me. I was free to drift, free to anchor. I was, and still am, free to be. This is the essence of my inheritance. I am cerebrally aware of what makes such freedom possible and have a vague notion of the price. But I would be lying if I said that this awareness informs my day-to-day existence. The freedom to be, though, certainly does.

I am free to yell at inept policemen, unlike my friends in Dhaka. I am free to spray a pristine white wall with radiant paan spittle; I would probably be hanged in Singapore for that. I am free to walk into a diagnostic clinic, get a brain scan, walk out with the report and make a paper airplane out of it; I could never do that in the US. I am free to get sick inhaling noxious fumes while transport unions, with support from the state government, openly flout a high court order banning polluting vehicles. I am equally free to file a PIL in the same court and bring the entire nexus to its knees. I am free to puff up when reading about Arihant, our first entirely indigenous nuclear submarine. I am also free to fade away on the street outside a state hospital as thousands pass me by. The list goes on. India never gets in the way.

All this does have something to do with the anthem-at-the-movies incident: it was as though my famous but gauzy ancestor had lifted her sari to expose her feet, urging me to touch them. It was shockingly out of character. She has always been hands-off. Her gift to me is the freedom to show respect voluntarily.

Her gift to me is my freedom to not stand.

Rimli Sengupta
Rimli Sengupta is a willing refugee from engineering academia who has recently taken to writing. She writes in both Bengali and English.