On Oscar night, I want to see Birdman flying away with all the statuettes he longed for while he was fighting his demons backstage 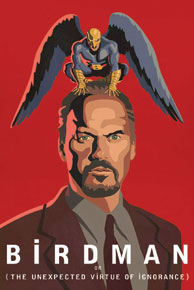 The Oscars are two days away as I write this, and, if you haven’t already noticed, the usual suspects are out there in full strength to claim the golden statuette. Can the Academy really resist portrayals of the extraordinary spirit of being human, or the movie version of sick lit, of the poignancy of endurance in physical adversity, or the mise-en-scène of what Susan Sontag would have called ‘illness as a metaphor’? So there is The Theory of Everything in which Eddie Redmayne plays a Stephen Hawking refusing to give in to the intercellular encroachment of a motor neurone disease called Amyotrophic Lateral Sclerosis. If the Oscar history is any guide—the blind Al Pacino in Scent of a Woman, Daniel Day-Lewis with cerebral palsy in My Left Foot, the autistic Dustin Hoffman in Rain Man—Redmayne is a predictable Best Actor choice. And Julianne Moore, one of the most elegant leading ladies of Hollywood, as a linguist suffering from Alzheimer’s in Still Alice, could be Redmayne’s counterpart on Oscar night.

My candidate, though, is not The Theory of Everything, or Richard Linklater’s growing up saga Boyhood, or for that matter, Wes Anderson’s painted beauty, The Grand Budapest Hotel. My vote is for Alejandro González Iñárritu’s subversive classic Birdman (or The Unexpected Virtue of Ignorance.) I watched it at my favourite cinema in London, Curzon Soho, with a glass of prosecco that, in retrospect, went down well with the drumbeats of Antonio Sánchez that began to echo, with a frenetic rhythm, in the hall and in my mind from the moment the credit lines rolled. The story of a burnt-out superhero, a celebrity trapped in his own legend now trying to rediscover himself by adapting for Broadway Raymond Carver’s What We Talk About When We Talk About Love, at its most obvious level, could be seen as a joke on Hollywood, a joke with a touch of magic realism. The role of the fading star, Riggan Thomson, played to comic-bathetic perfection by Michael Keaton, Hollywood’s original Batman, lends itself to self-parody. He can levitate. He can fly over Manhattan. And he has telekinetic powers. In between, when his existential anxiety peaks, his inner Birdman breaks out and tells him to abandon the vanities of an arty resurrection and return to the rewards of blockbusters. In an industry that mythicises comic-book superheroism, and where the derangement of the delusional celebrity is an off-screen subplot, Thomson could be Iñárritu’s weapon of mass derision.

Iñárritu is an outsider, a Latin American in Hollywood, and his laughter at the generic fantasy from within is apparent throughout the film. Keaton may soar, literally, as Thomson, but, in varying degrees, everyone who shares the stage he inhabits is crazy. The method actor Thomson ropes in, played with manic energy by Edward Norton, is either trying to have sex onstage or busy seducing Thomson’s daughter, who has just returned from rehab. There is a scene where she lectures her father, a celebrity without a Twitter account, into submission, makes him aware of his redundancy, his worthlessness. And there is the theatre critic who threatens to write him off without even seeing the preview. As the opening night approaches, the performer and the performance becomes one big, black, comic idea of being alive in a bubble—a fantastic bubble. When Thomson soars over the city, and when Birdman, an exaggerated version of Keaton’s Batman, becomes his conscience controller, we know that escape is surreal, and its intimations are brought to you by phantoms of the past.

Thomson is more than a man caught between parody and comedy. At the most elemental level, he is a tragic hero, not Greek but the less majestic type. The sheer banality of his existence is brought out in one of modern cinema’s most original shots: Thomson, locked out of his theatre’s backdoor, walking naked through Times Square. That is the journey of a man who has nothing else to lose but his place in a script that is turning out to be stranger than his past selves. This is perhaps his only appearance we watch—not counting his flights of imagination—outside the theatre during the entire film. Once out of his labyrinth, which is what the theatre is in its design, he is left with nothing to hide his fears. The structural flow of the movie is achieved by the masterful cinematography of Emmanuel Lubezki, who has made the whole film look like one seamless shot. You just can’t feel the cut. This brilliant collaboration between the lens and the mind gives Birdman a rare real-life movement, which is further intensified by the jazz drummer’s background score. In the end, in a world where the thin line between fame and fantasy is obliterated by the anxieties and urges of the lonely performer, realism is more than a loaded pistol onstage. It is written in the eyes of Emma Stone, who plays Thomson’s daughter, looking out of the window. There is calm. There is freedom. There is even a rave review in The New York Times, titled ‘The Unexpected Virtue of Ignorance’.

On Oscar night, I want to see Birdman flying away with all the statuettes he longed for while he was fighting his demons backstage.