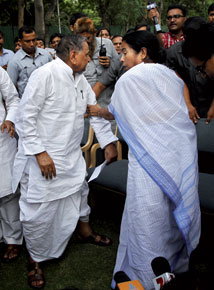 
The idea of a third front has got a boost after the JD-U snapped ties with the BJP. Actually, in the context of the 2014 Lok Sabha election, the idea of a third front was first mooted by Odisha Chief Minister Naveen Patnaik. It got the immediate support of West Bengal Chief Minister Mamata Banerjee. But Mamata’s vocabulary was slightly different. She talked of a new all-India federal party. Let us examine these by turn.

Federal Party: It must be admitted that this idea is good. A front can only be a temporary phenomenon. Its purpose would be transitory. But a federal party would have a well-defined structure for the long term. Like any other political party, it will have to frame its own constitution, rules on membership and office bearers, and state its aims, policies and agenda. It must be remembered that India’s Constitution has no mention of the term ‘federal’. Its first article says that ‘India that is Bharat shall be a union of States’, not ‘federation’, and there is palpable difference between the two.

However, I am personally not happy about the wording of the article; it assumes that the states form a fundamental unity and the Country or State of India is just their union. I would prefer the following: ‘India that is Bharat is one country, with one people, with one culture—that is, one value-system—and therefore one Nation.’ Under this, the states would be administrative units. There is nothing extraordinary in such an arrangement. After Independence we have reorganised the states several times to suit administrative purposes. As it is, the different states are likely to see themselves as basic units of a federal structure. This understanding would naturally give legitimacy to a federal party.

As of now, there are two all-India political parties: the Congress and BJP. But neither has all-India strength. In many states, they have to play second fiddle. In Punjab, the dominant party is the Akali Dal, with the BJP as its junior partner. In West Bengal and J&K, the Congress plays the junior part. In Tamil Nadu, both the Congress and BJP are almost non-existent. In UP, Bihar and Odisha, both parties have been reduced to minor political groups. Therefore, it is natural for the states to stake their claim to the seat of power at the Centre.

Third Front: It is obvious that almost all state-level parties are limited to their own state: the TMC to West Bengal, the DMK and AIADMK to Tamil Nadu, the BJD to Odisha, the TDP to Andhra, the Akali Dal to Punjab, and so on. Some of these are ruling parties in their states, while others like the TDP were so in the past. None can dream of achieving power at the Centre on its own. But it is natural for them to aspire to India’s top position. For this, they know they have to come together. But it is far easier to form a third front than a federal party.

Naturally, this third front will consist of parties that are opposed to the Congress or BJP (or both). But forming a third front is also not easy. Some of the parties that are against the Congress and BJP are more inimical to other non-Congress and non-BJP parties in their states. If the SP of Mulayam Singh joins the third front, the BSP of Mayawati will be out. If the DMK is in, the AIADMK will not touch it. If the TMC is a member, the Left parties will stay away.

As for the JD-U, the party got a favourable overture from the Congress after its exit from the NDA, but its response was not encouraging and it has since spoken of a third front as well.

Given this complex picture, it will be interesting to note how these state-parties come together. It is easy to understand their ambition. Their calculation is also patent. They expect that the Congress on its own will not garner more than 140 seats in the next Lok Sabha; the BJP alone will not cross 160. Even if the NDA enters the electoral arena as an alliance, its combined tally will not go beyond 175. In a house of 543 members, that would mean 228 seats for other candidates: a number that may mean a third front emerges as the largest single combination. But even then, the front will still need some 50 seats more. So the third front will have to seek the support either of the Congress or the BJP, and each would be eager to offer outside support to deprive the other of a power base.

But there is no guarantee that a third front government will last a full term. It would likely meet the same fate as the Deve Gowda or IK Gujral governments, from which the Congress withdrew support, or the VP Singh government, from which the BJP pulled out.

It is an amusing scenario to consider. It is also interesting to wonder what the non-Congress, non-BJP parties that are not in the third front will do: form a fourth front?