In a relationship without gender norms, everything is up for discussion 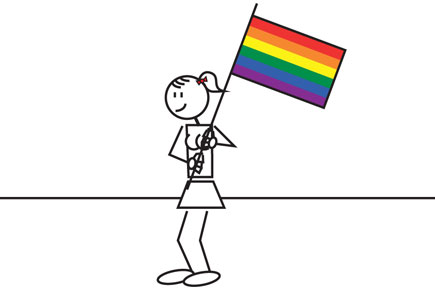 In a relationship without gender norms, everything is up for discussion

Have you ever been part of a conversation during which you’ve wondered if the others were dropped on their heads as babies? I have. Every time an allegedly educated person suggests that decriminalising homosexuality will somehow make paedophilia acceptable at some future date, I have to physically restrain myself from leaning over and knocking on their heads to check if the portions responsible for logical thinking and reasoning have gone soft or are rotting.

In a country where schools are still tiredly explaining to parents that sex education will not fill their kids’ heads with pornographic thoughts, arguing that homosexuality needs to stay outlawed because ‘how on earth will we explain it to the kids?’ is pretty idiotic. Not to mention phony.

Much has been said about Section 377 of late—furious editorials scribbled, heart-warming photographs of equal rights supporters posted, embarrassing tweets retweeted. Amul hoardings have admonished us from our skylines, the legal system has been ridiculed and our skewed morality mocked ad nauseam. So what can I possibly add? Does the LGBTQ community really need another champion?

To be honest, my motive is purely selfish. I’m gunning for gay marriage because I love the idea of marriage without gender. I want a union so devoid of gendered assumptions that if a stranger read a pronoun-less account of our life, s/he wouldn’t know who the husband or wife is.

Theoretically, the boyfriend and I agree we both want this. But there are plenty of instances when we falter and slip into the roles we’ve been raised to play. And every time we slip up, we look toward two friends to nudge us back on track—a lovely gay couple in their late 30s. So here we are: a (mostly) straight woman and an undoubtedly straight man modelling our very straight relationship on a gay one. They’ve taught us that when the rules don’t apply to your situation, you get to make your own.

Since their relationship isn’t bogged down by the baggage of heteronormativity, everything is up for discussion. Every decision—from everyday things like laundry, cooking and who pays the bills to life-altering financial and career choices—is taken by honest and careful assessment of what both partners want their life to look like five, ten and 20 years from now. Decisions are made depending on how each partner feels about things instead of arbitrary gender rules.

Sometimes, knowing your own mind is tough in a heterosexual relationship. I often find myself wondering whether I do certain things because they’re not expected of me or because they actually make sense. Take cooking for example. In my family, girls learn how to cook. I, of course, decided that I hated cooking. From the time I was 16 till I turned 21, every summer vacation, our chef diligently tried to inculcate the art of roti-making in me. After two months and countless cardboard-like rotis, Dad would angrily order me out of the kitchen. Until Grandma K shoved me back the next year. And the next.

This year, when the boyfriend and I started living together, we had to hire a cook because his work schedule doesn’t allow him to be free at meal times and my culinary skills are a threat to most digestive tracts. For the past few days, I’ve been keeping the vegetables chopped for our cook so she can get home early and help her daughter prepare for her exams. I’ve found, to my surprise, that slicing tomatoes has a therapeutic effect on me. Shelling peas relaxes me and cleaning coriander makes me believe I may actually develop a green thumb someday. It makes me wonder whether I actually hated cooking or the idea that a girl must cook…

I’ve realised that most straight relationships are about following rules or breaking them to prove a point. Being around gay couples has taught us that when the rules don’t apply to you, you get to experience the joy of making your own rules that apply only to the two of you. I want in on that fun. I want to organise my relationship like my gay, lesbian and of-indeterminate-sexual-orientation friends do. You’re unnatural if you don’t.