…and the India-South Africa Test series showed us why. 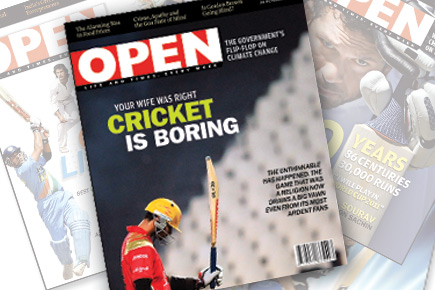 …and the India-South Africa Test series showed us why.


Some months ago, we carried a cover story titled ‘Cricket is Boring’. I even wrote a column saying I wouldn’t write on cricket again, because a numbing overdose of games meant that no one even kept track of who was winning, who was losing; victory and defeat had lost their place in the scheme of things. Okay, I take back my words. I apologise. I am back with the game.

I thank the Indian team for it, I thank South Africa for it, I thank Virender Sehwag and Hashim Amla for it. The fact is that the India-South Africa Test series gave enough evidence to anyone the least interested why the five-day format shall never die. What a series it was!

Has there ever been a series where a team lost by an innings and then came back to win the next match by an innings? And when was the last time that a player from the losing side got a Man of the Match award, and that too without any doubt that he should get it? And what is wrong with the man called Sachin Ramesh Tendulkar? When will he stop? When will he say that he has done enough? Clearly, there has never been a cricketer like him, even perhaps a man like him. Who could have ever imagined the feats that he has achieved, and who can imagine what more he will?

And Virender Sehwag. If character is key to cricket more than in any other sport, this happy-go-lucky streetfighter brings a new definition to the term. Life for Sehwag, one suspects, is rather a simple challenge. He sees the ball coming at him, he hits. In his mind, there is no purpose to a ball being bowled other than to be smacked. Who in the history of the game has ever said that he derives more joy from hitting fours and sixes than from centuries? Which madman has ever promised that he will play a hundred Tests and then retire? Is this guy for real? A man with no subtext?

No subtext. Which was true of this Test series too. It was pure and simple fun. Both teams would have felt victorious, with legitimate reasons, with neither having any regrets. Isn’t that what the best of sports is about? Christopher Hitchens, in a recent column in Newsweek, may feel that sports brings out the worst in the human beast, but for once, he is sorely off the mark. Of course, we wanted India to win, but which true lover of cricket did not enjoy Hashim Amla’s heroics against all odds?

In the 1996 Test series in England, during the Lord’s test, TV commentator Peter Roebuck said: “In the Tube today, there were a lot of people coming to see the match. And what all of them wanted was that Tendulkar should score a century and England should win.” Moments later, Tendulkar was caught in the slips by Graeme Hick. “There it goes,” lamented Roebuck. “I don’t think anyone has come to Lord’s today to watch Graeme Hick take a catch.” This is the spirit of sport, the joy of watching extraordinary people doing extraordinary stuff.

Of course, we missed Rahul Dravid. For 14 years, he has enchanted us and maddened us, and somehow always managed to be the bridesmaid, never the bride. Tendulkar has murdered the opposition with much more flair, and Ganguly has hit many more sixes. We have cursed Dravid for giving every bowler his due, a concept Sehwag missed out on in kindergarten. But it is safe to say that we would not have lost by an innings in Nagpur if Dravid had been around.

Few have given more to the Indian team and more selflessly than the man nicknamed Jammy. One suspects he is a thinking man, and one will perhaps never know why he gave up the captaincy, and one wishes he would think a bit less.