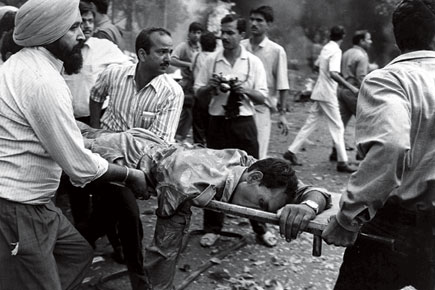 
In the span of less than a month, India’s Supreme Court, faced with the question of whether a death sentence should be commuted in case of an inordinately delayed decision on a clemency petition, has issued two contrasting judgments. This re-opens the debate over unexplained delays in hanging in particular and on the death penalty in general.

The 12 April judgment in Devender Pal Singh Bhullar’s case—in which the Court rejected the accused’s plea for commutation of his death sentence to a life term on the grounds of an inordinate delay by the President of India in turning down his mercy petition—was supposed to have closed the matter for other death row convicts who had made similar appeals in court. But on 1 May, the SC commuted Mahindra Nath Das’ sentence from death to life imprisonment, ruling that an unexplained delay in his execution justifies such a commutation.

In its Bhullar verdict of 12 April, the SC observed: ‘It is true that there was considerable delay in disposal of the petition filed by the petitioner, but, keeping in view the peculiar facts of the case, we are convinced that there is no valid ground to interfere with the ultimate decision taken by the President not to commute the sentence of death awarded to the petitioner into life imprisonment.’

In the case of Das, on 1 May, the bench noted: ‘In absence of any reasonable explanation by the respondents we are of the view that if the concerned officers had bestowed the necessary attention to the matter and devoted the time its urgency needed, we have no doubt that the entire process of consideration of the questions referred would have been completed within a reasonable period without leaving any yawning gap rightly described by the learned Additional Solicitor General as an “embarrassing gap”. There has, thus, been an avoidable delay, which is considerable in the totality of circumstances in the present case, for which the condemned prisoner is in no way responsible.’

In Bhullar’s case, the Court observed that the delay was partly on account of numerous petitions filed on his behalf by others—in effect, holding him obliquely responsible for it.

The bench of Justices GS Singhvi and SJ Mukhopadhaya also made a distinction between the murder committed by Das and the 1993 bomb blast of which Bhullar was accused of a conspiracy. ‘Such cases stand on an altogether different plane and cannot be compared with murders committed due to personal animosity or over property and personal disputes. The seriousness of the crimes committed by the terrorists can be gauged from the fact that many hundred innocent civilians and men in uniform have lost their lives. At times, their objective is to annihilate their rivals including the political opponents. They use bullets, bombs and other weapons of mass killing for achieving their perverted political and other goals or wage war against the State. While doing so, they do not show any respect for human lives. Before killing the victims, they do not think even for a second about the parents, wives, children and other near and dear ones of the victims. The families of those killed suffer the agony for their entire life, apart from financial and other losses. It is paradoxical that the people who do not show any mercy or compassion for others plead for mercy and project delay in disposal of the petition filed under Article 72 or 161 of the Constitution as a ground for commutation of the sentence of death. Many others join the bandwagon to espouse the cause of terrorists involved in gruesome killing and mass murder of innocent civilians and raise the bogey of human rights,’ said the bench in its judgment.

In doing so, the SC not only seeks to create a new category of death row convicts without citing any Constitutional basis for this distinction, but also seems to hold the view that the human rights of ‘terrorists’ differ from those of other criminals. India’s apex court, in effect creates a subcategory within the scope of the principle of ‘rarest of rare cases’ for capital punishment laid down by a higher, five-judge bench in the Bachan Singh vs State of Punjab case of 1980, a principle that makes the awarding of a death sentence an exception rather than the norm. In the Bachan Singh case, the apex court laid down the following: ‘A real and abiding concern for the dignity of human life postulates resistance to taking a life through law’s instrumentality. That ought not to be done save in the rarest of rare cases when the alternative option is unquestionably foreclosed.’

It can well be argued in the Bhullar case that the alternative option was not unquestionably foreclosed because the SC’s earlier verdict upholding his death sentence saw its presiding judge Justice MB Shah pass a dissenting judgment that acquitted Bhullar in 2002. ‘In this view of the matter, when rest of the accused who are named in the confessional statement are not convicted or tried, this would not be a fit case for convicting the appellant solely on the basis of so-called confessional statement recorded by the police officer. Finally, such type of confessional statement as recorded by the investigating officer cannot be the basis for awarding death sentence,’ pronounced Justice Shah in his dissenting judgment. In a judicial system that has resolved to use capital punishment only in exceptional cases of guilt, as the ‘rarest of rare’ principle holds, dissent by the presiding judge and a conviction based on a 2-1 judgment is a strong argument against Bhullar’s case being classified as one deserving of the death penalty.

Das’ sentence has been commuted on account of, one, the delayed decision of the President on his mercy petition; and two, the fact that the Government—while advising former President Pratibha Patil on that decision—had withheld from Patil her predecessor APJ Abdul Kalam’s views on the matter. Kalam had in a note said that Das’ case merits commutation. The Government, it said, did not share the note with Patil, denying her an opportunity to reach a conclusion based on what her predecessor had already decided. Therefore, the Court held on 1 May: ‘It is neither the pleaded case of the respondents nor any material has been produced before this Court to show that the Government of India had placed the file before the then President for review of the order recorded by him on 30.9.2005 or the President who finally decided the appellant’s petition on 8.5.2011 was requested to reconsider the decision of her predecessor. Therefore, it must be held that the President was not properly advised and assisted in the disposal of the petition filed by the appellant.’

The Ministry has, following this Court observation, issued a clarification that the entire file, including Kalam’s note, was put up for Patil to see.

Justice Shah, in a recent interview to The Hindu after the 12 April verdict, had this to say: “The normal procedure in death penalty cases is that when there is a dissenting judgment, it gets converted into life sentence…I don’t know why this was not followed in this case.”

Under Section 432(2) of the Criminal Procedure Code, the Government ‘may require’ the presiding judge to offer his opinion in determining clemency appeals. Bhullar’s wife has filed a review petition. Whether the Court will take into account the procedural lapse in his case is unclear at this juncture. But the contrast in the SC’s judgments on Bhullar and Das throws up new complications. In a country where judicial precedent effectively becomes law, the apex court may have created a problem instead of resolving one.