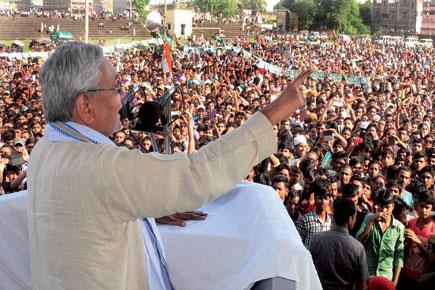 Every election is weighed against the two pillars of competence and vision. But not the Bihar election come November 5, when polling ends. The focus would be completely on the rivalry between the two personalities of Nitish Kumar and Narendra Modi.

At the onset of the election, it seemed that in Bihar people do not cast votes so much as they vote castes. At the end now, this perception is turning into a myth and an irony.

With only Kosi and Seemanchal remaining to go to polls–they account for 57 seats–the game is no longer being played just on caste   and has turned into a battle between two overarching and similar personalities.  It is like the national campaign of 2014 which also became personality-centric.

The acrimony between Modi and Nitish started during the 2014 general elections and it has again exploded. The electioneering, with every passing day, has become more acidic. While caste remains a major factor, voting is also focusing on merit, goodwill and charisma. It is not just about issues but a composite view of what people are taking away from these two towering personalities.

Nitish continues to enjoy the credibility of a successful chief minister, thus having an upper edge. Across all castes, he has a following  for the work that he did. Many voters are content with the development that Kumar brought in Bihar. He is also a favourite with the youth and women from all castes. During this election Nitish has deployed his political instincts on a campaign that didn’t spend too much money but was thoroughly visible. Bypassing hoardings, posters and advertisements in the vernacular me, his campaign hired mini trucks and cycles to pass the message. So meticulously has it been planned that Nitish can been seen in every village, town and city.

These are traits which won Modi the prime ministership last year. But here in Bihar he seems to be re-phrasing and repeating the same old lines, harping on the same sentiment. The thousands who attend a Modi rally are spectators, present for the spectacle of his presence. As soon as he starts speaking, people start to leave. Having witnessed him in Navada and later in Muzaffarpur, he seems to having trouble engaging the audience. Modi’s style to engage in the politics of bad mouthing rivals also has not been going well with people.

The election is still wide open and Bihar braces for a final round between Bitish and Modi. The stakes are high for both. If Modi loses Bihar, he loses his sheen as a pan Indian leader. If Nitish loses then it brings to question his future as Bihar’s most popular leader. November 8 will be a watershed moment.