Between the Poetic And the Visual

Arpita Singh’s work, irrespective of its theme and ambition, is touched by a deeply personal, almost mystical, truth. Broken phrases and stray words are strewn all over her images, to set up the context to which these may be anchored 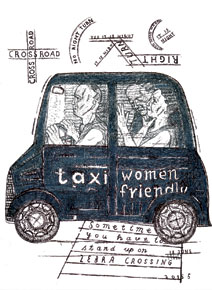 Earlier this year, I wrote a long profile of Arpita Singh in The Caravan magazine (‘An Accidental Artist’, March 2015), focusing on her evolution as an artist. A couple of months before this, in October 2014, Singh had been bestowed with the fellowship of the Lalit Kala Akademi, only the second woman to have been graced with this honour in the six decades since it was first instituted in 1955. Timed to the ceremony, a retrospective of her work, spanning several decades and in a range of media, was put together by the art critic and curator, Ella Dutta, at the Akademi’s gallery in New Delhi.

From paintings on canvas to watercolour on paper to works on textile, Singh’s artistic vocabulary is as richly polyphonic and complex as it is demanding. With Nilima Sheikh, Madhvi Parekh, Nasreen Mohamedi and a few others, she is one of the few women of her generation whose work has global recognition and resonance, though she is never quite spoken of in the same breath as her male contemporaries, for reasons that are best known to art historians, critics and collectors.

Singh’s work can be unapologetically obtuse, not so much in its outward appearance but more for what it leaves unsaid. It requires more than a passing glance to begin to make sense of her surreal, and often cryptic, imagery, though much of it may be rooted to figurative traditions. While her more recent works, especially those that have a popular recall (such as the 24 feet x 13 feet mural, Wish Dream, composed of sixteen individual pieces, which sold for Rs 9.6 crore at a Saffronart auction), tend to be towering and oversized, it is her drawings and sketches, in smaller formats and executed with an easy tenderness, which have a more enduring appeal to me. The occasion for this column is to talk about this latter body of work, a selection of which is on display at the Vadehra Art Gallery in New Delhi’s Defence Colony till 2 December.

‘Arpita Singh: Works on Paper’ is a crisp though eclectic collection, put together not so much thematically or chronologically, but rather in terms of the affinity among the individual pieces. On the first level of the gallery, the relatively large and more colourful work appears in clusters, followed by the more intimate pen-and-ink sketches on the upper floor. There are, additionally, sketchbooks and notepads on display, where the ghost of some of the ideas that come alive in the drawings may have been first essayed.

Singh’s work, irrespective of its theme and ambition, is touched by a deeply personal, almost mystical, truth. Broken phrases and stray words are strewn all over her images, not so much as footnotes to the scenes depicted but rather to set up the context to which these may be anchored. These phrases are not exactly the key that unlock a painting but rather act like a keyhole through which you can glimpse at its core.

As Singh had explained to me in an earlier interview, growing up in the 1940s and 50s India, during a time of acute paper scarcity and with limited resources to buy canvas, she was often compelled to take up newspaper sheets to compose her drawings. The choice of this medium as a substitute for pristine white sheets of paper forced the juxtaposition of her drawings on newsprint. And this early habit of seeing words and images in relation to each other perhaps explains the almost inevitable cohabitation of the verbal and the visual in her painterly idiom. Of course, at anotherlevel of metaphor, painting on printed paper also hints at the notion that life seldom gives us a clean slate to draw on. We are always struggling to cover up one mess with another—why should things be any different in the realm of art?

At their most fundamental, Singh’s drawings and sketches are exercises in draughtsmanship, led by her unshakeable belief in the importance of formal training in the basis. An artist has to first learn to make a perfect likeness before complicating it, turning an object into a thought. And it is only after this stage is reached that one can move into further explorations of form and intent. The seemingly mimetic can begin to assume the form of the metaphorical then.

In spite of Singh’s experiments with multiple media and forms, her imagery effortlessly draws us in because of its narrative affinities. Even in the most bafflingly abstract squiggles, one is tempted to read patterns—birds in flight, rain-soaked clouds, the quickening of bodies—and the hint of a story. Some of the men and women in her paintings— the armless sagging torso of an elderly woman or the slackening body of a reclining man, for instance—are already in medias res, in the middle of things that have got them to this point. You have to simply allow them to grow on your consciousness before you can get to the plot of their stories.

Then there are helpful commentaries, like whimsical diary entries, to navigate you through the labyrinth of an innately playful private imagination. The daily rhythms of life and the changes of seasons, are all recorded with steadfast fidelity. As a result, some of the drawings appear before us like the torn page of a journal, recording the coming and going of visitors who bring yellow flowers to the house or the fact of a pen running dry just as a composition is about to be finished.

In terms of their antecedents, these images hark back as much to the European masters (one thinks of the contorting bodies in the paintings of Francis Bacon or the distended figures of Lucien Freud) as to the grotesque features of some of Gaganendranath Tagore’s caricatures. Closer to time, Bhupen Khakhar and his exploration of the suburban sublime comes to mind.

But what gives Singh’s ongoing show an extra edge, beyond her own arresting but whimsical scribbles, are lines from one of the most famous poems by the Bengali writer, Jibanananda Das, stencilled on the walls. These references also signal the literary texture of her work, her lifelong investment in Bengali literature, which was her initial choice of subject to study in college, before she opted for the fine arts. It also links her to a line of painters, especially those belonging to the so-called Bengal School, who diffused the boundaries between literary and visual idioms. Tagore is an early example of a master who turned to his own writing for artistic inspiration; often creating faces and patterns out of a nest of words and scribbles. Closer time, one is reminded of artists like Ganesh Pyne, who went back to a range of texts, from the Mahabharata to Shakti Chatterjee’s poems, and made these a part of his work.

One of the most significant poets after Tagore, Jibanananda Das was an icon of post-modernism in Bengal who died relatively young and an unsung genius, more of a cult figure who was revered for his haunting imagery and versification. The words that appear at the exhibition have been translated into English from one of the masterpieces he wrote, Aath Bachhar Ager Ekdin (‘Eight years ago, one day’), a poem that, like almost everything he wrote, is equal parts bleak and troubling.

To paraphrase, rather inadequately, it begins with a seemingly straightforward narrative, the story of the corpse of a man being taken to a morgue one night. The poem then goes on to establish the facts of the deceased man’s past. He was, we are told, by all accounts, a regular householder, with a wife and a child, and the promise of a future that looked as hopeful as any other. And yet, one night, he was besieged by a desire for death. His sleep was invaded perhaps by a ghost—or perhaps he hadn’t slept a wink for all of eternity. And in that state of inhuman exhaustion, he heeded the call of the beyond, walking away from a life of possibilities to seek a peace that passeth all understanding.

With this grim preamble, the poem moves further and further away from the specifics of the man’s life, towards questions of volition and choice: what makes a seemingly self-content individual lose control over life and yearn for a taste of death? How does the weight of human condition fill us up with such inscrutable melancholy? What inexplicable weariness settles into the soul that can only be redeemed inside the cold interiors of the morgue? With the death wish as its central motif, the poem dwells on mortality, melancholy, the fragility of our relationship with the world of circumstances. In the process, it turns into the beacon that we must shine on the images surrounding us in the gallery to begin to make sense of the stories they want to tell us. And it is this ability to form bridges between several modes of consciousness—the visual, literary and the philosophical— with one subtle masterstroke that makes Singh’s work so compellingly original.

As we move among the images, with these words from the poem humming in our minds, we learn to read each gesture, facial expression and arrangement more keenly— until we are left holding a complex of thoughts and feelings in our heads, all converging in and emanating from the images on the walls.

Few works of art, and even fewer artists, have this gift to move us in so many ways by simply alluding to a few lines of verse.