Artists have long equated beauty with truth, but the truth is that beauty only exists in relation to something less beautiful. Beauty shines in the juxtaposition. For every Bulgari there is something truly Vulgari 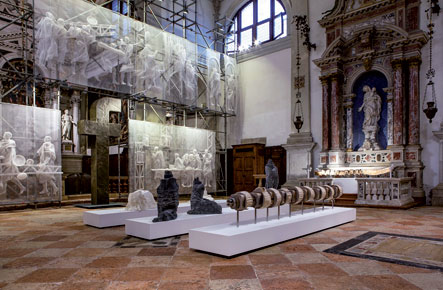 When I married an Italian man I had hoped that the Italian language would pass osmotically into the Wernicke’s area of my brain. This didn’t quite happen, although I did pick up some key phrases. My first Italian words were: Che bella! (‘how beautiful’). Along with che palle (a polite translation would read: ‘that sucks’). Complaint and rapture are two poles between which Italians happily travel. But pushed to choose between the two, I think they would always defer to beauty.

The writer Alberto Moravia once said, “In Italy when they say something is beautiful that’s the last word: Italians prefer beauty to truth.” And whenever I visit the land of my husband’s birth, I’m inclined to agree. Because while the streets where my husband played as a child are dank and gloomy thanks to the perpetual raincloud hovering over it at the feet of the Little Dolomites, and besides which, the province has the dubious honour of having the highest percentage of rainfall, alcoholics, suicides, nuns and lap- dancers in the country—there’s no denying that on a sunny day this place has got a certain dolce vita thing going for it.

Italian beauty is unlike any other kind of beauty in the world: languid, uncontainable, irresistible, operatic. In its dimensions it is bulimic rather than anorexic, spiritual and libidinous simultaneously. It is quite often imperfect, (although never in the case of Michelangelo). And it is always inventive: think the Renaissance, Dante, Leonardo da Vinci, La Traviata, a ruin of a chapel on a Tuscan hillside. Think Sophia Loren. Think pizza. What’s more, Italian beauty is contagious. Surround yourself by Italians and notice your style quotient immediately notch up a rung. It might be a simple touch like the right pair of sunglasses, or the exact location on your shirt where your button should be left undone. And while things have been going the lowest common denominator way since the Berlusconisation of Italy, most inhabitants of that boot-shaped nation still hold to the idea that they have some kind of mafia on the beauty turf.

For a decade now, I’ve been visiting Italy on an annual basis. I spent six months in Venice once, wandering around like a drunken honeybee, dazzled by the incongruity of so much beauty. In Watermark, Joseph Brodsky’s homage to Venice, he describes how the city challenges everyone to be more beautiful. ‘The surrounding beauty is such that one instantly conceives of an incoherent animal desire to match it, to be on par. This has nothing to do with vanity or with the natural surplus of mirrors here, the main one being the very water. It is simply that the city offers bipeds a notion of visual superiority absent in their natural lairs, in their habitual surroundings. That’s why furs fly here, as do suede, silk, linen, wool, and every other kind of fabric.’

Thomas Mann’s Death in Venice takes a different lens to the city. His is a story of moral decline and thwarted paedophilia. An ageing writer goes to Venice to recuperate, and there he falls in love with a beautiful, blond, 14-year-old Polish boy. The setting is the dawn of the 20th century. The streets of Venice are riddled with cholera. Instead of fleeing, the ageing writer stays, so he can continue to gawk at young Tadzio frolicking on the beach. This infatuation is his undoing. In fact, he catches cholera and dies miserably. Moral of the story: Don’t be a paedo on the Lido. Or, alternatively, the pursuit of beauty might kill you.

Artists have long equated beauty with truth, but the truth is that beauty only exists in relation to something less beautiful. Beauty shines in the juxtaposition. And while the definition of beauty is something that belies boundaries— one man’s Tintoretto is another man’s tchotchke—beauty is best grasped at in the comparison. And so, for every Venice there is a Mestre—a satellite town of such industrial ugliness, it’s incredible they exist side by side. For every Bulgari there is something truly Vulgari.

What happens when beauty begins to erode, though? When a city starts to sink, or the body begins to age? Trends change, aesthetics alter. Beauty that was once paramount begins to fade against the bloom of the new. Hordes of middle-aged women with Angelina Jolie trout pouts are a testament to this problem. They stand alongside the scores of middle-aged men who chuck Rogaine on their scalps in the hope of inducing Chia Pet like hair growth. Far more interesting than beauty itself, is the struggle to hold on to beauty. As with all the other things we cling to so dearly— childhood, shoulder pads, life itself—at some point, you just have to learn to let go.

As a poet with a healthy fascination for death, it has always perplexed me that people concerned with living the bella vita aren’t equally concerned with the bella morte. Some weeks ago in Milan, over dinner, a friend confessed that she was in a conundrum. Her 99-year-old father-in-law had requested to be taken to Switzerland for his next birthday. Switzerland was code, I found out, for Dignitas—a centre for assisted dying. “That’s so evolved,” I exclaimed. After all, so few of us get to choreograph our own exits. But my friend was mortified. “How can he ask this of me?” she said. “There’s nothing wrong with him. He’s just old!”

I wanted to say to my friend, “Maybe life just doesn’t give him tokimeku anymore.” For those of you who’ve been lying under a rock for the last six months and don’t know that tokimeku is the thing that sparks joy, you need to go to your nearest bookstore and buy Marie Kondo’s The Life-Changing Magic of Tidying Up: The Japanese Art of Decluttering and Organizing. Kondo’s book is about how cleaning up will transform your life. She suggests hauling all your stuff out on the floor (by category) and picking each item up to see if it sparks joy. If it doesn’t, you need to let it go so it can spark joy for someone else. Kondo deals with the business of material things, but her approach is essentially religious: purge and forever be altered. I don’t see why we can’t apply the same principle to our time on the planet.

Stephen Hawking recently said, “To keep someone alive against their wishes is the ultimate indignity.” He also said he’d be damned if he dies before unravelling more of the universe. In my mind beauty, life and death are inextricably linked. To long for a beautiful death seems as legitimate a claim as to hope for a beautiful life. And yet, to speak of being an architect of your own death in many cultures is anathema, which is perhaps why assisted suicide is only legal in eight countries and five US states.

Some years ago, Martin Amis created a furore when he said Britain should install ‘suicide booths’ for the elderly. He warned of a ‘silver tsunami’, which would create a civil war between the young and the old. “There’ll be a population of demented very old people,” he said, “like an invasion of terrible immigrants, stinking out the restaurants and cafes and shops…. There should be a booth on every corner where you could get a Martini and a medal.” Amis defended his statements saying that existentially, it’s more terrifying to feel that life is something you can’t get out of. But perhaps a more eloquent guide to ars moriendi is Atul Gawande’s Being Mortal: Medicine and What Matters in the End.

Italy’s foreign minister says that the country is dying. The birth rate is the lowest it’s been since the making of the nation in 1861. I thought about this and about my friend’s 99-year- old father-in-law dreaming of Switzerland as I walked through the giardini of the Venice Biennale this summer. Each pavilion was supposed to showcase ‘all the world’s futures’, but mostly the art went over my head. There were flashes of beauty here and there, but the real treasure was to be found in the Sant’Antonin Church away from the main pavilions. Here, an installation called Conversion showed the birth of a new religion. At the altar stood a giant Facebook cross.The bas-reliefs made of polyurethane, plastic mesh and other recycled materials showed the apostles holding tablets and phones. The exhibit’s curator says that the idea was to juxtapose the Christian Enlightenment with the digital revolution, to demonstrate how sacred knowledge that once used to reside in the heavens now lives in the virtual cloud. If Italians can make space for these ‘preachers of new technologies’ and a god made of recycled rubbish, maybe they’ll eventually concede that a beautiful life deserves a beautiful death.

It’s impossible to imagine what our civilisation will look like to future generations of humans. If we are really entering the age of the sixth mass extinction as some scientists claim, then all this talk of life and death is meaningless. But just as a precaution, perhaps we should all be having conversations with our loved ones about how we’d like to go if we’re so lucky as to be able to choose. For the record: I’d like a view of the ocean, and for someone to please pass the barbiturates.