Among the Digital Dissidents

I have not found a better creativity-of-dissent narrative than Emily Parker’s Now I Know Who My Comrades Are: Voices from the Internet Underground 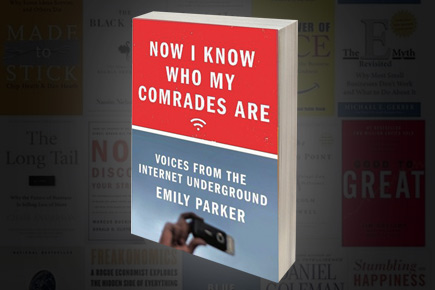 I have not found a better creativity-of-dissent narrative than Emily Parker’s Now I Know Who My Comrades Are: Voices from the Internet Underground

Censorship is the mother of metaphor, said Borges. When Stalinist jackboots controlled the street and the commissar demanded complete copyright over conscience, the smartest still outwitted the proofreaders of public taste in Eastern Europe and Soviet Russia. It has been said that, and justifiably so, communism, in spite of its terror or because of it, gave us some great novels and movies. It was an era when adversity enriched imagination, even if, more often than not, a one-way ticket to the Gulag was the price. In the post-Wall outbreak of freedom, it was a different story, and a serious existential trauma for the writer suddenly thrown into sunlight. The writer unsettled by the plain certainties of freedom, best illustrated by Waiting for the Dark, Waiting for the Light by Ivan Klima, himself a Velvet Revolutionary of 1989. The collapse of ideology, in retrospect, did not result in ideas of democracy—or in the repudiation of hate—everywhere. And elsewhere in the world, the terror of faith was getting as dehumanising as the terror of ideology in the last century. The only constant was the creativity of dissent. The Samizdat of the communist era was replaced by the Blogosphere of the twenty-first century.

And I have not found a better narrative of this creativity than Emily Parker’s Now I Know Who My Comrades Are: Voices from the Internet Underground (Farrar, Straus and Giroux). An expert in digital diplomacy, Ms Parker earlier worked as an op- ed editor at The New York Times and at The Wall Street Journal. This book is essentially her conversations with cyber dissenters from three countries with varying degrees of unfreedom— China, Cuba and Russia. Her argument, which is mostly a celebration of the virtual romance of resistance against paranoid tyrannies, has yesterday’s headlines as backdrop: the power of social media and the Arab Spring—and most poignantly, the Facebook page after a blogger-martyr, ‘We Are All Khaled Said’. Tahrir Square was sustained by the solidarity of internet revolutionaries, and their triumph, in spite of the Muslim Brotherhood, was historic: it brought to an end one of the most stable and seemingly infallible dictatorships of Arabia.

Still, in places like Beijing, Havana and Moscow, freedom continues to be edited and abridged at the Headquarters, and these are the places where Ms Parker seeks her subversives. In Beijing, the story of Zhao Jing—known in the parallel republic of cyberia as Michael Anti—is the story of the other side of the Chinese miracle. The China of, to borrow a Cultural Revolution slang for rebels, counter- revolutionary bad eggs. They breach the Great Firewall of China through proxy servers and the brotherhood of bloggers, and Anti is a hero here. He, once a Communist sympathiser, had his moment of epiphany when he saw first-person accounts of the Tiananmen crackdown and pictures of bodies crushed by tanks on a dissident website. He is a wangmin, a citizen of the internet, one of the most prominent among those who continue to defy the pinstriped mandarins of Zhongnanhai. “I no longer believe the propaganda, it is dog shit; I no longer believe any Chinese journalism textbooks, they are garbage,” Anti says, and it is the representative voice of a generation that is not mesmerised, as most Indians are, by the Great Mall of China. A country afraid of its own people can never be a global power, its rate of growth notwithstanding. That is why China is the most dreaded stealth power of our time.

In Cuba, a make-believe of the Revolution, El Comandante may have retired from public life, but it is the spirit of Fidel Castro that drives his brother, the new ruler. As Ms Parker’s conversations—or, shall we say whispers?—with digital desperados reveal, Cuba is another Socialist Republic of Fear. ‘Nunca sabe quien es quien’ (you never know who is who) is a warning that the writer comes across very often in Cuba. There is always a third shadow, darker. A blogger rebel tells Ms Parker: “When I made the decision to write, I was aware that they would rummage around in my past, particularly for personal secrets that I might have,” she tells Ms Parker while narrating her life as “a laboratory rat” in the surveillance state which continues to be rhapsodised by purveyors of Che chic and Castro machismo. The dying dictator might have enjoyed the company—and the novels—of his friend Garcia Marquez, but his country is too fragile to be cracked by the onslaught of a few blogs. The blogger is never alone, and to know why, ask Laritza Diversent, who calls her blogs ‘the place where we give life to our land’. In such a land, the dissident alone lives in truth. The other such land where Ms Parker meets her blogger- blasphemers is Russia. “My laptop—that’s the only media resource I have,” one of them tells her. The blogger as evangelist even mobilises people against corruption in a Russia where street protestors have already lost their fight against the post- Soviet autocracy.

The three countries that Ms Parker visits, taken together, tell the larger story of the struggle against what she calls ‘isolation, fear and apathy’. This is a struggle as old as the lies of ideologies and the perversion of their keepers. The internet offers more than the frustrations of abusive neo-literates; some of the most influential counter-texts of freedom are found in the digital Samizdat.