A Tale of Two Exclusives 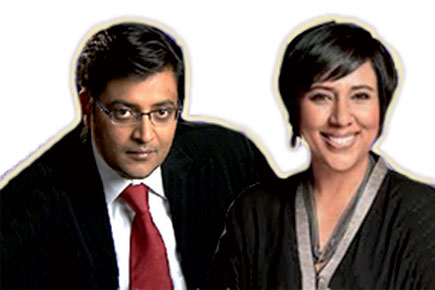 
A day after the rape in Mumbai, between indignation and fulmination, between Times Now and NDTV, there was also this—Raj Thackeray on his two-state theory about crime, and Amitabh Bachchan on the horror of the incident.

On any given day, Thackeray is calculated spite and rhetoric to the point that no one is surprised or offended anymore. In his interview with Arnab Goswami, he blamed crime in Mumbai entirely on migrants from Uttar Pradesh and Bihar but with the caveat that he was not talking specifically about the rape case. The rider was a deliberate one in the event that the rapists were not from those states. He asked to be put in charge of Maharashtra in order to control ‘them’ while again issuing a caveat that he was not demanding this as an election spiel. It was a strange sort of interview.

Goswami, who usually has 40 exclamations and expostulations for every comment from his guests, was meek as a mouse and mewed like a cat face-to-face with a bigger bully. What became clear is that since the interview, as decided by Thackeray, would not be about the rape in specific, all it was doing was allowing him to foment the xenophobia that runs the blood in his party’s veins. Now we read that all the rapists were born in Mumbai and Thackeray had been astute in giving himself that escape clause. But Goswami will probably not question him on that.

Bachchan was on NDTV with Barkha Dutt a day after the rape too. Bachchan’s interview in her special edition of The Buck Stops Here started after 45 minutes of rage and anguish by Dutt and her panel over the rape. As Bachchan came on screen, you noticed that almost all of Dutt’s questions in the beginning were laced with the word ‘satyagraha’. That happens to be the name of Bachchan’s forthcoming movie. These are parts of some of those questions put to him: “Amitabh Bachchan, as the central protagonist of this movie, you are…”

“You spoke about how satyagraha can deliver change in the context of the Delhi gangrape. Here you are in your city, where a 22-year-old gets gangraped. She’s out on assignment, and here you see people angry, continuing with their satyagraha so to speak. Do you see a resonance on what you were conveying in cinema to what happened in Mumbai just last night…”

‘‘Do you see this anger of the ordinary person out on the streets that your new film also explores? Do you see it as healthy or anarchist in nature…”

The promotion of a movie is a marketing exercise designed to increase box office collections. So what has happened is the clubbing of profit for Satyagraha’s makers with the rape coverage. Once you see through that, what seems a normal interview suddenly becomes distasteful.

It is probable that Goswami and Dutt thought these were legitimate editorial calls. Any other day it might have been. Thackeray is hard to get for an English news channel to interview, and whatever he says will make news. Likewise, superstars are only available when one of their films is releasing. Both these personalities will only come if some private purpose is served. All that would be understandable if not for the fact that these two journalists had throughout those post-rape days been railing about society, values and morality. They were serving righteousness by the minute, which suddenly took a backseat when it came to self-interest and the promise of an exclusive.

It’s not just news anchors who stand on lofty pedestals in emotionally surcharged atmospheres like the present one. How can you comprehend your own failings when everything else is flawed under the shadow of shock, anguish and outrage? If you are the voice of outrage, then promoting a movie under the garb of a discussion on rape is a low point as much as anything else. Or maybe not. Letting a politician get away with criminal profiling of migrant communities might be below that.