A groundbreaking work of staggering genius

It is the slow dance of the mind that animates the pages of Zia Haider Rahman. He holds the planet in his palm and plays with it 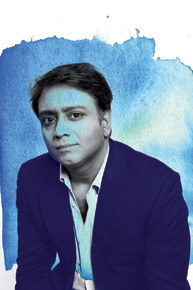 It is the slow dance of the mind that animates the pages of Zia Haider Rahman. He holds the planet in his palm and plays with it

There is a theory of inevitability in literature. Whenever a purist in despair mourns the fin of fiction’s siècle, there comes that breakthrough novel, declaring its attitude and ambition from the first to the last page. A novel that announces to the world, most often self-consciously, the power and possibilities of its art. Zia Haider Rahman’s debut, In the Light of What We Know (Pan Macmillan, 576 pp, Rs 599), is one such novel. First, as a first novel by a writer from the subcontinent, what it is not. It is not about the wretchedness of the homeland, that bestselling monochromatic misery. It is not an action thriller, an Oriental whirl of a story. And its sweep is not limited by either geography or history. It is as elastic and shapeless as freedom, and its capacity to accommodate ideas and arguments matches the best of the big, boisterous Russian novel, without its emotional excesses. It restores, with a confidence rarely seen in a first novelist, the majesty of an art form that best tells the history of man.

More than fifty years ago, Saul Bellow wrote: “Undeniably the human being is not what he commonly thought a century ago. The question nevertheless remains. He is something. What is he? And this question, it seems to me, modern writers have answered poorly. They have told us, indignantly or nihilistically or comically, how great our error is, but for the rest they have offered us thin fare. The fact is that modern writers sin when they suppose that they know, as they conceive that physics knows or that history knows. The subject of the novelist is not knowable in any such way. The mystery increases, it does not grow less, as types of literature wear out. It is, however, Symbolism or Realism or Sensibility wearing out, and not the mystery of mankind.” In the Light of What We Know is one of those once-in-a- generation chances to realize the magnitude of that mystery.

It begins one September morning in 2008, when a middle- aged, brown-skinned man, “haggard and gaunt, the ridges of his cheekbones set above an unkempt beard”, appears at the doorstep of the narrator’s South Kensington home in London. The sudden mention of Kurt Gödel, the twentieth century Austrian-American mathematician known for his theorems of incompleteness, brings together two long-lost friends. One, the nameless narrator, as his address suggests, is an Asian toff, an Etonian and an Oxonian, currently an investment banker whose career is as rocky as his marriage. The other, his old pal from the Oxford days, comes from the grayer side of the social spectrum, his backstory as bleak as the remotest village in Bangladesh, “a corner of that corner of the world”, and as unsettling as post-9/11 Afghanistan. Zafar is the brainiest of vagabonds—mathematician, Wall Streeter, lawyer, UN rapporteur, philosopher at large. Their meeting takes place in the backdrop of the big market meltdown, and the narrator himself is a falling Master of the Universe. And the book is Zafar’s story, which is all about being in the world he has chosen to suffer, to argue and play with.

The story defies chronology and celebrates the joys of digression, like any intelligent conversation between two men whose interests are eclectic—and who are prone to showing off. So you are given a little lecture on mapmaking and cartography: “Maps, contour maps and all maps, intrigue us for the metaphors that they are: tools to give us a sense of something whose truth is far richer but without which we would perceive nothing and never find our bearings. That’s what maps mysteriously do: They obliterate information to provide some information at all.” You are taken to post 9/11 Afghanistan, just another way station in the picaresque of Zafar. This Afghanistan is swarmed by a new army of aid workers: “They were an army in all but name, not the army carrying guns that cleared their path, nor one carrying food or medicine. But they came bearing advice and with the arrogance to believe that they could make all the difference.” Or, an aside on sin and guilt can glide past religions and get caught in the financial crisis of the last decade. You could listen to the argument that “the greatest influence on a writer may be on her psychic dispositions as a writer”. So reading Philip Roth “might clear the way of inhibitions that held you back from writing about reckless desire, the temptations of power, and the immanence of rage, or reading Naipaul might convince you to seize the ego that so wants to be loved, drag it outside, put it up against a wall, and shoot it.”

Zafar the rootless, who could have been a destitute, needs an alternative world of ideas. He has always been the other, the outsider. His parents are not his biological parents, and he is emotionally distant from them. The world he has come to occupy is far removed from the world of his father, an immigrant, a bus conductor in London and then a waiter. As his life took a trajectory that was culturally different from the generation of his parents, he was “engaged in something unnatural and subversive”. From his labyrinthine confessions, it is obvious that he needs the existential exhilaration of ideas—and most engagingly, the poetry of mathematics: “For Zafar, mathematics was always about the journey and not the destination, the proof of the theorem, not merely its statement. After all, what does it mean to say that something is true if you can’t show it to be so? I think that in the journey, Zafar found a home in mathematics, a sense of belonging, at least for a while; it is a world without borders, without time, in which everything exists everywhere forever, and I see now what power such a thing might have over the psyche of someone so rootless.” Someone whose struggles span every conceivable realm the displaced one has to overcome: class, culture and memory. Zafar’s romance with Emily Hampton-Wyvern, daughter of English aristocrats and an Oxonian, is the most elaborate humanization of these struggles.

The range of epigraphs—from WG Sebald to Edward Said to Joseph Conrad to Coetzee to Graham Greene—only brings out the distance this storyteller is prepared to travel in search of a perfect home for the rootless: a home of the mind. Elsewhere in the novel, Zafar says that “an exile is a refugee with a library”. This is the kind of epigrammatic gem you are likely to read in a vintage Kundera. Rahman, in his art, is more European than sub-continental. It was Kundera who said that Europe, the birthplace of the novel, had abandoned its art, and that the tropical East had become its most fertile ground. The life of Rahman—rural Bangladesh, Oxbridge, Yale, Wall Street—to some extent mimes the life of Zafar, but it is not the kinetic energy of an active imagination that turns the pages of In the Light of What We Know. It is the slow dance of the mind that animates his pages. Don’t look for emotional tension or portraits of the so-called inner life; this novel is not burdened by psychology.

More than three decades ago, Saleem Sinai’s first cry in Midnight’s Children heralded a new sensibilility. Like Rushdie, Rahman too holds the planet in his palm and plays with it, but his meditative meanderings mark a different style—and the second breakthrough moment in fiction from this part of the world. It is the staggering achievement of a writer floating in the history of the present.


In the light of what we knowZia Haider Rahman