When He Batted Left-handed

In an innovative strategy to combat unplayable bowling, Sunil Gavaskar came out and batted with his other hand for an hour to save Bombay from an outright defeat. 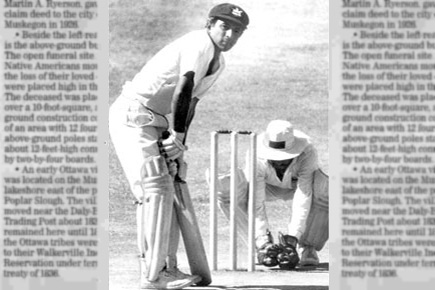 In an innovative strategy to combat unplayable bowling, Sunil Gavaskar came out and batted with his other hand for an hour to save Bombay from defeat.


A Seinfeld episode highlights the problems of making out when the girl sits on your wrong side. George Costanza is seeing Betsy. They have been on nine dates. But George hasn’t gotten anywhere. On their previous date, Betsy sat to his right. And George could not do anything because he was useless with his left hand. If right-handers cannot make out with their left hand, how can they bat with it in a big cricket match? Ask Sunil Gavaskar.

Bombay vs Karnataka in the Ranji Trophy semifinal of the 1981-82 season. It is the fourth and final day of the match in Bangalore. The wicket is turning at right angles. Karnataka’s Raghuram Bhat has flattened Bombay with his left-arm spin, taking 8/123 in the first innings. Bombay score 271. Karnataka pile up 470 runs.

In the second, Bombay are 160 for six. They are losing, that much is clear. But they are Bombay, the Dons of Domestic cricket. They have Gavaskar, Dilip Vengsarkar, Ravi Shastri, Sandeep Patil and Balwinder Sandhu. They must at least avoid an outright defeat.

But Raghuram Bhat is impossible to bat against. He has taken four more wickets in the second innings. Gavaskar comes in at No 7, presumably saving himself for later. Left arm spin is more potent against a right-hander because the ball turns away from the batsman. It is not as effective against left-handers. So Sunil Gavaskar becomes a left-hander. He plays around an hour and scores 18 not out. More than 30,000 at the Chinnaswamy Stadium blink. Technically they drew the match, but Karnataka progressed to the final on the basis of their first innings lead.

Gavaskar says, “The ball was turning square and Raghuram Bhat was pretty much unplayable on that surface. Since he was a left-hand orthodox spinner getting the ball to turn and bounce sharply away from the right-handers, I thought that the way to counter that was by playing left handed where the ball would turn and bounce but hit the body harmlessly (without the risk of getting out leg before wicket).”

This was March 1982. Rohan, Gavaskar’s son, was six and not present at the stadium. A few years later, when old enough to comprehend the improbability of his father’s strategy, he too was astounded, like the Bangalore spectators that day.

“Jaw dropping,” Rohan says, recalling his reaction. “I could not believe it and asked my father if he really did it. It is tough to bat on a turning track with your natural side. To do it with your other hand and to not make a muppet out of yourself, to come out on top, shows your skill level.”

Bhat says, “I tried all my tricks. The faster one, armer, Chinaman, Yorker. I bowled round the wicket, over the

wicket, and used the bowling crease. But Gavaskar played with confidence.”

Suru Nayak, the only left-hander in that Bombay team, says about Gavaskar, “He succeeded in avoiding an outright loss for Bombay, something where natural left-handers failed. It showed the genius of the man.” Nayak scored zero and nine.

Asked at what stage of the match it struck him to bat left-handed, Gavaskar says, “The thought was in my head from day one itself. We did not have many left-hand batsmen in the team and I kept thinking how a left-hander would have been able to somewhat negate Raghu’s spin threat.”

Had he discussed his idea with teammates? “I did reveal the plan to the manager, Sharad Diwadkar, who was horrified by it. He tried to talk me out of it.”

Had he any previous experience of batting lefty? “Not even in tennis ball cricket. The difficulty (of the task) was that since I had never ever batted left-handed, the foot movements were hard. But the lack of footwork helped too, as the ball just spun and hit the pads or my body.”

The match ended with Bombay declaring at 200 for nine. They avoided the humiliation of an outright loss. Karnataka, nonetheless, progressed to the final, where they came second to Delhi—on the basis of the first innings score. For Gavaskar, the hurt of defeat outweighed the satisfaction of his maverick effort. Asked how Gavaskar was in the dressing room after the match, Nayak says, “He is a bad loser. He always had khunshipanaa (meaning ‘killer instinct’ in Marathi).”

Opinions are divided about Gavaskar’s provocation to bat left-handed. There are some who believe he did it to prove a point either to the Karnataka bowlers or his own colleagues, who had put on a disappointing show. Only Ghulam Parkar and Sandeep Patil had excelled with the bat for Bombay. Parkar made 84 and 68. Patil hit 117 in the first innings. Vengsarkar scored 41 in the second innings. Gavaskar himself had managed no more than 41 in the first innings, modest by his standards.

“Gavaskar was a big star, but also temperamental. He was above Indian cricket at the time and would do as he pleased,” says a veteran cricket writer present at the match. “I believe his reasons for batting left-handed went beyond cricket.”

So not everyone was pleased with Gavaskar’s ambidexterity. Some players were miffed as well.

“I could understand the adverse reactions,” Gavaskar says. “It was felt that it was done in pique, but it was nothing like that at all. I felt I had zero chance against Raghu batting right handed, and since the match was already decided in Karnataka’s favour, I tried the tactic. If the match was in the balance, I certainly would not have batted left handed. Also, please remember I batted left handed only against Raghuram Bhat. When a right hand spinner came along, I switched to batting right handed again.”

Most evenings, Bombay’s cricket folk of earlier eras – players and coaches and journalists—can be found enjoying sundowners at the Cricket Club of India, Shivaji Park Gymkhana or MIG Club in Bandra. On such evenings, Gavaskar’s temper is discussed as much as his batting feats. These men disapprove of his flare-ups but chuckle at how even his surliness has a certain entertaining quality. A case in point is his falling out with the late Raj Singh Dungarpur and his dramatic resignation from the National Cricket Academy (NCA). It was reported that Gavaskar ‘flung’ his resignation letter towards Raj Singh. Gavaskar later clarified, “I didn’t fling it, I flicked it.”

Milind Rege, the former Bombay player and Gavaskar’s friend, says about the Ranji semifinal against Karnataka, “Sunil might have been rankled by the pitch.” Nonetheless, there is no doubt that the move reaffirmed Gavaskar’s cricketing prowess. “It takes guts to bat left-handed in a Ranji final. And it was indeed innovative,” says Rege.

Gavaskar added himself to the Hall of Fame of sports creativity, taking a seat alongside the likes of Antonin Panenka. Panenka, from the erstwhile Czechoslovakia, invented the cheeky, off-pace penalty in football. He even had the guts to try it in a match as big as the 1976 European Cup final against West Germany. The teams were tied 2-2 in extra time. In the penalty shoot out, Czechoslavakia led 4-3 when Panenka stepped up to the spot. Before him stood the legendary Sepp Maier. If Panenka’s ploy worked, the Czechs would score a major upset and lift a prestigious title. Panenka would be hailed as a visionary. If not, there would be egg on his boot. But so unprecedented was his method, that Maier was beaten. Since then, such kicks are known as Panenkas. Zinedine Zidane struck one in the 2006 World Cup final.

Raghuram Bhat, despite being at the receiving end of Gavaskar’s blade and luck, did not see it as an insult or a sign of arrogance on the batsman’s part. He says, “He was well within the rules. It was great batting. After the match, I said to him, ‘Hats off, sir.’ He patted my back and walked off. That was enough for me.”

R Sudhakar Rao’s 155 and Brijesh Patel’s 78 contributed to Karnataka’s performance. But Bhat was the chief architect, finishing with a match haul of 13 for 200. The spell boosted his reputation and helped him get selected to play for India in October 1983. “It was a good game for me,” Bhat says. “Gavaskar showed how to save a match. Brijesh Patel, GR Vishwanath (who hit a cameo) and Sudhakar Rao showed how to bat on a spinning wicket. I got to play with and against great players.”

As for Sunil Gavaskar, he says, “Now, so many years later, it is hard to believe that I survived 60-odd minutes batting left-handed. Left-handers are generally very elegant, but I must have been the only ugly left handed batsman ever.”