The torment of awaiting a Federer-Nadal final. And the euphoria of witnessing it 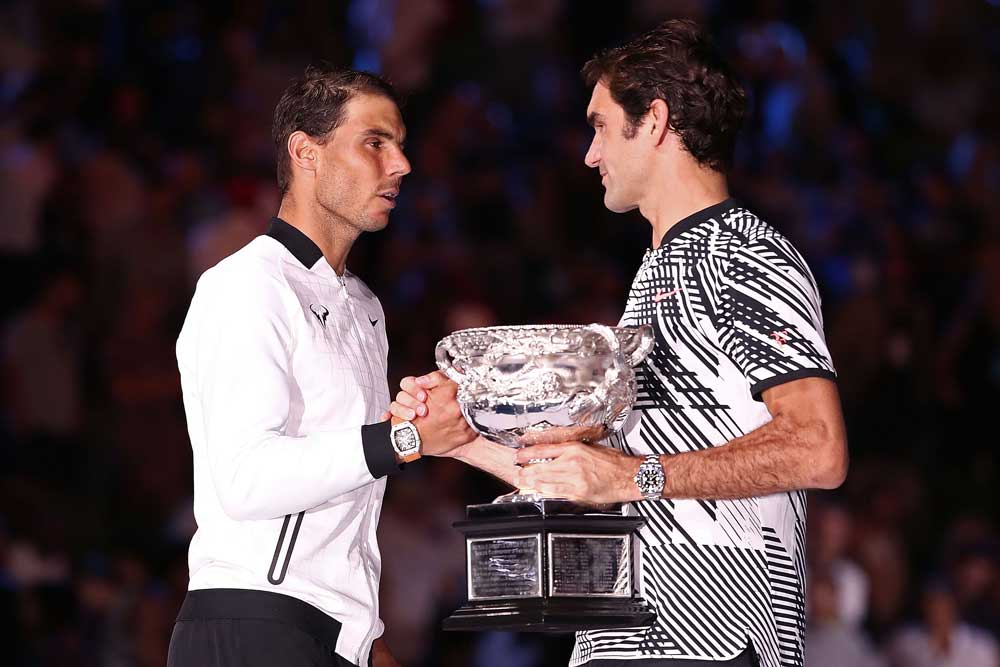 In east Delhi, dawn breaks with the clash of motorcycle horns. The crows caw only after. The screen on my phone displays the time — 7:04 am. The hour feels far more languid than that. Despite consuming half a litre of Scotch the previous evening, I haven’t slept a wink. But that’s not new. It’s been 11 years since Roger Federer and Rafael Nadal first met in a Grand Slam final and life has changed in proportion with elapsed time; I’ve gone from a long-haired 20-year old student of physics in Bombay to a 31-year old journalist with a receding hairline in New Delhi. A sleepless Saturday night before they play on a second Sunday has remained one of life’s rare constants.

The night, relatively speaking, is easier than the day. A Grand Slam final is a late afternoon to early evening affair in India. The Australian Open final begins at 2 pm. The European Slams, French Open and Wimbledon, commence at 4:30 pm. The US Open starts so late into the Indian night that it’s in fact Monday morning. It doesn’t count for another major reason. Federer and Nadal haven’t graced it (yet). Today’s wait from dawn through breakfast (which I shall skip) to lunch (which I won’t eat) is going to border on mania.

7:30 am. A strong cup of black coffee and two cigarettes to high wire frayed nerves. I reach for the phone to speak with the only person certain to be awake at this quiet hour — a close friend in Argentina. A former sports journalist in New Delhi, Raakesh Natraj is now a foreign service officer in Buenos Aires. We text back and forth in cryptic tongues.

“What do you reckon?”

“You’re going with muscle memory, then”

“Yeah! We know Rafa can batter Roger’s backhand in his sleep. The question then is, will RF’s slice hold up?”

“Not quite sure if this surface is conducive for that. Playing faster. And old Rafa’s crosscourt forehand not as penetrating as young Rafa’s”

“Going to be emotional, whatever happens”

Rafa and Roger. We call them by their first names. We speak about them like old friends. We take pride in their glory like siblings. In this family of ours, we have our own version of photo albums — YouTube videos. No build-up to their match is ever complete without sifting through those plastic leaves. I begin with the highlights of their very first meeting in a Slam final. Roland Garros, 2006. Everything about this Rafa is astonishing. The hair, the biceps, the white pirate pants, the whipping top spinning forehand, the intensity with which he pounds Roger’s backhand. In the first set, Roger skips around his left and replies with artistry — inside out shots. But Rafa has tired him out by the second with the sheer brutality of his ploy.

In 2012, the newspaper I worked for sent me on tour Down Under to cover the CB Series — a triangular involving India, Sri Lanka and hosts Australia. I had better plans. Instead of reaching Sydney in the first week of February, I landed in Melbourne in the last week of January, six hours before the Rafa-Roger semifinal, armed with an accreditation for the press seats and an extra carton of Classic Milds. It didn’t go down too well with the Australian Border Force at the airport, who made me walk the dreaded blue line to the detention room.

Following a 45-minute wait, a grim, middle-aged officer summoned me, and my backpack, for an inspection.

“What’s the purpose of yer visit?”

“Here to cover the Aussie Open.”

The officer stopped unpacking my bag and said: “Good on ye, mate. Hope Roger doesn’t go belly up tonight. And I’ll letchya keep the ciggies if ye promise to swing by with his autographed hat someday.” Roger did go belly up that evening, a no-contest in the third and fourth sets really. But how bad could witnessing the greatest rivalry in all of sport in your first live Grand Slam match really be?

Today, I’m certain, is going to be even more special. Even on TV. Perhaps the most special of all their match-ups. Perhaps because of just how ridiculously unexpected them meeting again on a second Sunday really is. Roger hadn’t played competitive tennis for six months due to a leg injury. Rafa, struggling with a wretched wrist, hadn’t made the quarterfinals of a Slam in his last six attempts. Roger is seeded 17th, Rafa 9th. Both are in their 30s. Neither have won a Slam in three years. Neither would’ve dreamed of coming this far. Just ask Roger.

“I went to open Rafa’s academy in Mallorca a few months back. I was on one leg and he had the wrist injury and we were playing mini-tennis with some juniors and we were like ‘that’s the best we could do right now’,” he told Jim Courier during his post-semifinal interview. “Few months later we are in the final of a Grand Slam. So it’s already special for the both of us.” Special enough to break my Sunday rule: I head for a shower.

Hot water on a cold morning with Radiohead’s Amnesiac for a background score can be a spiritual experience. God exists, I tell myself, and he or she is a fan of this rivalry. And he or she aligned the stars to make it happen one more time. How else can you explain Novak Djokovic, winner of six out of the last 10 Slams and five out of the last six Aussie Opens, losing to world number 117 Denis Istomin in the second round? How else can you explain world number one Andy Murray losing to journeyman Mischa Zverev, ranked outside the top 1000 a couple of years back, in the third round? From the stereo, Thom Yorke croons knowingly.

“You really have gone a bit woozy in the head, no?” remarks my wife as I step out of the bathroom. Shreya is in the middle of breakfast — shakshuka, toast and a glass of buttermilk. She’s wearing a ‘Vamos Rafa’ tee-shirt that she bought at last year’s US Open. And she’s also still amazed at my Sunday bath. “Rafa and Roger really have a way of altering your life choices.” True.

In 2005, some three hours before their first meeting in a Slam, the semifinal of the French Open, my girlfriend at the time demanded that I pick her up on my motorbike from a bar in central Bombay and drop her home in the outskirts. By the time I was back to my telly, Roger was serving a break up in the second set. It was the last Roger-Rafa set that I missed. And it was also the last time I cared about someone who didn’t watch tennis.

At 1 pm, an hour before the final, I receive a call from my high school chemistry professor. To some of us kids in our boarding school, Satyajit Banerjee was a whole lot more than that. He was our life guru, introducing us to Lou Reed, Akira Kurosawa, Bengali dhotis and most significantly, tennis. He would spend hours regaling us with tales of Nastase and Borg and Evert and Navratilova — scorelines etched in his memory. Then he would spend even more hours planning tennis tournaments for the children, in which he would promptly participate. If he won a match he would punch his fist in the air and if he lost, he would throw a tantrum like his hero, McEnroe. All against school kids, lest we forget.

In 1999, on the day of the Agassi-Rafter semifinal in Wimbledon, Satyajit Sir made me fake a toothache so he could escort me on a dental trip to Madanapalle, the town closest to our TV-less boarding school. But today, the man who helped me take my baby steps into a world I cannot live without has called me to say that he can’t get himself to watch the upcoming Rafa v Roger match.

“I’ve been dreading this day, Iyer. I cannot take another Roger loss.”

“Oh come on, sir. Look at the bigger picture. This match is a celebration of them. Of us!”

“Then pray for Roger this time. Let God give him this one. Rafa can have the next ten!”

For him I wear my RF cap. Also perhaps to balance the energies in the room. Shreya is a Rafa nut. But she has assured me that today’s match is already victory enough. The examination is almost underway. Rafa and Roger are in the tunnel of Rod Laver Arena. Shreya caves first. She pours herself a stiff glass of Old Monk and Coke. I can still feel the effects of Saturday’s nervous binge, but I join her with a generous pour of Scotch. The other intoxication begins.

The next four hours are a stupefying blur. Roger takes the first set, so we root for Rafa. Rafa takes the second, so we root for Roger. When the match goes to a fifth we stop rooting. Now we’re grinning. Now Rafa has the early break in the decider but Roger breaks back. Then he breaks Rafa again. Now Roger has match point. Now he has another. And another. Now he has won and he’s sobbing. Now I’m sobbing. More than Roger.

In the darkness my phone glows. It’s a text from Satyajit Sir. “I can now retire from tennis in peace.”