Track Two to the Olympics 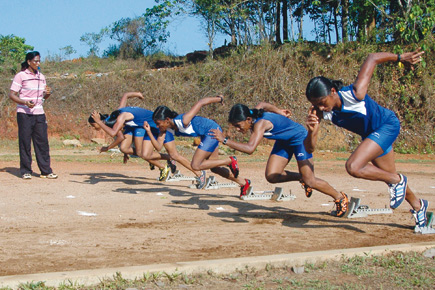 
KINALOOR, KERALA ~ It’s 7:45 am on a Saturday when I drive up the barely-used road leading up to former athlete PT Usha’s Usha ScHool of Athletics (USHA). An open field converted into a 400m athletics track lies right under a hillock next to a small waterfall. It has been raining all night. The air is damp. There are puddles on the track.

Sixteen girls, nearly all in their teens, are warming up. Near the finish line of the muddy track is PT Usha in track pants and T-shirt, her stony face almost exactly the same as it was in her days as an active athlete. Usha blows a shrill whistle. Four girls who look no older than 15 begin a 200m sprint. The girls pant and gasp visibly as they reach the home stretch 100 metres away. Usha looks at her stopwatch and shouts “17, 18, 19…” [seconds].

The four girls rush past the finish line, stagger to a halt, pick up water bottles, and slowly walk along. Usha strides up to say, “Seven minutes recovery before the next 200m run.” Usha’s husband Srinivasan silently scribbles the girls’ timings on a notepad.

Another girl gets into position to begin a 400m run. Like the others, she has a schoolgirl’s physique—she is short, thin, scrawny. Unlike the others, she runs alone. As she begins running, there’s none of the exhausted flailing that accompanied the earlier four. All other girls pause to look at her.

Usha’s husky voice resounds, “Tintu, go! Faster… 31, 32, 33…[seconds].” As this girl rounds the last bend and coasts onto the home stretch, her stride is still effortless. This is Tintu Luka, Usha’s most promising pupil. At 22, she’s the oldest student of the school. Usha believes she’s Olympic medal material. Luka broke Shiny Wilson’s 15-year-old 800m national record at Split, Croatia, last September, becoming the second Indian woman to do it under 2 minutes. Today, she finishes her practice 400m in just under 58 seconds.

The residential athletics school is in Kinaloor, a coconut-tree-lined village 45 km north of Calicut, Kerala. The squat, small buildings of USHA stand alone in a vast clearing, surrounded by lush green hills, isolated from the hustle-bustle of non-athletic lives; there were no people or vehicles along the last few kilometres of my drive to Kinaloor.

PT Usha is still best remembered for missing the bronze medal in a 400m hurdles photofinish at the 1984 Los Angeles Olympics. Her moment of heartbreak so came to define her that few people remember that she continued running well into her 30s, broke a national record at 34, and retired at 36 in 1999.

As we talk in the cool, spacious office of the all-girls school, Usha says she succeeded in spite of India’s sporting system. She went to the Olympics with minimal international exposure. She trained on mud tracks, without good gymnasia or body conditioning facilities. She had little expert guidance on practice, strategy or diet, and got very little funding and sponsorship.

Usha decided to start her school to help Indian athletes overcome the shortcomings of the Indian sporting system, and to help them succeed internationally. But between the idea and its execution lay a huge chasm. When she announced her plan, getting financial aid was far tougher than she expected. Usha figured her name would open many doors. Yet, doors were slow to open. There was little government assistance and no private sponsorship, even in a state such as Kerala with a good record of athletics success.

Usha was finally able to get the school off the ground in 2001, but the first years were difficult. The school had to function on cramped rented premises. The accommodation was spartan, and girls had to train on a non-standard 200m mud track in the middle of Koyilandy town, that too in a field open for public use. There wasn’t enough money for good training equipment and nutritious sports diets.

Slowly, things got better. In 2006, five years after the school opened, the Kerala government donated land for a new campus. Then Sobha Developers sponsored the construction of a new school building, and the families of three Infosys founders—NR Narayana Murthy, Kris Gopalakrishnan and SD Shibulal—adopted athletes, committing themselves to bear their expenses. Earlier this year, the Central Government sanctioned funds for a synthetic track, though the funds are yet to be released and the track will take some time after that to lay.

While USHA has greater financial stability than ever before, it still lacks the funds needed for the kind of world-class preparation it aspires to. Most international races are hosted on a synthetic track. But USHA’s athletes have had to practise on a mud track. To recover from strenuous workouts, most international athletes use swimming pools; USHA’s must take dips in the trackside waterfall basin. Most world athletes use state-of-the-art gymnasia; the school got itself basic gym equipment only a few months ago, sponsored by Olympic Gold Quest, an NGO led by Geet Sethi and Prakash Padukone. At this point, Usha smiles and says there wasn’t enough space for the gym equipment, so the school had to convert its TV room into a gym.

Since the beginning, Usha has held that her objective is to produce Olympic champions. She says that to produce tomorrow’s medallists, she’s been trying to build a training programme that differs from India’s own sports system as much as possible.

This year, the school’s selection camp was attended by about 500 applicants, five of whom made it to the school. Selected girls must meet periodic performance targets, and they’re asked to leave if they miss them rather too often. The trainees are put on carefully planned diets, with inputs from the Central Food Technological Research Institute, Mysore. They receive ayurvedic massages from doctors who drop by from nearby Calicut and work pro bono. The floors of the school’s rooms and dining hall are spotlessly clean, a world apart from chaotic sports schools elsewhere in India.

At most athletic meets held in India, USHA students stay at proper hotels instead of the typically dingy classrooms and dusty halls—with filthy common toilets down the corridor—that are converted into overnight dormitories for participants. And while other athletes seek spots of relief through bursts of (often liquor laced) late evening revelry, USHA students rarely lose the discipline demanded by their sport.

Usha typically accompanies her athletes to most of the meets, and others on the school staff go if she can’t. Athletes typically never travel by themselves, and they don’t get to talk to the media without Usha’s presence.

The girls’ relative seclusion doesn’t quite prepare them for life after school. Or the spotlight. Tintu Luka, for example, comes across as gawky, uncomfortable and ill-at-ease in TV interviews, even in Malayalam. Most girls at the school can barely speak English, brought up mostly in Malayalam-speaking Kinaloor. The insularity isn’t helped by the fact that there aren’t any girls in residence from urban Kerala or beyond the state.

It isn’t just the girls’ social life that could be hurt by the school’s seclusion. It might hurt their sponsorship prospects as well. Srinivasan admits that USHA girls don’t get the kind of sponsorships that more savvy Indian sportswomen get. The school’s general secretary PA Ajanachandran tells me that it’s difficult to get applicants from cities or other states because USHA is in a rural area and girls must attend a local school for the rest of their education. Re-locating, say, to Bangalore would turn the project financially unviable. There just wouldn’t be enough sponsorship funds to run such an academy in an urban location.

When Usha announced a few years ago that Tintu Luka was Olympic material, she wasn’t even considered among the top athletes of Kerala. She looks more like the girl upstairs, her physique hardly that of an athlete. She’s slight, just 160 cm tall, and not very muscular. But Usha tells me that sometimes she believed in Luka’s abilities far more than Luka herself did; her improvement path has been nothing short of meteoric. In the last three years, she’s lopped a phenomenal 10 seconds off her 800m timing, going from an ordinary 2:10 to a new national record of 1:59.17.

The year 2010 was Luka’s first season on the international senior circuit. She ran two races against world-class runners, finishing 8th at the Diamond League in Brussels and 5th in the Continental Cup at Split, Croatia. The final line-up, as Usha recounts, included “the world champion, the Olympics champion, the world indoor champion, the girl with the world’s best timing this year… [pausing for dramatic effect] and India’s national champion.”

Usha’s voice brims with the high of the occasion: “Who do you think takes the lead? India’s national champion, from the very start; 400 metres into the race, and Tintu still leads. Around the bend, 500 metres, no change… Past the final curve, 700 metres, Tintu is still out in front. At 720 metres, on the home stretch, with 80 metres to go, Tintu herself wonders what’s going on. It’s her second senior race, against some of the biggest names in athletics, and she, unheard of Tintu Luka, is going to win? There was a tiny moment of anxiety and excitement. That was when the big girls swept ahead of her. Tintu finished fifth, broke the national record, and went under 2 minutes for the first time. More importantly, she now knows she can take on the big girls on the international stage.”

After that race, Luka looked set for her first medal soon. But that was not to be. At the Commonwealth Games, she fell behind in the last 100 metres to finish 7th. At the Guangzhou Asian Games, she led in the beginning to burn out towards the end, finishing third.

Luka’s pattern was depressingly familiar by now. Commentators wondered aloud whether she was trying a front-running style in response to pressure, and said that she needed to change it by staying behind and conserving energy for the final stretch. Usha insists, though, that the style suits Luka. “Don’t I know what’s best for her?” she asks, sounding somewhat maternal.

Significantly, Luka’s initial successes and Usha’s public pronouncements of the school’s Olympic ambitions might be bringing about a slow shift in the way its girls look at sport. In a country where most sportspeople take to sport only to get sports-quota college admissions or jobs, and most women quit to get married, the school’s girls have started believing in the possibility of global success. Girls at USHA, even those in their early teens, are clear that they want to take up athletics as a genuine career.

Usha says that there are 14- and 15-year-old girls at the school who are well on their way to becoming as good as Luka. The school’s best under-14 and under-15 timings in 800m by Luka have already been broken by the school’s emerging star: 15-year-old Jessy Joseph.

As Tintu Luka prepares for her second international season, leading up to the 2012 Olympics, and the second generation of Usha’s protégés start to come of age, advanced equipment and international exposure will be critical to the school’s progress. With USHA’s cash position still so precarious, however, salaries, food bills and other expenses continue to pose problems. “If things continue this way, the school will find it difficult to sustain itself,” says Ajanachandran, pausing to add, “But the 2012 Olympics might change everything. We’re all waiting for it.”